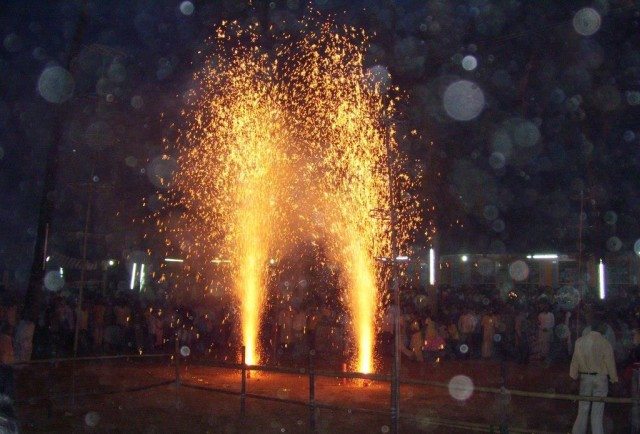 Ground Report | New Delhi: Holika Festival; Choti Holi or Holika Dahan is celebrated across India today (March 17). The main festival of colours Holi will be celebrated on the 18th of March. The festival brings with it a lot of colours, happiness and delicious food.

On the day of Holika Dahan, people light bonfires to celebrate the victory of good over evil. Today it is associated with the story of the demon king Hiranyakashibu and his son Prahlad. Here is everything you need to know about Choti Holi aka Holika Dahan.

The Holika Dahan mantra is chanted while burning a bonfire dedicated to this ceremony. He dedicates and prays to the spirit of Holika for maintaining peace and happiness. The prayer concludes with walking around the fire three, five or seven times with bowls of water. Then, the devotees empty the vessels when the last circuit is completed.

According to Hindu scriptures, Holika Dahan, also known as Holika Deepak or Choti Holi, should be done during Pradush Kal (which begins after sunset) while Purnimasi Tethi reigns. Bhadra reigns during the first half of Purnimasi Tithi and all good deeds should be avoided when Bhadra reigns.

This year, Holika Dahan will be celebrated on March 17. It is the day of the full moon of the Phalgun month.

Shubh Muhurat (according to Drikpanchang)

On the day of Holi or otherwise known as the day of colours, people get stained with colours. Delicious gujiyas and ‘bhang’ are also an integral part of Holi celebrations in India.

Barpeta is a small town in Lower Assam, 100 kilometers west of Guwahati, the state capital. Barbeta is the centerpiece of the “vaisnavate” culture in Assam. All traditions and cultures are based on the 600-year-old vaisnavate philosophy surrounded by the 550-year-old Barpeta monasteries called “Barpita Satra”. (Holika Festival)

The town of Barpeta is always referred to as Dwarka and Mathura in Assam. Barpeta Satra is also called Ditiya Vaikuntha Puri (the Second abode of Vishnu, the second heaven). In the Barpita Satra, Mathura das Pura Ata (Ol Satradikar – Head of Satra Foundation, Monastery) celebrated for the first time a dol festival in the form of Vaikunta (heaven) because Sri Krishna celebrated Holi for the first time in heaven. Then, the festival of Doul is celebrated with Satriya parampara (traditionally) until today in the Barpeta Satra.

The Doul Festival is celebrated for 3 to 5 days. 3 days Doul is called “Burha Doul” and four or five days Doul is called “Deka Doul”. Burha Doul falls in the Assamese month “Chaitra Purnima” (second half of March – full moon) and Deka doul in the Assamese month “Fagun Purnima” (first half of March – full moon).

All festivals of 3 to 5 days mainly celebrate the wedding of Sri Krishna and Rukmini. The first day is called Ganda. It is just like the engagement ceremony or the jaimala reception of the traditional marriage ceremony. In the daytime, the idol Koilababa (the local name of Sri Krishna) and Rukmini are taken out of the prayer hall (manikut).

They were made to wear new clothes and decorations, just like the engagement party. Koilababa and Rukmini are then brought near Meji (meji is fire, like Holika dahan in northern India) and after coming off the meji, Koilababa takes seven rounds around. It is called meji puoa or magh puoa. (Holika Festival)