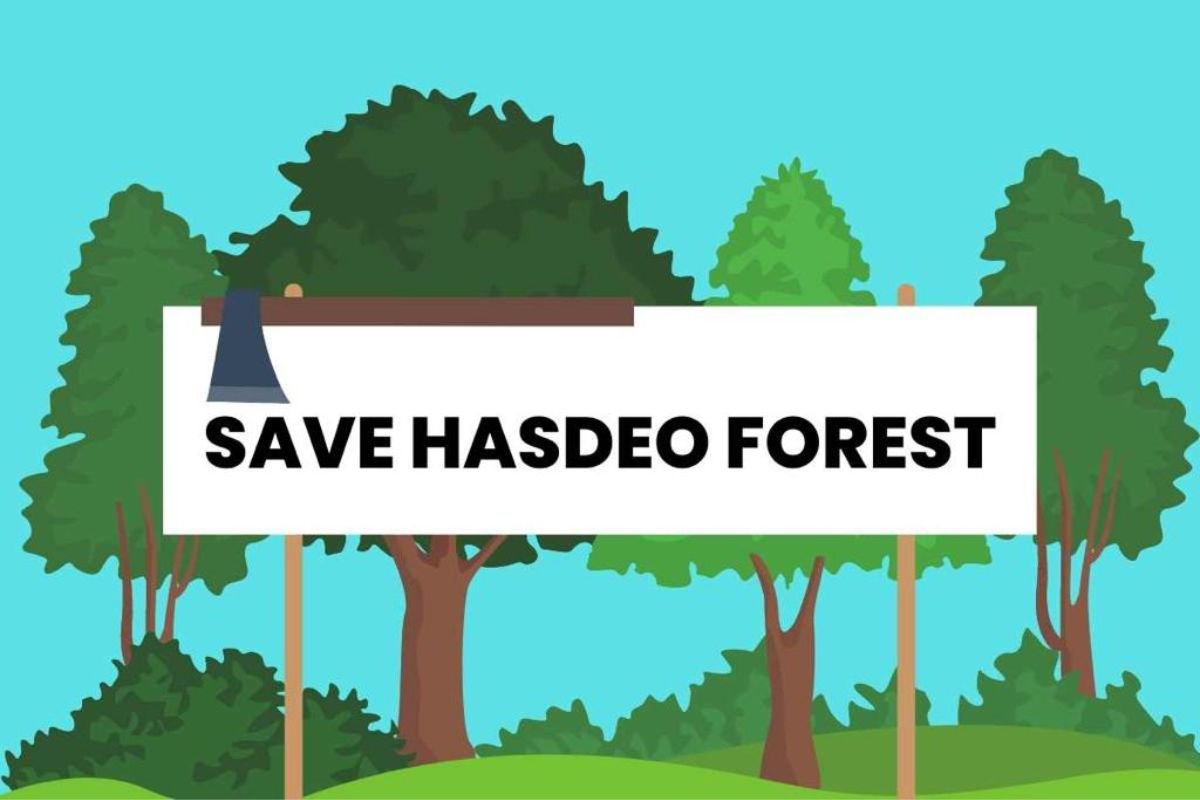 The demand to save the Hasdeo forest has spread all over the country, on Wednesday, there have been demonstrations in many cities of the country demanding to stop the felling of trees in this forest.

Hasdeo Forest is in Danger

The Hasdeo Arand area in Surguja, the northern district of Chhattisgarh, is one of the largest blocks of forests in central India. It is spread over 170,000 hectares and its forests are home to more than 350 species of animals. The unique Hasdeo forest in Chhattisgarh is also home to 20,000 tribal people.

A large number of tribals are going on indefinite dharna in Hasdeo. Muneshwar Porte, a tribal from Fatehpur village, which is now to be destroyed, said: “We are facing a dire situation right now and hence we are protesting indefinitely. If our lands are snatched away then our future generations will lose their identity and our existence will end forever.

Local people have been sitting on dharna for the last 65 days to save the Hasdeo river, forest and its villages, which are in trouble due to various coal projects.

Adivasi and environmental activists belonging to various organizations demonstrated in support of Hasdeo in front of Congress Headquarters-26-Akbar Road in Delhi.

During this, they took posters and placards in his hands and appealed to save the forests and not destroy the tribals for coal. The protesters also sang songs related to the protection of the forest and the tribal culture there.

Alok Shukla, the convener of the Chhattisgarh Bachao Andolan, made up of organizations fighting for the forests of Hasdeo, said, “Hasdeo’s movement has got great success due to this public participation. Today the whole country stands with us in our movement.

He said, “We urge the central and state governments to again take cognizance of their demands and declare the Hasdeo rich forest as a protected area by making it mining-free. Until all our demands are met, the agitation will proceed in a more comprehensive manner.”

The huge Parsa mine, located in the woods where thousands of Gondans, Oraon Adivasi and Dalit live, was approved. In addition to the destruction of land and livelihoods, 200,000 trees will be cut down.

Controversy has escalated over the cutting of trees for mining in Chhattisgarh’s Hasdeo Forest, one of the country’s densest forests. The cutting of trees here was stopped last week due to protests and strikes by tribals, but villagers fear it may resume anytime.

Rajasthan Rajya Vidyut Utpadan Nigam Limited has tied up with the Adani Group which is the developer and operator (MDO) of these mines. Hasdeo Forest is home to tigers and elephants and is rich in biodiversity.

Hasdeo Arand has coal reserves of over one billion metric tons. The Girija and other indigenous people see it as a curse as it is their home. Unfortunately, he says, “everyone wants to devour the land.

The Chipko Movement is a nonviolent resistance aimed at protecting India’s forests. The movement began in the 1970s in response to increasing deforestation for trade and industry. As government-controlled exploitation of natural resources began to threaten the lives of Indian peasants, they sought to stop the destruction by using the method of satyagraha or Mahatma Gandhi’s nonviolent resistance. It soon began to spread throughout the country, becoming an organized campaign known as the Chipka Movement.

India’s forests have long been one of the country’s most important resources, providing livelihoods for forest and rural communities, as well as maintaining ecological balance. During British colonial rule, laws were introduced – known as the Indian Forest Acts of 1878 and 1927 – to allow the government to manage natural resources. These laws gave the state the right to exclusively control the use of certain areas, which had a very negative impact on communities that have traditionally relied on forests for their survival.

The Chipka movement began as a way for rural communities to regain control over forest use. Inspired by Gandhi’s methods, the first nonviolent demonstration took place spontaneously in the Himalayan region in 1973. Demonstrators hugged trees to save them from falling, giving the movement the name “tenacious”, which in Hindi means “hug”. or “hug”. Demonstrations soon began to spread throughout India.

The Chipka movement gained popularity under the leadership of Sunderlal Bahuguna, an environmental activist who spent his life persuading and teaching villagers to protest against the destruction of forests and the Himalayan mountains. It was his efforts that led then-Prime Minister Indira Gandhi to ban pruning. Bahugunais best remembered for the slogan “ecology is a permanent economy”.