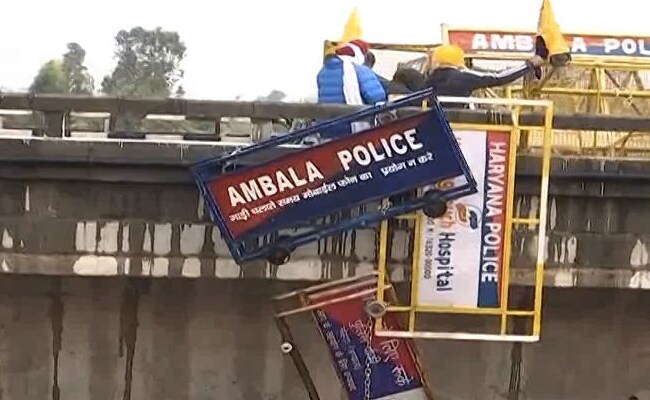 A heavy police force has been deployed along the Haryana-Delhi border to stop the farmers moving towards Delhi. The Haryana Police is also using drones to keep track of movements on the border.

Haryana has border seals adjoining Punjab and farmers have gathered at Ambala’s Shambhu border. Farmers are ready to travel to Delhi with ration, water, diesel, essential goods and medicines in thousands of tractor trolleys from Punjab.

When the police stopped the Ambala-Kurukshetra National Highway to stop the farmers, the farmers got angry and lifted the barricades and threw them down from the flyover. The protesters have also started throwing stones.

The Haryana Police used water cannons and used tear gas to disperse a group of farmers in Punjab. Farmers were allegedly trying to enter Haryana by entering the police blockers under the ‘Delhi Chalo’ march.

About 500 different organizations of the country have formed a joint Kisan Morcha, under whose leadership the farmers are traveling to Delhi on 26 and 27 November.

Punjab: Railways cancelled 41 trains due to protests by farmers

Farmers Protest against Agricultural laws Why is there protest ?

Farmers’ organizations have alleged that with the implementation of the new law, the agricultural sector will also go into the hands of the capitalists or corporate houses and farmers will be damaged.

He says that the products on which farmers do not get MSP, are forced to sell them at a lower price.

The largest share of wheat and rice in Punjab is either produced by the FCI, or the FCI buys it.

During the marketing season of Rabi during the year 2019-2020, Punjab supplied 130 lakh MT of wheat out of around 341 lakh MT wheat procured by the Center.

The protesters fear that the FCI will no longer be able to buy from state mandis, causing a loss of around 2.5% to agents and commissioners.

Also, the state will lose its six percent commission, which it has been putting on the purchase of the agency.