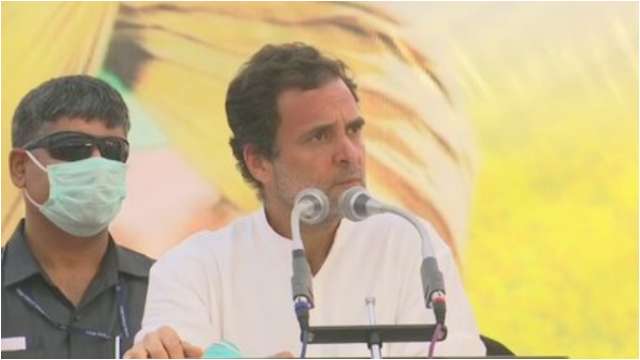 Ground Report| News Desk| Congress leader Rahul Gandhi Tuesday said that the Congress manifesto aimed at developing the agriculture system and improving its infrastructure. This would have included developing markets for farmers and putting a mandi in every 4 kms.

Rahul Gandhi said that in Bhatta Parsaul we fought for land and when Modiji came, he changed it but we fought. Rahul said that one day Modi ji stopped the notes, all the poor-farmers were standing outside the bank but Ambani-Adani was not outside the bank.

The Congress leader said that Modiji implemented GST at midnight, shopkeepers, businessmen were all over. Because they are clearing the way for their rich friends. Agricultural legislation was introduced at the time of covid, as he felt that the farmer would not come on the road due to fear of Corona.

Rahul said that the farmer will die, but will fight for rights. There is a shortage in this system, it is necessary to increase mandis, but Modi is finishing this system. If the market ends, what will the farmer do. He said that today the jawan is standing on the border, but Modiji is buying 8000 crore aircraft.

Rahul said that the Congress will not back down from its stand. As soon as our government comes, immediately we will tear down these three laws.