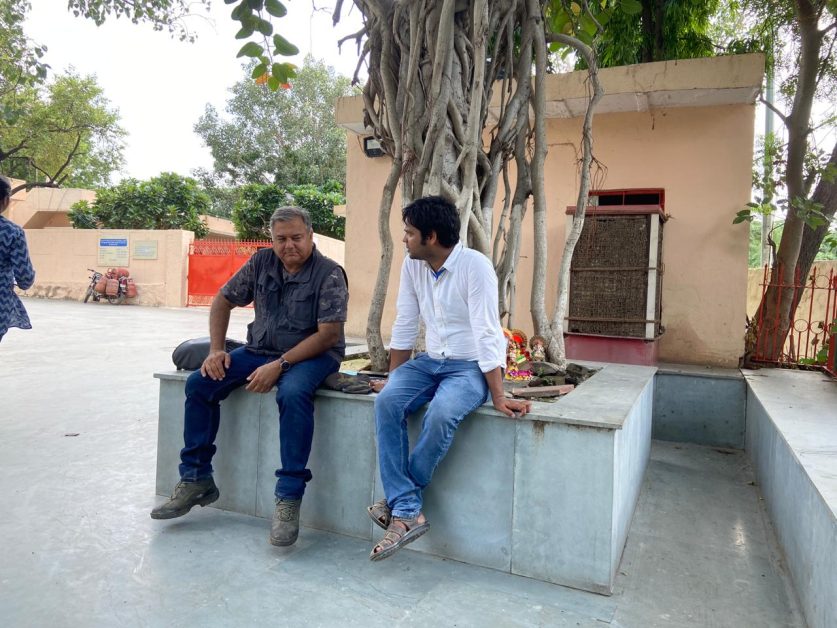 Delhi Air Pollution: In PRS- Delhi Generation next Idea series volume 10, environmentalist Peepal baba said if we truly want to get rid of the pollution then we need a greenery revolution. During winters in Delhi (Delhi Air Pollution) we see the major issue of smog and in response government come up with the short turn solutions. In past years we have seen the odd-even scheme, which become very popular and this year people are encouraged to Switch off their engines on red light. Before Diwali National green tribunal (NGT) has order not to burst fire crackers (Delhi Air Pollution).

Right after the Diwali PR Society Delhi Generation next idea series volume 10 organized a conference to discuss upon the solution of rapidly increasing pollution. In this conference renowned environmentalist Peepal baba was invited as the chief guest. Significantly, this conference is organized by the PR society Delhi and renowned people from different background are invited to attend the conference. People from across the country from different background take part in this PR Society conference and learn about new things which is taking place in our country.

Now fines of Rs 2,000 for not wearing masks in Delhi

In times of corona Peepal baba planted many trees and provided proper water and natural fertilisers. Right after the Diwali Delhi PR society organized the virtual conference which was focused on how can we increase the green spaces. The speaker of this conference was Mr Swami Prem Parivartan also know as Peepal baba. People from government, entrepreneurs, senior public relation professional attended this conference and took active part in the discussion.

Being the part of the discussion people raised the question why winters are not cold as they used to be in past? In reply peepal baba said, It is mainly because of the green spaces which is decreasing day by day and because to decreasing leaf count the carbon level is increasing rapidly.

The other reason of increasing temperature is because the rains pattern has changed in past few years. If we take the example to Delhi NCR, Delhi NCR has lost its rain in past few years. After 2014 Delhi NCR only gets 7-8 times rain in a year which used to be around 100 times per year. The process of photosynthesis which plays important part in rain and with the decreasing leaf count this process is affected badly. Apart from trees water also helps in absorption of carbon from the environment. Delhi used to have thousands of lakes but now only 3000 lakes are left which not enough of absorb the carbon present in the environment. We need to re generate those dead rivers by planting trees around them and in 2-3 years we can see the positive result.

If we really want to fix the issue of rain and then we have to increase the green spaces at huge scale. If we don’t realise the seriousness of this issue now then it would be too late for use to fix it. If we pass year 2026-2027 than we will not able to fix the issue.

Personal data from Muslim Pro app ‘is ending up with U.S. military’

If anyone want to create a jungle then how can they proceed with the process
In context to increase of green spaces a young entrepreneur asked how we can monetize the land and make profits from it. This question made the peepal baba excited to know that young people are also interested in taking part in making more and more green spaces. Firstly, you should get a barren land as barren lands are cheaper as compare to other or used land. Also, if you try to build a forest, farm or even try to do agriculture on the used land then you might not get any result in the process as used lands already have lots of chemical fertilizers.

According to peepal baba in future 2 kinds of people will survive one who has the land and another who lives near the water (lakes and rivers). If you have the land and you know how to use it properly you can make good profit from it. People with land can do organic farming and agriculture to increase green spaces. Give me trees ultimate aim is to increase the leaf count in the environment by any means whether you plant a Peepal trees in the forest or you plant a money plant in your house it will contribute into the environment.

Pipal Baba is running “Hariyali Kranti” campaign for increasing the leaf count in the country. In this campaign give me trees celebrate the birthday of any personality as a greenary days. Number of planted trees on birthday will be number of birthday e. g 15 october of last month Nakvi ji’s birthday celebrated as Greenary Day under greenary revolution 63 trees planted on Naqvi ji’s 63rd birthday in Jaunapur of Delhi. Strategist Badri is designing the strategies to spread this Hariyali campaign across the nation.