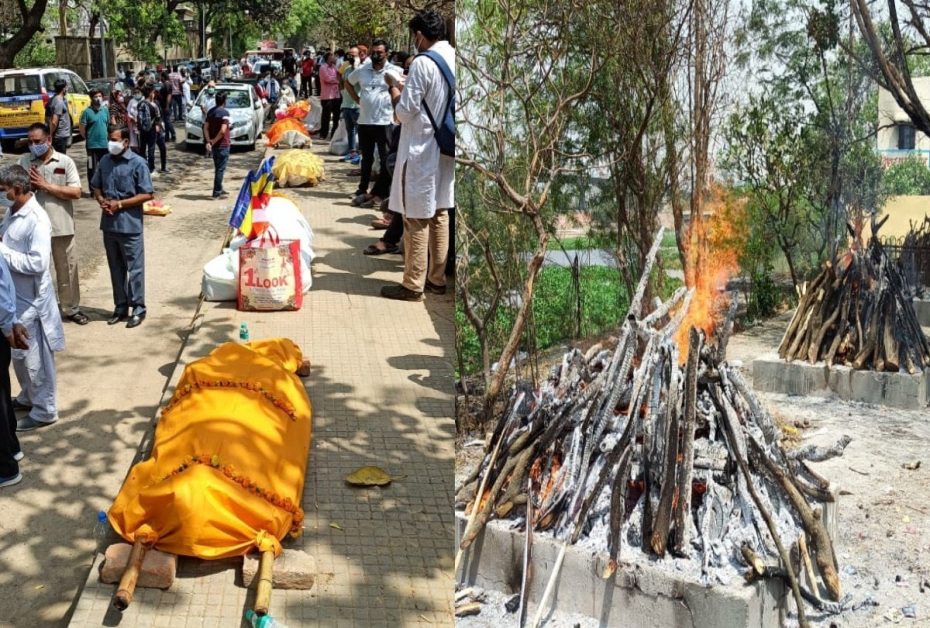 The Hindon crematorium of Ghaziabad has also become full due to corona infection and general deaths between the chaos of Covid-19 in the country and Uttar Pradesh.

People coming here have to wait for hours to cremate the dead bodies of their families. The situation has become so bad that on Friday, the bodies planted here for the funeral were seen on the roadside pavement waiting for their turn.

Along with this, 14 ambulances stand outside the crematorium ghat carrying the bodies of covid infected patients.

Similar scenes were also seen on Thursday, when people had to wait for the turn for a funeral for hours, keeping the economist away from the platform. The condition of the relatives, who were refused funeral after three o’clock, worsened further.

At the same time, cremation ghat management is also disturbed due to the overcrowding of dead bodies today.

The families of the deceased are being asked to give the number and wait for the shed. All the sheds were full before dusk on Thursday. After this, the remaining dead bodies had to be returned.

The Director of Electrical Crematorium Development said that it takes at least two hours for the work of a corpse. He said that due to having a single shed, the family has to wait for their turn.

The timing of the night curfew implemented for the prevention of corona infection in Ghaziabad has been changed. Now the night curfew will be in force from eight o’clock in the evening to seven in the morning.

The night curfew was declared from ten o’clock in the morning to six o’clock in the last week, this arrangement was continued. The police were active in the markets and were directing the shopkeepers to close the shops.

Trade union officials were also constantly calling on shopkeepers to close all their establishments before ten o’clock. Now with the sudden increase in the curfew time has also been extended.

On the orders of the government, District Magistrate Ajay Shankar Pandey has extended the time of night curfew in the district from 8 am to 7 am. Instructions have been given to implement this order with immediate effect.

Instructions have also been given to take strict action against those who do not follow the rules of night curfew. With the increase of time, the people who were kept free from this ban in the past, that system will continue to apply.

The municipal corporation has also been instructed to do sanitation with cleanliness.