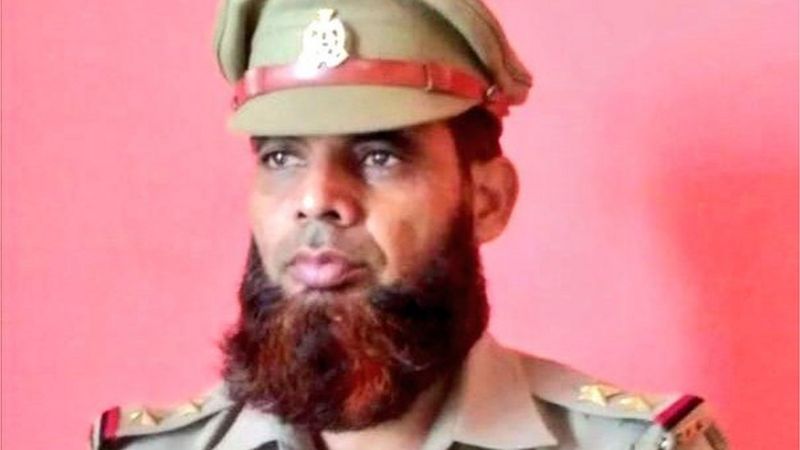 In Uttar Pradesh’s Baghpat, a sub-inspector found it expensive to grow a beard. UP Police suspended Sub-Inspector Intasar Ali and sent him to the police line without permission to grow a beard

Baghpat Superintendent of Police Abhishek Singh said that according to the police manual, only Sikhs are allowed to shave, while other policemen have to be clean shaven.

He said, “If anyone even goes to court against this action, we are ready for it.”

However Sub-Inspector Intesar Ali says that he had asked for permission to shave in November last year, which was not found. He said that if needed, he will also go to court.

The SP said that if a policeman wants to shave, he has to get permission for this. Intasar Ali was repeatedly asked to get permission in this regard but he did not comply. He shaved without permission. It is known that Ali had joined UP Police as a Sub Inspector.

Abhishek Singh dismisses all such allegations, saying, “UP Police is a disciplined force, I have a responsibility to follow discipline as Commanding Officer of Police Force in Baghpat district, notice to Sub-Inspector to shave Was given. He ignored the notice, after which this action has been taken. “

While commenting on social media, many people have raised the question that Intesar Ali has been targeted for being a Muslim. The Indian American Muslim Council has also tweeted on this subject.

Himanshu Valmiki associated with Bhima Army tweeted, “Temples are built in every police station of Uttar Pradesh, why not mosques, churches, gurudwaras. India runs by Constitution, not by Manusmriti?”

Journalist Rohini Singh has tweeted in which a police officer is sitting on his knees with folded hands in front of UP Chief Minister Yogi Adityanath.

Former IPS officer Vibhuti Narayan Rai says, “The suspension of an inspector is being forcefully communalised. It is directly a matter of police discipline.”

Rai says, “When I became an IPS, I was punished for not shaving two or three times. My trainer made me run over the rifle head. Police is a disciplined force, the Superintendent of Police has taken the right action. “

Rai said, “When I was the Superintendent of Police, there used to be dozens of applications annually that were requested to keep a beard. Permission is given for a period of time. I used to give permission only in full vexation.

“On the debate on this matter regarding communalism, the opinion says, “Every policeman who comes in the police job knows that he has to shave daily. This episode is being forcefully religiously colored and by doing so people will be Who are trying to divide the society on the basis of religion. “