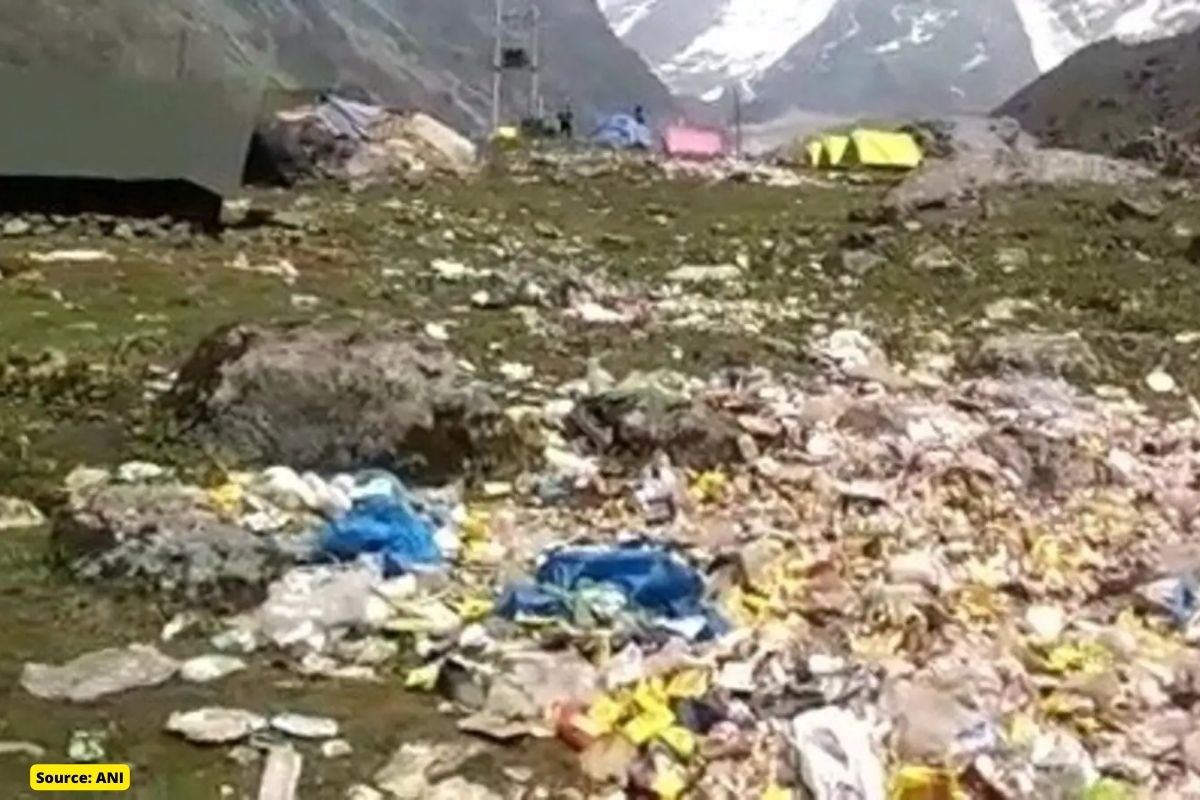 Lakhs of people arrive in Kedarnath Uttarakhand on the Char Dham Yatra, experts have warned of a serious environmental threat amid the threat to the state’s exotic herbs facing extinction.

Plastic waste is spreading everywhere around Kedarnath. All this rubbish had come with tourists, devotees and now it has stayed here. Experts have warned that doing so is not only harmful to the environment but can also lead to more serious disasters like the Kedarnath disaster in 2013.

ANI tweeted a photo of many tents spread out over vast expanses of land with majestic snow-capped mountains in the background. However, the area is completely littered with discarded plastic objects such as bags and bottles, as well as other waste materials, giving it the appearance of one large landfill.

Director of the Himalayan Higher Plants Research Institute (HAPREC), Professor MC Nautiyal, who has researched climate change and herbs from the high Himalayan regions, said: “Over the past few days, Kedarnath is witnessing an increase in At the same time, the garbage heap in the Kedarnath area is destroying the valuable herbs here.

Among the featured herbs, several of them have become extinct here including Jatamasi, Atish, Barmala, Kakoli and other herbs. This is all due to severe climate change coupled with increased human activities in the region. “This has affected the natural vegetation. Medicinal plants are also dying out,” he said.

Another expert, Professor MS Negi, Head of the Department of Geography at Central Garhwal University, said: “We are witnessing record devotees in the state these days due to Uttarakhand Char Dham Yatra.

Most of the devotees are coming to Kedarnath. Businessmen and the government earn a good income due to the large number of pilgrims coming to Kedarnath Dham. But at the same time, the ever-increasing human activity in Kedarnath has become a huge threat to the environment.” “The way plastic garbage has accumulated in a sensitive place like Kedarnath is dangerous to our ecology. It will lead to erosion which can cause landslides. We must take into account the tragedy of 2013 and be careful,” Negi said.

Uttarakhand is a mountainous state; mountainous terrain comprises about 90 per cent of its aggregate geographic region. The state has earned its place among the top five states in reverence for natural hazards. It has an exceptionally fragile landscape that by its origin is susceptible to natural calamities.

The State is predisposed to earthquakes, landslides, flash floods, downpours, avalanches, as well as droughts. According to state records, there have been 20 mudslides in the state during the 11 years from 2001 to 2012, and seven downpour incidents between 2002 and 2010.

More than a few lakhs are at risk of exposure to the increasing frequency and intensity of natural hazards; this is due to several factors, including climate change and environmental degradation. Uttarakhand’s unique geography and topography make it particularly vulnerable to climate-induced natural disasters.

Arguably the worst consequences on infrastructure and population in the last 100 years were witnessed during the 2013 floods in the Mandakini, Alaknanda and Bhagirathi valleys, which claimed around 6,000 lives and thousands were missing.

A seminar was held last year at the Dehradun-based Wildlife Institute of India (WII), which was also attended by the Prime Minister’s Chief Scientific Adviser (PSA), K Vijay Raghavan explained how affecting the fragile ecology of Kedarnath disturbed.

In a presentation, MPS Bisht, director of the Uttarakhand Space Applications Center (USAC), an autonomous organization of the state department of science and technology that works in partnership with the Indian Space Research Organization (ISRO), said: “A just 50 meters behind the Kedarnath temple, a shaft 100 meters wide and 50 feet deep has been dug to build the ‘samadhi sthal’. This well may become extremely dangerous in the future.” The well, if left uncovered, will fill with snow each winter. In 2019 there were 48 feet of snow.

Bisht said: “We already have huge glaciers in that topography, and on top of that, we’re digging a huge hole. This is bound to disturb the fragile ecology of the region. We have been seeing an increase in seismic activity and earthquakes. Why are we creating a situation for another disaster like the 2013 tragedy to happen again?”

Other scientists at the conference agreed. “Kedar means ‘marshy land,’ and digging a 50-foot-deep hole here will only bring trouble considering there are nearby glaciers like Chorabari (whose burst triggered the 2013 disaster),” said a scientist at the Wadia Institute of Himalayan Geology (WIHG) at Dehradun.