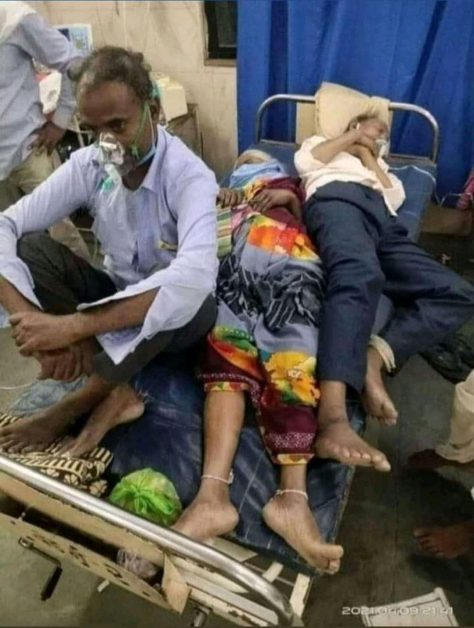 A resident named Niranjan Pal Singh (58), died on Friday 16 April, in an ambulance while being taken from one hospital to another.

They have been turned away by four hospitals for lack of beds.

“It was a heartbreaking day for me,” said Niranjan’s son, Kanwal Jeet Singh, quoted by the BBC.

“I believe that if he receives treatment in a timely manner, he will be alive. But no one helps us, the police, the health authorities or the government,” he continued.

Thousands of new infections are reported every day putting the state’s health infrastructure in the spotlight.

Among the infected patients were Chief Minister Yogi Adityanath, several of his cabinet ministers, dozens of government officials, hundreds of doctors, nurses and other health workers.

Videos shared by local journalists in Kanpur show a sick man lying on the ground in the parking lot of the state-run Lala Lajpat Rai hospital.

At the same location, an old man sits on a hospital bench. Both have tested positive for Covid-19, but the hospital does not have a bed to accommodate them.

Outside the government-run Kanshiram hospital, a young woman wept when she said that two hospitals refused to admit her sick mother.

“They say they’ve run out of beds. If you don’t have a bed, put him on the floor, but at least give him treatment. There are many patients like my mother,” said the woman.

“The Chief Minister said there were enough beds, please show them where they were. Please treat my mother,” She continued.

The situation in the capital of Uttar Pradesh, Lucknow, is equally dire.

A patient named Sushil Kumar Srivastava can be seen sitting in his car with an oxygen cylinder while his desperate family carried him from one hospital to another.

By the time they found a bed for him, it was too late.

“My wife and I are both positive for the corona virus . Since yesterday morning, I have called the government assistance telephone number at least 50 times, but no one has come to deliver medicine or take us to the hospital,” he wrote.

“Due to administrative inaction, my wife died this morning,” he said.

Stories of deaths and families destroyed due to Covid-19 are widely spread as cases of infection continue to increase.

Opposition activists and politicians accuse the state of keeping its cases and death toll low by not doing much testing.

However media also questioned government data due to discrepancies between the official numbers of deaths and bodies at crematoriums in Lucknow and Varanasi.

Officials said the situation is still under control, but crowds at Corona Diagnosis Centers in major cities such as the state capital Lucknow, Varanasi, Kanpur and Allahabad have seen an increase in the number of patients returning from hospitals and 24-hour burning of corpses.