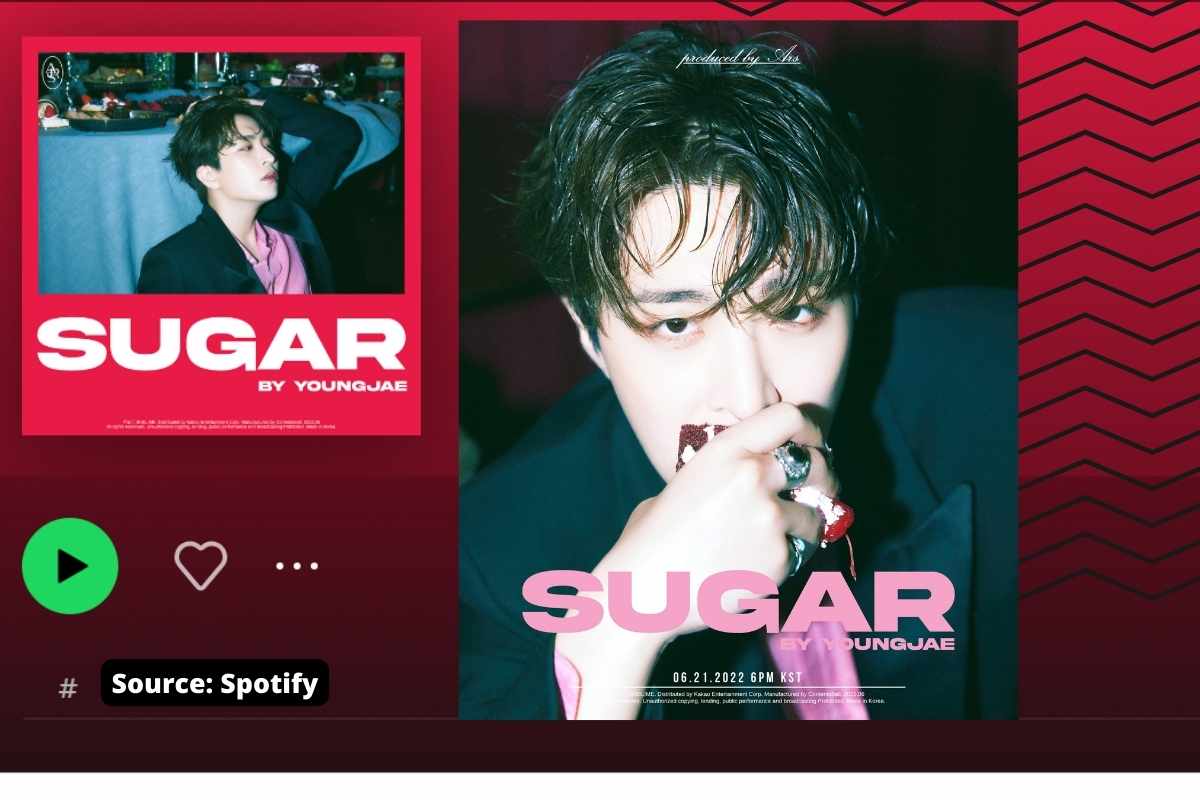 ARS ‘SUGAR’ is here with all Glamourous Party Vibes.

Got 7’s Youngjae officially debuted as a solo artist in 2021 with his first album ‘Colors’ and got all of us Vibin’. The South Korean singer released the album on 5 October 2021. Colors is self-composed by ARS (Youngjae). The album with the title track ‘Vibin’ along with other b-sides depicted a new spectrum of colors and also set his personal records.

Ever since the artist dropped the Schedule teaser for the album, the fans have gone crazy. As they couldn’t help but cry and admire his dedication to his work. Youngjae is a multitalented person, whether its about belting amazingly high notes or his honey voice to acting and endorsing numerous brands along with being on the magazine covers. The artist is well known for his packed-up schedules. Not only this, he also hosts radio shows as well as successfully conducted his solo fan meeting as well.

In the music video for his track “Sugar”, Youngjae takes on a concept revolving around F. Scott Fitzgerald’s story “The Great Gatsby”. He throws parties in order to meet a girl again—but not before admitting that he doesn’t want to let her go. Sugar dropped alongside an extravagant music video for the mini album’s title track, which tells the story of a glamorous party gone wild.

His second solo mini-album “Sugar” is titled after this song and features other tracks about love as sweet as honey. Sweeter than it could ever be, the sophomore album features a plethora of sounds and stories. Youngjae participated in the writing, composing, and arranging process.

“Sugar is truly a beautiful masterpiece 💚 every single track is beyond my imagination his vocals are a bliss, being vocal king he nailed the writing, composition, and making of the album. I want to specially talk about the rap part in sugar “he slew it so perfectly like a pro rapper” being the main vocalist rapping so well as a pro rapper this is what real talent is I’m so proud of youngjae, my eternal sunshine. talking about my favorite tracks I love every single track but my fav tracks are nothing, crema and sugar. he didn’t just only make me happy with the album he comforted my soul. I’m so grateful and thankful to him. Ahgases true sunshine is back with a beautiful masterpiece 🌻💚✨”  Jahanvi, further went ahead saying how the album is like comfort to her and she could listen to youngjae’s voice all the time. She is extremely happy that the artist is getting the recognition he deserves after leaving his previous company JYP Entertainment and how his current company Sublime Entertainment is looking after the artist and promoting him well.

Meanwhile, Anisha, another fan expressed “Sugar is really a chilling vibe song…so charming…The music video is aesthetically pleasing and the green chess piece, I’m so attached to that concept..the way he refers to Aghases (the fans) in every possible way. That rap was new but lit. it’s somehow a new side of Youngjae… So sweet like sugar😉.. I felt a loop, the music video somehow starts and ends at the same place”.

Youngjae never fails to show how talented a person he is. The artist went all out for his recent production, whether it be his overwhelming voice or his high notes, everything aligns well with the concept and the genre he chose. What is more amazing about this title track is the rap he did. Not even a single person expected him to ‘Rap’ but he exceeded our expectations in every facet.

Youngjae has released various soundtracks for multiple K-Dramas, namely, Day by Day for his own web drama ‘Love & Wish’,  You & I for My Roommate is a Gumiho, Goodbye Days, Fall in love, and many more.

As the story behind Youngjae’s composer name i.e, ARS is derived from a Latin quote ‘Ars Longa Vita Brevis’ which means ‘Art is long, Life is Short’. Just like that Youngjae’s songs are those art pieces which are going to stay forever. His thoughts are beautifully embedded in his self-composed songs.

As we know, Youngjae loves his fans unconditionally. So to commemorate his second album, The Global Star is currently gearing up for his upcoming Solo Fansign event in Manila, the Philippines in July. Previously, he held his Fanmeeting in Bangkok, Thailand in March 2022 as well.

We congratulate Ars on the release of his second album ‘SUGAR’.  Have you listened to SUGAR by Ars? Do let us know in the comments section below. We would love to hear your reviews.