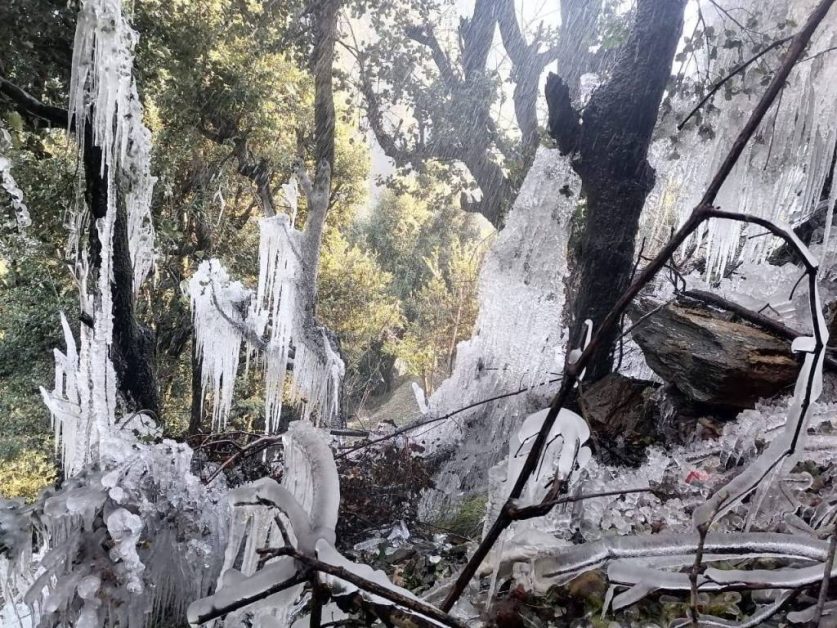 The cold weather conditions on Thursday increased the winter havoc in the Kashmir Valley with mercury settling at minus 8.4°C in Srinagar, the lowest temperature of the season so far and the coldest January night in the past 25 years.

Meanwhile, there was a narrow escape of an aircraft on the Srinagar airport highway after hitting the snow dunes.

ALSO READ: 5 Most Dangerous Roads In Jammu and Kashmir, Ladakh

An official said flight 6E-2559 of IndiGo was halted and the passengers evacuated “after getting into a taxi position for a taxi” to exit an ice mound in the bay just before take-off I went. There were 233 passengers on the flight to Delhi.

Director of Srinagar Airport Santosh Dhoke said, “The engine had come close to the accumulated snow and the ground staff immediately halted the aircraft.”

ALSO READ: Famous celebrities from Kashmir who’ve made it to Bollywood

Many villages cut off from district headquarters.

The cold sub-zero conditions in the valley triggered a cold wave, resulting in the slowing of snow clearance. Many villages in South, Central and North Kashmir are cut off from the district headquarters.

“It is the 10th day of snowfall and roads are closed on the outskirts of Kulgam. Patients are finding it difficult to reach hospitals. Even families reporting the death are struggling to perform the last rites, ”said local Ghani Dar of Kulgam.

Most taps, water bodies that freeze as Dal Lake, Srinagar, recorded a minimum temperature of minus 8.4 degrees Celsius, the lowest since 1995.

Freezing temperatures also slowed traffic speeds as most of the stretches slipped.

The Qazigund area of ​​South Kashmir, the main gateway to the Kashmir Valley, was recorded at minus 9.3 degrees Celsius.

Lieutenant Governor Manoj Sinha visited the capital Srinagar and reviewed the measures taken for snow clearance from Kashmir and restoration of essential supplies.

“Field-level officials must ensure rapid completion of snow-draining and dewings of all lanes and suburbs. In areas where public services are still disrupted, ensure round-the-clock operations for early restoration. Sinha said that it is necessary to ensure uninterrupted supply of essential and health facilities in the valley.

Hundreds of passengers were stranded after the closure of the Srinagar-Jammu highway after a bridge was damaged in the Banana Morh area of ​​Ramban on Sunday.

“It will take 10 days to make it safe for driving. An official said the Bailey bridge is being constructed to allow trucks to be carried to reach the valley.

Meanwhile, an official said that a teenage girl critically injured was airlifted from the cut-off Tulle near the Line of Control in Bandipura and rushed to the hospital.

4-year-old Tuiba Manzoor required immediate medical attention. An official said that a special retrenchment was arranged to transfer him to a hospital in Bandipora.

Winter in Jammu and Kashmir is divided into three periods. ‘Chilla-e-kalan’ or big winter consists of 40 days, then 20 days ‘Chilla Khurd’ and finally ten days ‘Chilla Bacha’ or short winter. The freezing cold for the first 40 days keeps people indoors. In the next 20 days, the snow begins to melt and in the last ten days, along with the rains, the arrival of spring is predicted.

The literal meaning of ‘Chilla-e-kalan’ is ‘forty big’ and it refers to the 40 days of severe cold after December 21 during which the blood-curdling cold falls in Kashmir. These 40 days of severe cold start on December 21 according to the solar date and 9 Poh according to the Bikram date. These days it is so cold in Kashmir that it has the power to collect blood in the body of an animal and go down to the bones.