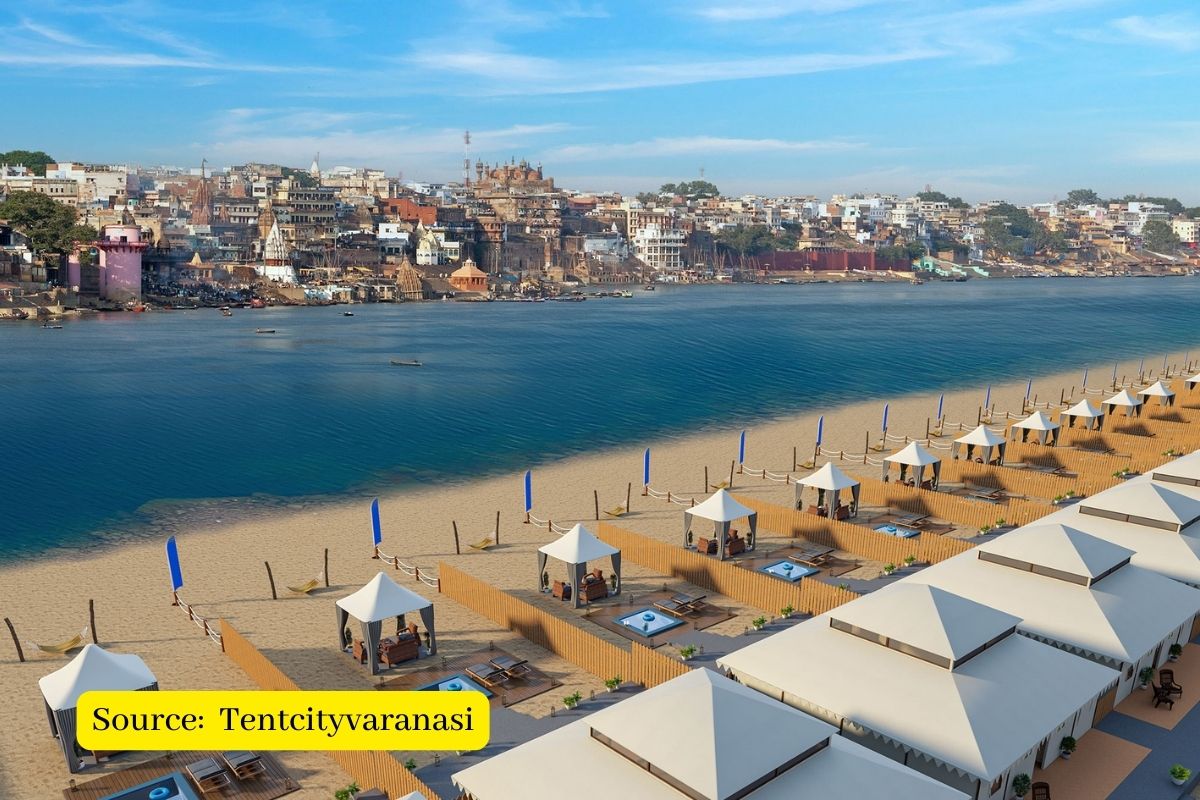 Tent City, developed by the Varanasi Development Authority as a public-private partnership on the banks of the Ganges, aims to increase tourism opportunities in the region. It will provide accommodation for tourists along with live classical music and yoga sessions, among others.

The tent city of Kashi is equipped with Swiss lodges, broadly of three categories: Ganga Darshan Villas, premium tents and super-luxury tents. Living in a tent, for whatever reason, will be challenging. And that challenge is a great reason to give it a try. There is something very rewarding that comes from being able to live and thrive in a tent.

Why is Govt building tent city?

The Uttar Pradesh government is building this beautiful tent city to boost tourism and intends to give tourists a new feeling of staying in Kashi. The tent city will resemble the sand dunes in Jaisalmer and Rann of Kutch in Gujarat.

The tent city would add a new chapter to the eastern UP tourism industry and bring financial benefits to the local people. The tent city on the banks of the Ganges River will be a new chapter in the confluence of religion, spirituality and culture.

Tent City has been conceptualized on the banks of the Ganges River to harness the region’s tourism potential. The project has been developed in front of the ghats of the city which will provide accommodation facilities and cater to the increasing influx of tourists in Varanasi, especially since the inauguration of Kashi Vishwanath Dham.

Tourists will arrive at the Tent City by boats from different Ghats located nearby. The tent city will be operational from October to June each year and will be dismantled for three months due to the rise of the river water level in the rainy season.

Tourism is the main focus of the Gujarat government and developments are planned accordingly to make the place comfortable yet attractive for tourists. So, when the gates of the Sardar Sarovar dam were opened, hundreds of people started coming to the site, and that is the reason why the government decided to build a tent city for the accommodation of the people.

Also Read:  Varanasi tent city inauguration, what is the controversy around it?

Deepak Agrawal, Division Commissioner and VDA Chairman. said “the ‘Tent City’ will allow its guests to enjoy the beauty of the mythological Kashi ghats both day and night. While it aims to reduce the burden on hotels, which opt for dynamic pricing due to the increased number of pilgrims after the redevelopment of Kashi Vishwanath Dham opened in December, it will also be an attraction for locals by giving them a chance to get acquainted with Rann Utsav of Kutch and Konark Tent City”.

Why tent cities are better option

The weather is always favourable and refreshing in Tent City. The tent city is primarily designed for the purpose of maintaining the environment by minimizing air and noise pollution. They are in charge of taking care that there is no contamination of the water that could disfigure the natural landscape, maintaining the ecological balance.

Amidst the beauty of nature, the tent city provides tourists with an unforgettable experience. This means trying to reduce your impact on the environment around you, which is especially important now that so many people have come to discover the beauty of outdoor adventure.

Tent cities are used to describe camping that respects the environment. This includes everything from where you’re going to camp, how you get there, what equipment you’ve purchased, and what you do once you’re there. You may also have heard of “zero waste camping” or “sustainable camping”.