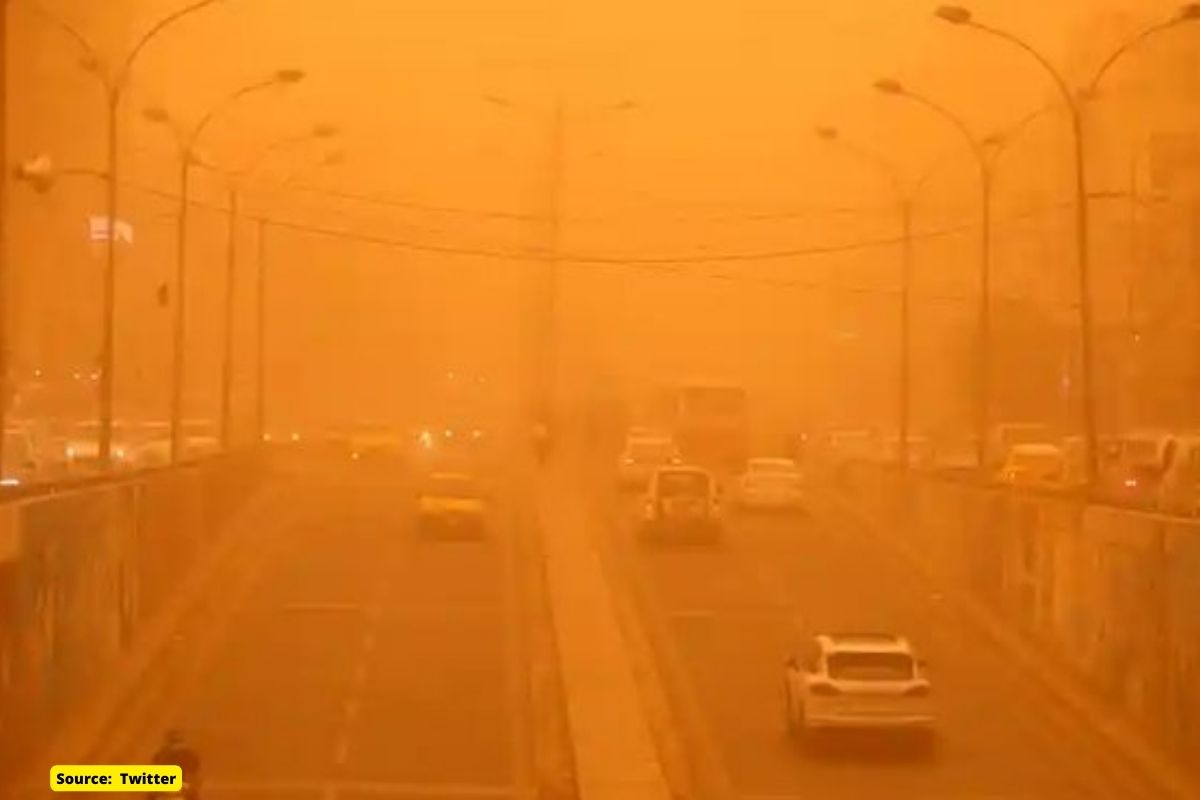 Sand storms have hit parts of the Middle East, including Iraq, Syria and Iran. Due to this, public places and airports have had to be temporarily closed in many places. It was the latest in a series of sandstorms to hit the Gulf, following similar storms in Saudi Arabia and the United Arab Emirates. For the second time this month, Kuwait International Airport suspended all flights due to Monday’s sandstorm, as the huge plume of dust reduced visibility to almost zero across the country.

According to the news website Al-Arabiya, this was the second time that Kuwait International Airport suspended all flights on Monday due to the sand storm because it was very difficult to see anything properly in the sand storm. Not only the air flights but also the Kuwait Football Association had to announce the postponement of the final match of the Amir Cup due to bad weather.

According to Iraq’s health ministry, more than a thousand people have been hospitalized due to respiratory problems. Such sand storms come late in the spring season, but this time such sand storms are being seen from the month of March. The sand storm that came on Monday was new in itself. Oxygen has also been arranged in the inaccessible places of Iraq to breathe during the sand storm.

The medical department in Syria was put on alert as a sand storm hit the eastern province of Deir al-Jour, which borders Iraq. According to the website, at the beginning of this May, three people were killed in this type of storm in this area.

Bashar Shoaib, the head of the Syrian health ministry’s office, said an ambulance was put on standby. More than 850 oxygen tanks and essential medicines have been arranged to deal with asthma patients in the hospitals.

People posted many pictures on Twitter regarding the sand storm. One user wrote, “First time I see this sand storm looks orange”. A user from Kuwait wrote that there is an attempt to reach home safely in this storm. Looking at the picture he posted, it can be guessed how big the sandstorm was.

In the United Arab Emirates, experts have warned of health problems due to dust storms sweeping large parts of the country this week. Doctors say that as the winds blow dust and sand into the atmosphere, it not only reduces visibility but also makes it difficult for people to breathe.

It is haze, a meteorological phenomenon that occurs in the atmosphere and is also characterized by the presence of very small particles of dust, ash, clay or sand in suspension, according to various specialized sites on the subject.

Although these particles are very small, they are numerous enough to give the air an opaque appearance and this is what causes the atmosphere to acquire that orange hue that is reflected in the sky.

Many people wonder if it is safe to go out, in reality as in any situation where the air is polluted there are some risks, even more so for people who are vulnerable to this such as asthmatics or allergies, but in reality, the impact of the images is much greater than the phenomenon itself for people who are healthy, what is real is that due to the denser particles, the air is less light.