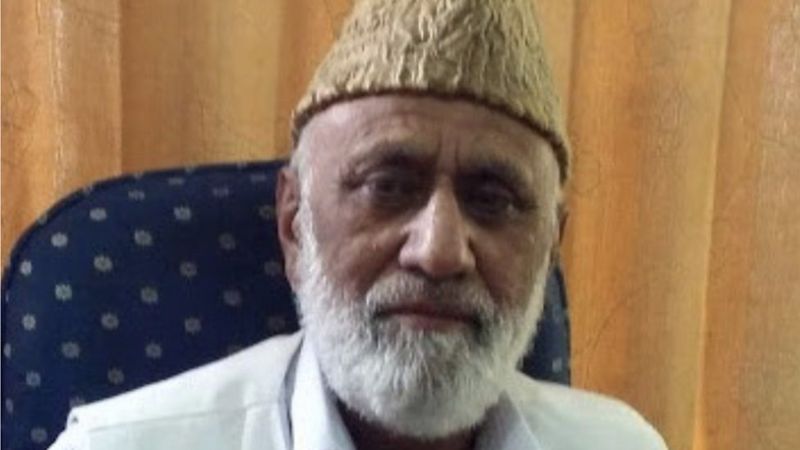 Who was Ashraf Sahrai: Separatist leader Muhammad Ashraf Khan Sahrai, who had been lodged in Jammu and Kashmir’s Kot Bhalwal Jail for a year, was infected with the COVID-19 virus last week, after which he was rushed to Jammu Medical College Hospital where he died on Tuesday afternoon.

Junaid Sahrai, the 77-year-old son of Sahrai, dropped out of economics to join the armed group Hizb-ul-Mujahideen, and Junaid was killed in a clash last year.

Sahrai has been associated with the Jamaat-e-Islami for almost half a century and was a close associate of the party’s most popular leader, Syed Ali Shah Geelani. His death has raised concerns about the safety of Kashmiri prisoners.

After 9/11, when the then military ruler of Pakistan, General (retd) Pervez Musharraf, showed flexibility in Pakistan’s traditional position on Kashmir, the separatists’ alliance, the Hurriyat Conference, split into two ideological tents.

The moderate tent was led by Mirwaiz Umar Farooq, while Syed Ali Gilani, who opposed Musharraf’s Kashmir formula, took charge of the tent.

Geelani, along with Ashraf Sahrai, formed his own party, the Hurriyat Kashmir Movement. Sahrai was still the head of the Hurriyat movement.

Sajjad Ghani Lone, son of former Hurriyat leader Abdul Ghani Lone and head of the People’s Conference, has termed the death in Sahrai captivity as “an irony of Kashmiri politics”.

He wrote in one tweet after another, “A long political career has come to an end. He was an ideologue of Jamaat-e-Islami. When I was 19, I suddenly encountered them. He told me to tell my father (Abdul Ghani Lone) how sweet your lips are, don’t be disgusted by abuses.

Sajjad Lone, who is now active in pro-India politics, added, “It is ironic in Kashmiri politics that high-ranking politicians are victims of controversy.” A very honest politician has been in jail for decades.

“Deeply Saddened to know about Ashraf Sehrai sahab’s sudden demise. Like him countless political prisoners & other detainees from J&K continue to be jailed purely for their ideologies & thought process. In today’s India one pays a price with his life for dissent, ” She tweeted.

She urged government of India to release all detainees on parole
“The least GOI can do in such dangerous circumstances is to immediately release these detainees on parole so that they return home to their families, “she tweeted later.

Sehrai was born in 1944 in Tekipora village of Lolab area of north Kashmir’s Kupwara district, completed his primary education in his hometown Tekipora and secondary education from Sogam Lolab High School in 1959.

Sehrai did his Bachelor of Arts (Hons) in Urdu from Aligarh Muslim University in Uttar Pradesh. He was fond of writing and his writings as well as poems were mostly published in different media outlets including ‘Tulu’, which he started publishing in 1969 from Sopore area of Baramulla district. The magazine being published by him was shut down in 1971.

Sehrai became an affiliate of Syed Ali Shah Geelani in 1959 and became his close aide and friend.

He became the member of Jamaat-e-Islami in 1960 and was incarcerated for the first time in the year 1965 over anti-government activities after he delivered a speech criticizing Ghulam Mohammed Sadiq’s government for repression of free speech and arrest of members of the Moh-e-Muqaddas Majlis-e-Amal.

After leaving Jamaat-e-Islami, Sehrai was appointed as Tehreek-e-Hurriyat’s General Secretary in the year 2004 during its foundation.

Later on March 19, 2018, he was appointed the acting chairman of Tehreek-e-Hurriyat after Geelani stepped down.

Sehrai was elected as Chairman Tehreek-e-Hurriyat for three years on 19 August by a margin of 410 votes out of a total of 433.

Sehrai had six children –four sons and two daughters. The youngest son of Sehrai, Junaid Sehrai joined militant ranks in March 2018 and was killed on May 19, 2020 in an encounter by the government forces in Srinagar.

With inputs from agency