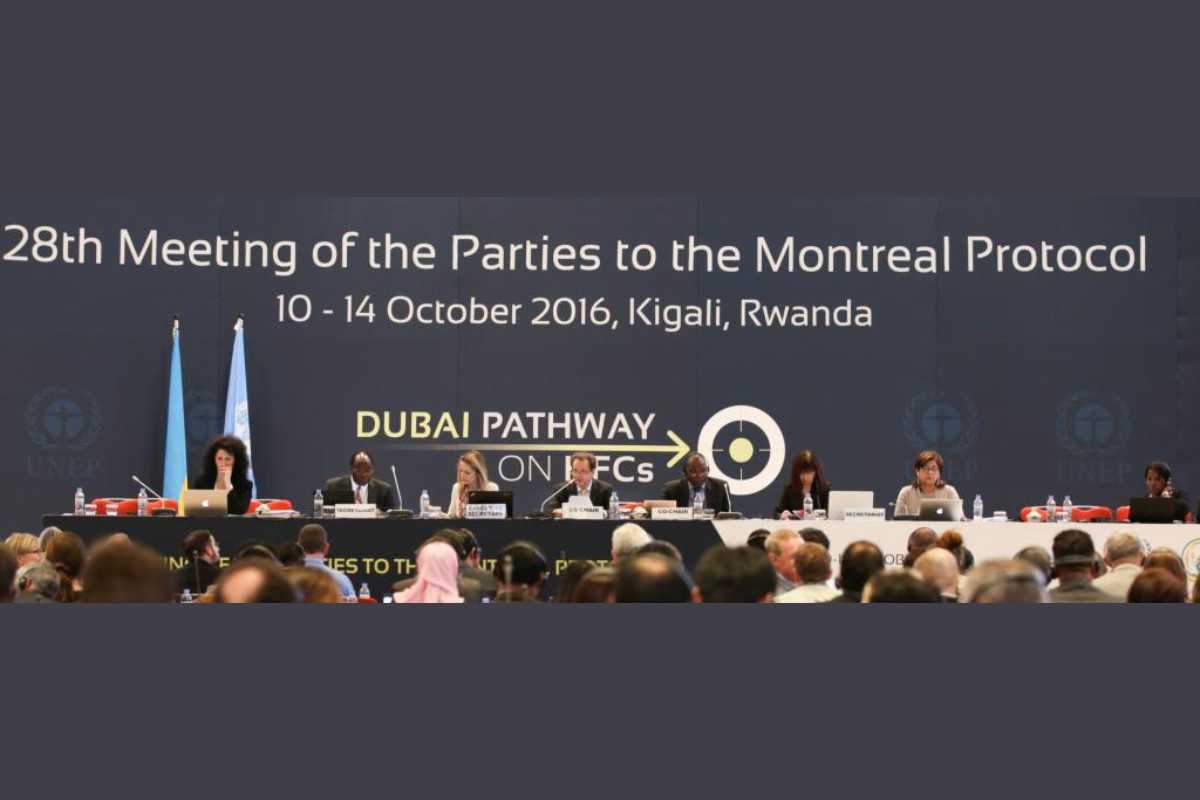 The Montreal Protocol of 1989, an international treaty to protect the ozone layer by phasing out Chlorofluorocarbons (CFCs), has undergone several amendments. One such amendment was the Kigali Agreement. This agreement is the 8th in the series of amendments. The amendment was signed during the 28th Meeting of Parties in October 2016 in Kigali, Rwanda. Hence, the name.

This agreement entered into force on 1st January 2019 after being ratified by the signatory countries.

HFCs have been suggested as the replacement for CFCs and HCFCs (hydrochlorofluorocarbon). Although, they emit large amounts of greenhouse gases that impact the environment as they cause global warming. In fact, they are 1000 times more potent than methane and CO2 in causing global warming.

The agreement aims to phase out HFCs by reducing manufacture and usage. According to the agreement, the signatory nations are expected to reduce the production and usage of hydrofluorocarbons by 80-85% from their baselines up to 2045.

PROVISIONS OF THE AGREEMENT

• The Kigali Agreement is a legally binding treaty among the signatories with non-compliance measures in place to ensure proper implementation.

• It sets country-specific targets depending on the level of development, socio-economic constraints, etc.

• Focuses on common but differentiated responsibility and respective capabilities.

Read more: The Kigali Amendment to the Montreal Protocol: Another Global Commitment to stop climate change

The signatories have been classified into three groups:

• Developed Nations led by the USA and EU, starting the phase-down of HFCs by 2019.

• Developing economies like China, Brazil, and some African states will start phase-down by 2024.

• Developing Economies like India, Pakistan, Saudi Arabia, and some of the hottest nations shall start to phase down by 2028.

As HFCs are not harmful when it comes to the depleting ozone layer, they had not been in the ambit of the Montreal Protocol. But, through the Kigali Agreement, phasing down HFCs will help control the global temperature. It can be a very crucial step in controlling the temperature increase under 2 degrees Celsius.

Just like the Montreal Protocol has been successful in phasing out almost all of the ODS (Ozone Depleting Substances). And, the Kigali Agreement is the right step in the direction of controlling global warming.