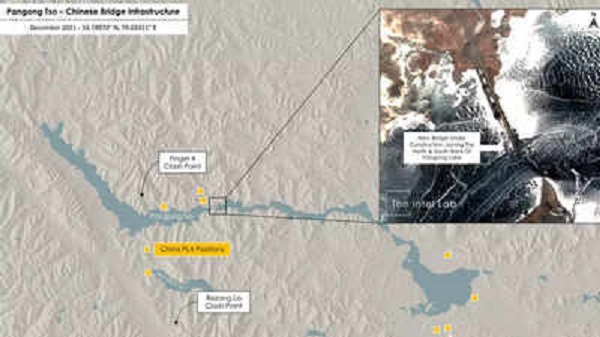 Ground Report | New Delhi: What is China’s new border law; China’s Standing Committee has enacted a new law protecting land borders from January 1. This law came into force at a time when the border dispute between China and India in Ladakh is still unresolved.

What is China’s new border law?

The new border law has 62 articles and seven chapters. China is required by law to set up boundary marks on all of its land borders to clearly designate the border. By the way, the new border rules are not exclusive to India.

The law also states that the state is required to strengthen border defense, support economic and social development, open up border areas and improve public services and infrastructure, encourage and support the lives and work of the people and Steps should be taken to promote coordination between border defense and social and Economic Development.

ALSO READ: Why UP govt. Wasting crores of taxpayer’s money for advertising in Delhi?

At the same time, China has changed its name, claiming more territory in Arunachal Pradesh, and the Chinese embassy in New Delhi has written letters to members of parliament, including an Indian minister, who attended a dinner of Tibetan lawmakers in exile. ran away.

According to the Indian Express, the Standing Committee of the Chinese National People’s Congress has passed new legislation to “protect the country’s land borders and prevent exploitation”.

According to China’s state-run Xinhua News Agency, the government’s position on the issue is that “China’s sovereignty and territorial integrity are sacred and invincible and the state needs to take steps to protect them, and the law empowers the state.” ” It should take steps to strengthen economic and social activities, including defense, in border areas and improve the provision of public services and infrastructure there.

According to an official statement issued on Shenhua, the law urges the state to resolve border issues through dialogue with neighboring countries to resolve land disputes or long-term border disputes.

Why did China introduce the law?

According to the Brookings Institution in Washington, one of the reasons for the law is to protect China’s own land borders, where it faces conflict.

According to him, the law shows that Beijing is also concerned about the stability of its border regions in Central Asia, particularly in Afghanistan, where extremism is at risk of escalation once the Taliban take control of its territory. Might as well fall on Xinjiang.

The country’s politics could also be a major factor, as the law could lead to further popularity of President Xi Jinping and his re-election.

ALSO READ: China is building a bridge over Pangong Lake

What does this law have to do with India?

This law is not for India, but it will definitely have some effect on it. Although this law is not specifically for India, it will have some effect on India as well. There is a disputed border of 3488 km between China and India. The border with Mongolia and Russia is the third-longest among China’s 22457 km long borders with 14 countries. Apart from India, Bhutan (477 km) is the only other country with which China has a disputed land border.

There are growing suspicions that China is stalling further talks on the standoff in eastern Ladakh to implement the new law. The last meeting of the corps commanders of the two countries was held in October and India was hopeful that China would agree to withdraw from Petrol Point 15 in Hot Springs but it did not do so.

However, no joint statement was issued after the Corps Commanders’ meeting, as has been the case in most of the previous meetings. The awaited date of the Round Table talks also comes with concerns that the Chinese delegation may use the new law to try to strengthen its existing strongholds.

Besides Patrol Point 15, China is obstructing Indian access to conventional patrol points at Patrol Point 10, Patrol Point 11 and 11A, Patrol Point 12 and Patrol Point 13. It has also happened that some ‘so-called civilians’ put up tents in the territory of India along the Line of Actual Control at Damchok and refused to vacate the site.

Another important point could be that the new law prohibits the construction of permanent infrastructure near the border without China’s permission. Since the standoff began, both India and China have been rapidly building new roads, bridges, and other facilities in the region. Actually, China has already objected to Indian workers.