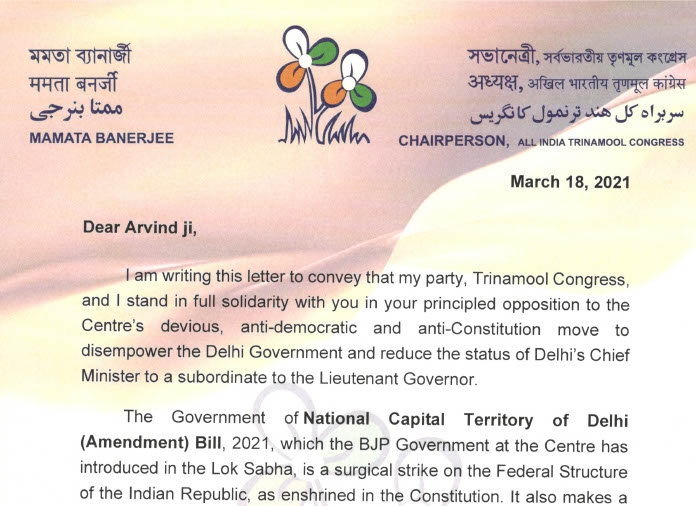 The West Bengal chief minister and Trinamool Congress head Mamata Banerjee has come out in support of her Delhi counterpart Arvind Kejriwal against the center’s bill that aims to give overarching powers to the Lieutenant Governor, saying that the bill is a “surgical strike on the federal structure as enshrined in the constitution.”

In her letter of support, she argues for a united fight by non-BJP political parties to protect the federal structure of the republic and prevent dilution of powers of the state governments.

Kejriwal thanked Banerjee for her support adding that “anyone who supports India and its democracy cannot support this bill.” In his tweet, Kejriwal also said that he will pray for her “handsome victory in the coming elections” of the West Bengal assembly.

Banerjee, in her letter of support, argues that the Government of National Capital Territory of Delhi (Amendment) Bill 2021, which has been introduced by the union government in Lok Sabha, makes a mockery of the letter and spirit of democracy by disempowering the government elected by the people of the national capital and it “violates the unambiguous verdict by a five-judge Supreme Court bench in 2018, which upheld the pre-eminence of Delhi’s elected government in all matters other than police, public order and land.”

“I am writing this letter to convey that my party, Trinamool Congress, and I stand in full solidarity with you in your principled opposition to the Center’s devious, anti-democratic and anti-constitution move to disempower the Delhi government and reduce the status of Delhi chief minister to a subordinate to the Lieutenant Governor,” her letter to Kejriwal reads.

The letter states that Banerjee is not at all surprised by the BJP’s move to strip away the powers of the Delhi government. “It is evident to all that both Prime Minister Narendra Modi and home minister Amit Shah have not been able to stomach the humiliating defeat the BJP suffered at the hands of Aam Admi Party in both 2014 and 2019 assembly elections. They want to govern Delhi by proxy, which is the real purpose of the proposed amendments of the GNCTD Act,” Banerjee writes.

In a separate event in West Bengal, Banerjee said that she respects the post of the Prime Minister but it is unfortunate that the central government  wants LG to be more powerful  than the elected government.

“I condemn this and every democratic citizen will oppose this move. Democratic government should not be weaker than the nominated person,” she remarked.
In her letter, Banerjee states that Delhi’s case is not an exception and she argues for a united fight by non-BJP political parties to protect the federal structure of the country.

“In state after state governed by non-BJP parties, the center has been creating problems for the duly elected government by misusing the office of the governor.

The time has come for a united and effective fight against the BJPs attack on democracy and the constitution especially with regards to its plans to dilute the powers of state government and downgrade them to mere municipalities,” she writes.

She adds that she’ll write to all the non-BJP Chief Ministers in the country, urging them to extend their support to AAP. “I shall also separately write to the leaders of non-BJP political parties on the need to collectively safeguard the federal structure of the Indian republic,” she adds.