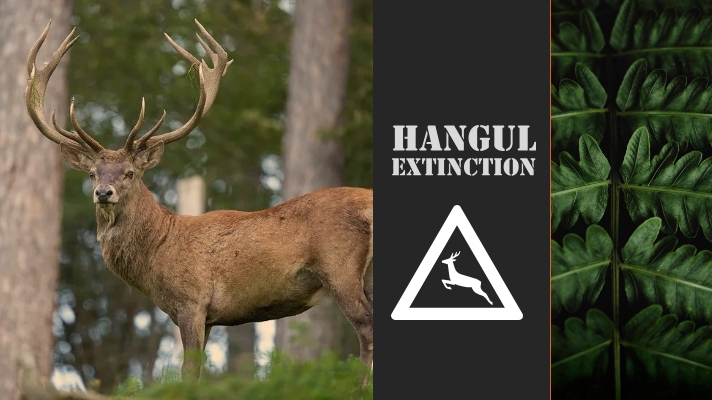 Ground Report | New Delhi: Kashmir’s state animal Hangul; ‘The future of wildlife is in our hands’ was the theme for this year’s World Wildlife Day marked by United Nations every year. In Kashmir, at the Dachigam National Park held a simple gathering where field staff pledged to protect the state animal, Kashmir stag, popularly known as Hangul, that is nearing extinction.

It may be noted that Hangul has been listed as ‘critically endangered’ by International Union for Conservation of Nature. The population of Hangul is restricted to Dachigam National Park in Srinagar. To commemorate the day, summer capital Srinagar also hosted a conference organised by an NGO, Wildlife Conservation Fund, headed by valley-based environmental lawyer Nadim Qadri.

The event was organised at Saif -ud-Din Memorial Conference Hall of S.P. College, Srinagar in Collaboration with ‘Earth Day Network and Sanctuary Asia’, India’s first and only environmental news magazine.

However, Kashmir valley, that is more than a natural wonder, did not witness any major events by wildlife department on the day.

Clarifying why no mass awareness events were organised in the valley to mark the day, tight-lipped officials at Jammu said that the since all top officials were in Jammu, nothing could be planned.

“We were not informed nor do we have any official communication regarding holding any function on this day,” a top official of Wildlife Protection Department wishing not to be named confided.

Referring to government’s attitude as sheer ignorance, former research officer and regional wildlife warden at the
department M Shafi Bacha said that government wasted the day that could have been used for creating awareness.

Hangul placed under schedule-I in the Jammu and Kashmir State Wildlife Protection Act, 1978 and in Indian Wildlife (Protection) Act, 1972, is among the four eastern most distributed subspecies of red deer but presently, the population of Hangul is restricted to Dachigam National Park and adjoining protected areas.

Bacha said that last year he did a census of Hangul population, in and outside the Dachigam National Park, and his finding revealed that there are 110-130 Hanguls inside while as many as 40-50 stags outside the park over the Himalayan mountain range.

Officials at the department claimed that they too have done the census of Hangul but quickly added that ‘report is being scrutinised and will be made public soon’ without providing any clear details.
According to Bacha, in the 1940s, the population was between 3,000 and 5,000 but this number dropped down to 160 in the 2008 census.

In its “Management Plan (2011 – 2016) Dachigam National Park” the department had said the poaching by Gujjars, Bakarwals and other shepherds, who take their livestock to Upper Dachigam during summer, is the main cause for the decline in the population of the state animal.

Adding the plan said that the problem of declining Hangul population is compounded by the ‘large scale biotic interference due to grazing by the State Animal Husbandry Department owned cattle that use Dagwan in Upper Dachigam as a grazing ground.’

The master plan, in possession of iamin, further reads that in the vast areas of Nageberan and Marser, thousands of sheep, goat, horses and cattle are grazed by local graziers, gujjars from Kashmir as well as Bakarwals and Banyaris from Jammu that creates a ‘natural competition for food resources’ for Hangul population.

“The Dachigam Hangul population decreased from 3,000 in 1940s to 200 by 1969 while the number sheep introduced in Dachigam NP in 1961 by the State Animal Husbandry Department increased from 20 to 3,000 during the same period.

The sheep spend the summer in Upper Dachigam and winter in Lower Dachigam. High livestock densities may out-compete native Trans-Himalayan wild ungulates. Empirical studies in the adjoining areas of Spiti, Himachal Pradesh has established that the Bharal gets out competed by livestock. The Deer and sheep have similar preferences in grazing and are hence competitive,” reads the Master plan.

According to Master Plan, the decline in number of hangul has been associated with poaching, increase in predator numbers, grazing of domestic livestock in summer grounds, and zoonotic diseases.