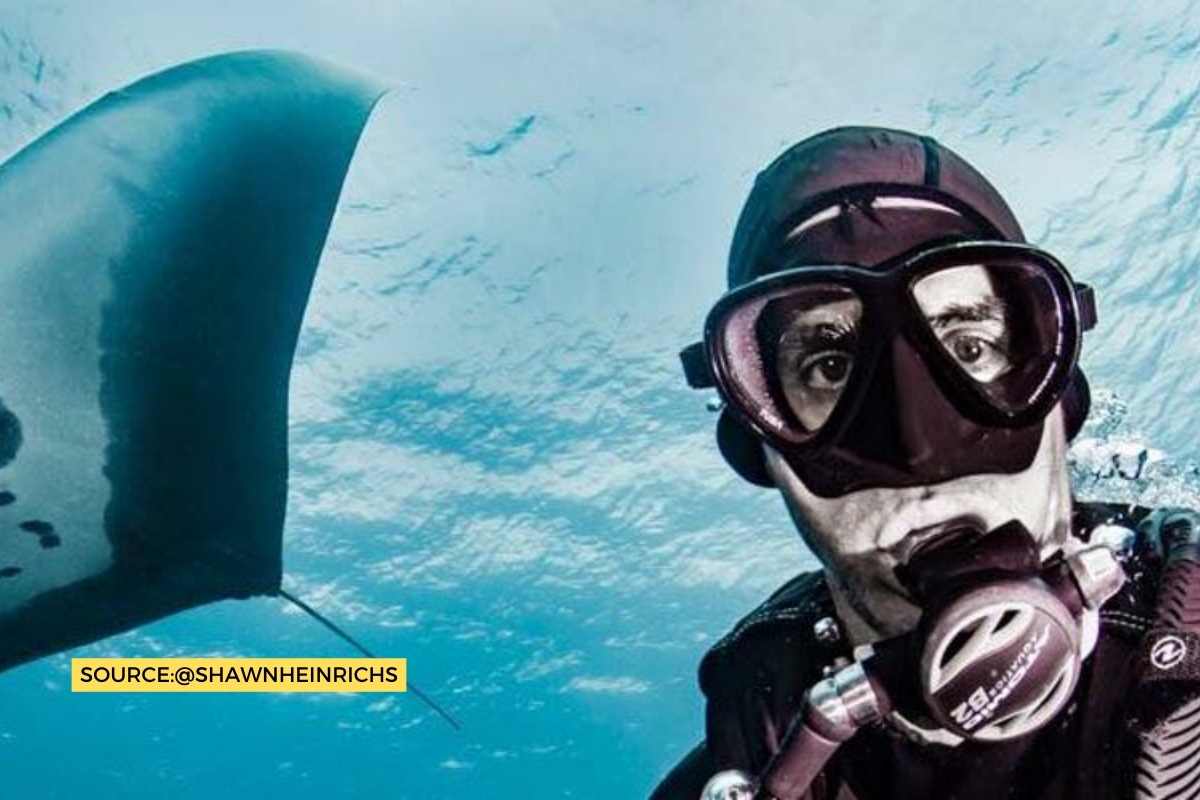 Shawn Heinrichs founded the Blue Sphere Foundation and is an Emmy Award-winning filmmaker, photographer, scuba diver, and marine conservationist. He serves on the International Board of WildAid, is a Director of Manta Trust, a Safina Fellow. Furthermore, he is an International League of Conservation Photographers Fellow.

Shawn is a significant force in the global effort to save threatened marine species and habitats because he is a fervent campaigner. His main conservation priorities are stopping the slaughter of sharks worldwide, preserving manta and Mobula rays, and creating marine protected areas.

Heinrich acknowledges that a large portion of his job entails swimming in spectacular waters to take pictures of whales and manta rays.

Read more: ‘Apathy is one of our biggest problems’: Ocean photographer Shawn Heinrichs wants to save the seas

But, a portion of it entails putting his life in danger by going undercover to the front lines of illegal wildlife trafficking, pollution, and habitat destruction around the world. As a consequence, he has been pursued by mafiosos and received death threats—all in the name of getting the images that inspire people to defend the most endangered species and habitats of the ocean.

His investigative photography has served as the focal point of hundreds of millions of viewers’ access to documentaries, news, editorials, and campaigns.

The Emmy-nominated film Racing Extinction, one of the most popular environmental documentaries of our time, featured Shawn as a key activist and cinematographer. His work was displayed at the Vatican, the United Nations, and the Empire State Building as a part of a global environmental activation campaign.

Read more: This Photographer Risks His Life To Save Our Oceans—And Convince Us To Save It Too

The Convention on International Trade in Endangered Species of Wild Fauna and Flora (CITES) has increased the number of marine species listed as being protected from simply whale sharks and great white sharks to dozens of species as a result of Heinrich’s tireless effort.

Heinrichs worked to expand the Galapagos Islands’ marine protected area to shield it from aggressive commercial fishing. Furthermore, his SeaLegacy colleagues are assisting the Bahamas in putting its plan to protect 30% of its oceans by 2030 into action.

SeaLegacy is an organization that uses art as a tool to stop the destruction of oceans.

Shawna and his colleagues instigated an important movement called Indonesian Ocean Pride that harnesses the voices of Indonesia’s most influential players, from some of the most powerful politicians to some of the greatest celebrities and local activists. Within that movement, they are growing a motivated base of strong powerful voices that span culture, religion, race, and age.

Activists like Shawn who have worked tirelessly towards a goal, have done some extraordinary work historically. Their work has reached a lot of people through publications like National Geographic, BBC, and New York Times. At the same time, it also has an impact on policymakers who ultimately make decisions that can impact the future.