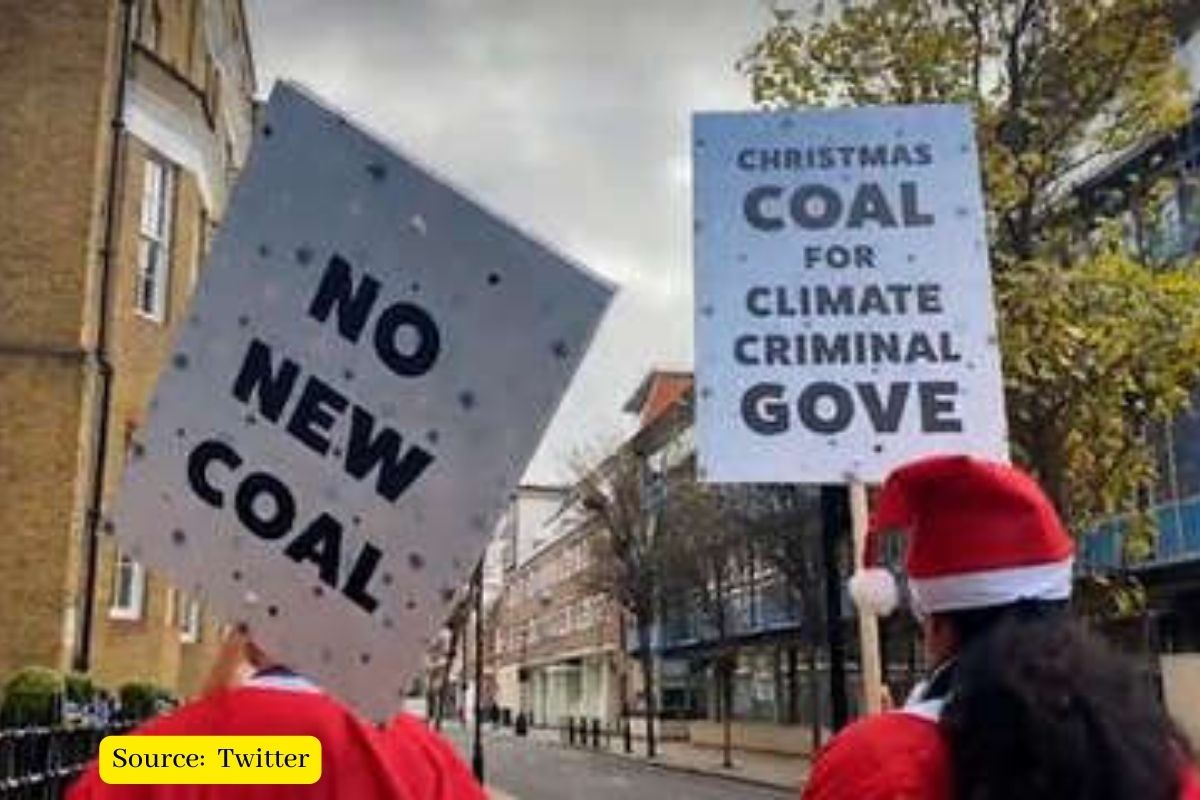 Activists, including one person donning a makeshift Michael Gove mask, delivered coal to the Leveling Up secretary’s office on December 21 in protest against a new mine in Cumbria.

Activists on behalf of Lush and the Coal Action Network dressed up in Santa suits to deliver coal from the “naughty list” for Gove.

Maggie Mason, a key activist with the local Cumbrian SLACC group, says: “I am appalled that Michael Gove has approved a new coal mine in Cumbria. The UK government has failed to keep UK planning law and guidance on coal in line with UK climate targets or the needs of UK industry.”

Daniel Therkelsen, an activist with the grassroots group Coal Action Network says: “We are here because Santa knows who has been bad and good, and Gove tops the list of bad guys for approving the Whitehaven coal mine. If more coal mines really are Gove’s only offer to level up, Santa has a message for him this Christmas: climate change is only levelling out. It’s a dead-end industry that distracts from the levelling potential of future jobs.”

In a joint statement, Coal Action Network say: “We must remember that people are making these decisions that cost us billions, our quality of life and our own future. Where is the individual responsible for that? Families are freezing in their homes this winter because someone in the government effectively stopped the home insulation program about a decade ago”.

The statement reads, “Instead of holding that person accountable and reversing that damage, Gove approves a coal mine for a steel industry that doesn’t want it, derailing our climate promises. Santa is all about individual responsibility and doesn’t care if someone hides behind a ministerial title, so these sacks of ‘coal’ are being delivered personally to Michael Gove this Christmas.”

Gove has approved the UK’s first new coal mine in 30 years, and the government has said demand for coal to produce steel drove the decision, but senior steel industry officials have said the mine has limited potential due to high sulfur levels.

The proposed mine in Cumbria would extract coking coal for steel production in the UK and around the world. Critics say the mine would undermine climate targets and that demand for coking coal is declining.

Earlier this month, activists in Cumbria are planning protests after the government gave the green light for the first new coal mine to be dug in the UK in three decades.

Opponents of the mine are expected to gather in Penrith and at the Whitehaven mine site on Saturday, as local opposition to the plan grows.