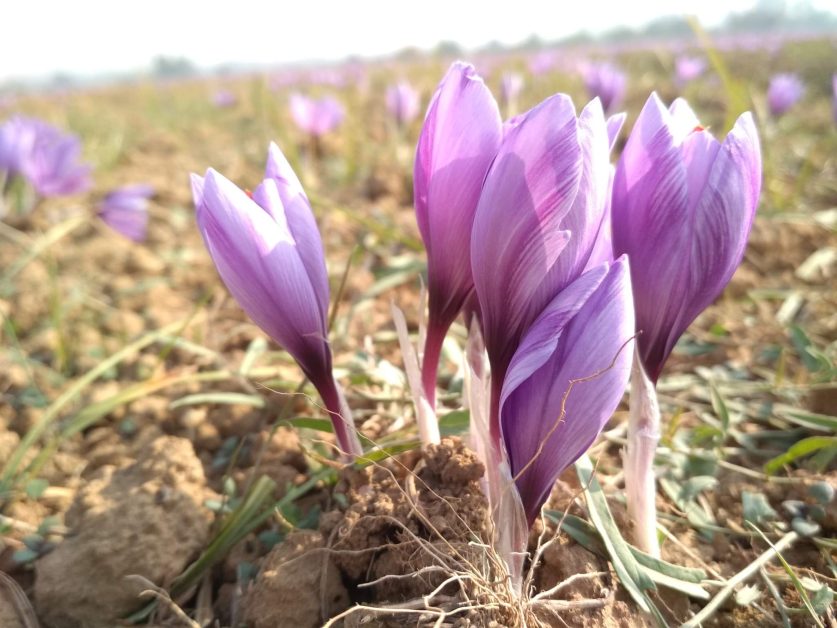 Scattered on both sides of the Dusso road, a small hamlet in the southern city of Pampore Kashmir- the saffron city of Kashmir, about 20 kilometers from Srinagar has fields of Crocus sativus, flowers that produce a valuable spice known as Saffron, or zafran by the Persian name.

Cultivated and harvested in the Karewa (highlands) of Pampore, the city’s more than 30,000 families are associated with saffron cultivation. The term Karewa comes from the Kashmiri dialect meaning, ‘The land of the elevated table’ which is found mostly in the southern part of Kashmir.

Muzaffarpur Rashid, 38, a Saffron farmer who has been in the business for the past twenty years sits beside his farm in Dussu village and has no hope of high yields. “Climate change, poor irrigation, increased urbanization and imports of cheaper Iranian varieties have reduced saffron production in the valley rapidly,” Mir said.

Muzaffar believes that the poor methodology chosen by the government to restore lost crop production has failed in the field. “Our conditions are so bad now that we can’t even pay the costs of the workers who work with us,” he said.

Azad Ahmad, 50, another farmer said that one kg of turmeric is sold for between 2.5 lakh and 3 lakh. “Tariffs can vary when the same price is sold by all sales dealers,” he said, adding that middlemen impose large fees on them, forcing them to choose higher rates for customers.

Abid Khanday, owner of Zamindar Kesar King, a retail shop selling Saffron on the Srinagar-Jammu national highway near Lethpora said they had sold one kg of Saffron for Rs 1.40 lakh. “We sell them at wholesale prices. We have received orders from outside J&K and from various pharmaceutical, ayurvedic, restaurant and hotel companies, “he said.

Kashmiri saffron is well known globally as a spice. It rejuvenates health and is used in cosmetics and for medicinal purposes. It has been associated with traditional Kashmiri cuisine and represents the rich cultural heritage of the region.

“Many people affiliated with this sector have shifted to other livelihoods, leaving their land,” said Syed Ziauddin, a farmer from the city of Pampore.

The government has set up a Rs 40 crore Spice Garden in Dussu village in Pampore as part of the Saffron National Mission, a centrally funded Rs 410 crore project launched in 2010 to rejuvenate saffron cultivation in Kashmir but farmers say it is not of any benefit either.

According to officials at Spice Park, it can store two metric tons of flowers for 48 hours. “The process of stigma separation, scientific drying and laboratory testing, coding and e-auctions takes place here,” said an official.

Three types of Saffron
The saffron available in Kashmir is of three types:

Extracting Saffron from flowers
Its role is to separate the fine turmeric thread from the flowers. Each thread consists of three strands and each must be picked from the flower properly. The threads are then dried in the sun. They also need to be spread evenly at a certain thickness over the white sheet.

The strands are then preserved with a cotton cloth so that air can continue to pass through to avoid moisture build-up and rot. The family sat all night to finish.

The flowers, which bloom for a week or two around early November, are picked after sunrise. Saffron seeds are planted for about four years. Cultivators have to dig into the soil three times before the soil produces Saffron It is carried out in June, August and September. After four years, the old seeds are removed and the new ones are sown there.

In July last year, the J&K administration issued a Geographical Indication (GI) registration certificate for saffron grown in the Kashmir valley, even as saffron crops experienced a decline in production and reduced cultivated land.

Head of the Pulwama Agriculture Service Mohammad Qasim Ghani said the annual production calculated at the end of 2020 for the most expensive spices was 13.2 metric tons.

“This is the highest yield in a decade for a sector in this valley. The award for increased production goes to the Saffron National Mission launched in 2010 where root rejuvenation and sprinkler irrigation were launched, “he said.

Commenting on the functioning of the Taburan irrigation project, the officer said that out of 109 drilled wells, 57 of them are already functioning in Pulwama Regency. “We are also working on something else,” said Ghani.