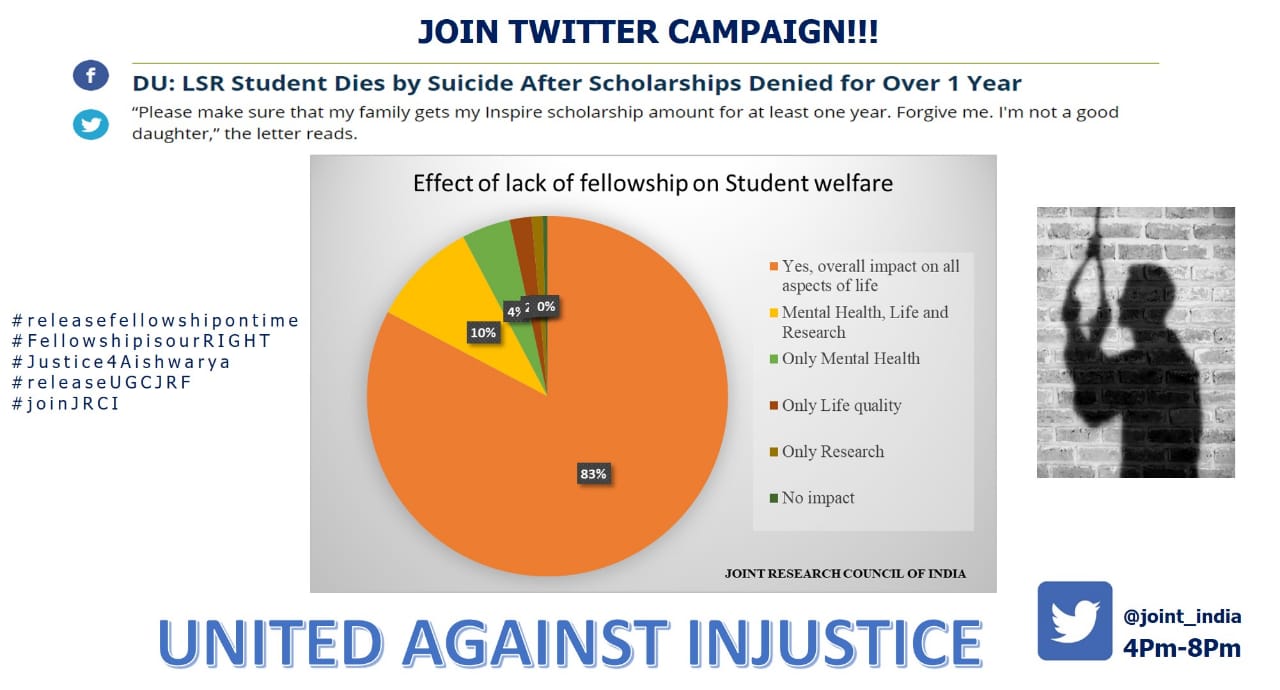 On 19th-Oct, Joint Research Council of India got notified about the unavailability of Research grants and monthly fellowship in Indian Institutions. The fellowship given to any Scholar is the only source of earning/income for most of the scholars.

JRCI in it’s Statement said “It is to be noted that most of the scholars are the sole earning members of their family, their very livelihood rests on the fellowship, which is already meager amount as viewed in respect to what they do which contributes towards the society in its development”.

JRCI in a statement said that after receiving such notifications, Joint Research Council of India collected information of such institutions and the scholars who have been deprived of their rightful fellowship, for the past few months.

“In the lieu of the Situation, within 48 hours JRCI represented the scholars of India and directly send the concerns of fellowship to the ministry of education. Repeated letter has been sent to the ministry, but to no avail, not an owns of concern has been shed by the officials of the afore mentioned ministry”.

Consequently, JRCI took it upon itself to collect the data of aggrieving scholars via polls conducted on social media platforms, sms, massaging and phone calls. Because, It is the education that can change the society, and responsible for changing social and economic life.

Although, commenting about the reactions of either one person or the whole society, is not relevant. But, the joint contribution of a society in needy circumstances makes some relevance with respect to equality and dignity.

JRCI empathized with the aforementioned situation of the scholar over the country,
And contributed their lossless efforts into the ongoing campaign, which is 2-week Twitter campaign initiated by central members of JRCI on 1st-Nov. In the struggle of maintaining a research culture, several scholars has to give up their comforts, and they live their life in a controlled way for the betterment of the society and for the development of the nation.

It can be seen, during the current fellowship-crisis, many scholars are running from the pillar to post in the disbursement of their fellowship, and their research work is getting hampered badly.

“Their time is too much precious, and the GOI should not leave them to indulge with the activities of arranging funds. Instead, their institutions should take the responsibility of successful on time disbursement of the funds”.

JRCI in it’s Statment said that the Ministry did not respond yet, but they
watched each and every single instant as an audience and remain silent, but scholars remained with their stand, When astonish news of the suicide of a research scholar due to the unavailability of funds, shattered JRCI efforts to the ground.

JRCI observed that their Silence is the cause of the suicide of that scholar, and the more silence can trouble them, hence the Ministry recently credited 200 cr. into a Canara-Bank account, for the disbursement of UGC fellowship.

Vikrant Singh, a research scholar of IIT Guwahati and President of Joint Research Council of India said “it is the education that can change the society. Education is Responsible for changing social and economic life. Although saying about one person or about whole society, it’s importance of each one person jointly to contribute for society. In this sense we take attention of Govt /UGC /MHRD and others funding agency to release fund time to time”.

He further said “Lady Sriram College student commits suicide as the one of shocking news. and thoughtful matter. After scholarship denied for over 1 year. “Please make sure that my family gets my inspire scholarship amount for at least one year. Forgive me, I m not a good daughter” the letter reads”.

Vikrant Singh added “on the other hand our PM launched “Beti bachao beto padhao” scheme to increase child sex ratio and to promote girls education but in real it acts totally opposite”.

“If people understand to educate girls then our daughters, sisters in college university or other institution are depressed for the economic burden on parents. And students are depressed to commit suicide. This is shameful for society that a educated person lost life. What will be future of educated society this worries? Hope all students will the get fellowship on time then they will not lost life again” Vikrant Singh said.