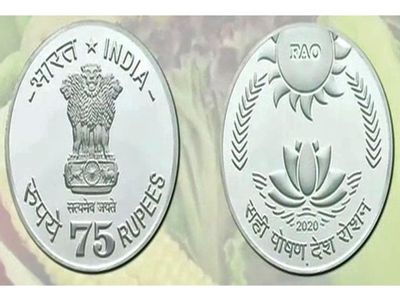 Prime Minister Narendra Modi on Friday released a commemorative coin of Rs 75 to mark the 75th anniversary of the Food and Agriculture Organisation (FAO). The coin will stand as an ode to the long-standing relations between India and the UN agency. Earlier this week on Monday, PM also released a commemorative coin of Rs 100 denomination to celebrate the Birth Centenary of Rajmata Vijaya Raje Scindia today through video conference.

In a statement issued by the Prime Minister’s Office (PMO). This event is proof that the government gives priority to agriculture and nutrition. Also, it shows his resolve to eradicate hunger and malnutrition.

According to the statement, the program is dedicated to the highest priority given by the government to the agriculture and nutrition sector as well as reflects the government’s resolve to eradicate hunger, undernutrition and malnutrition altogether.

In this program, people associated with Anganwadis, Krishi Vigyan Kendras and Organic and Horticulture Campaigns will be involved across the country.

Union Agriculture Minister Narendra Singh Tomar, Finance Minister Nirmala Sitharaman and Women and Child Development Minister Smriti Irani will also attend the event. It is noteworthy that FAO’s goal is to ensure adequate quality food to people regularly so that they remain active and healthy. The FAO’s task is to raise the level of nutrition, improve the lives of the rural population and contribute to the growth of the world economy.

It is worth mentioning that FAO aims to ensure good quality food in sufficient quantity to the people regularly so that they remain active and healthy. The FAO’s task is to raise the level of nutrition, improve the lives of the rural population and contribute to the growth of the world economy.

India has a historical relationship with the FAO. India’s Administrative Service Officer Binay Ranjan Sen worked as Director General of FOA from 1956 to 1967. It was during his tenure that the World Food Program (WFP) was established. WFP has won the Nobel Peace Prize of the year 2020.

It has recently been announced to give this honor to this program of the United Nations for efforts to fight hunger and food security at the global level.