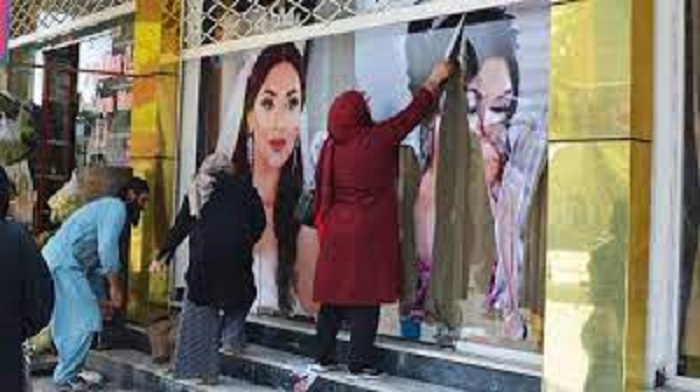 Ground Report | New Delhi: Photo of women being wiped out in Kabul; Photos of women on the frontlines of businesses in Kabul have been removed, as the Afghan capital falls under Taliban control. Taliban fighters entered Kabul yesterday as Afghanistan’s president fled the city, completing a surprise seizure of power that has been going on for weeks as the US and other Western military forces withdrew from the country.

Photos from Kabul showed activists painting images of women outside a beauty salon. When the Taliban last ruled Afghanistan between 1996 and 2001 – the year they were ousted from power by a US-led coalition following the September 11 attacks – women were banned from work and education, And it was ordered that they should not leave their homes unless there was a man.

When they went out, they had to wear a burqa. In one photograph, a man uses a paint roller to cover the image of a woman in a green dress with jewelery and makeup. In another, a woman is seen outside a beauty salon showing an advertisement showing two women, not in a burqa. Women in Afghanistan now fear for their rights and lives as the Taliban have taken control of the country.

Photo of women being wiped out in Kabul

In an interview with BBC News, Taliban spokesman Suhail Shaheen said that women would be able to lead their lives freely under Taliban rule. He said, ‘They should not be afraid. “They have the right to education and work. We have a commitment to this.” Young women in the city have been asking for help in recent days as the Taliban march towards Kabul.

Before 2002, when the Taliban took control of Afghanistan, militants practiced a version of Sharia law that included stoning for adultery, amputation of limbs for stealing and banning girls over the age of 12 from going to school. stopping was involved. A Taliban official has been quoted as saying that the decision to impose such a sentence would be up to the courts.

Reports from areas the Taliban have occupied in recent days indicated that women were already not allowed to leave their homes without male companions and that some female employees were told that Men will now do the job in their place. Women of these areas are also being asked to wear a burqa.

Earlier, a report said that a Taliban spokesman vowed that the militants would respect the rights of women and the press. The Taliban’s statements on Sunday appear to be aimed at pacifying global concern.

The spokesperson said women would be allowed to step out of the house alone and would have access to education and work. But this is in contrast to reports from other parts of the country that have come under Taliban control. In Kandahar, women working in a bank were told that their jobs would now be done by a male relative. In other regions, there have been reports of women not going out alone and being forced to wear the burqa.