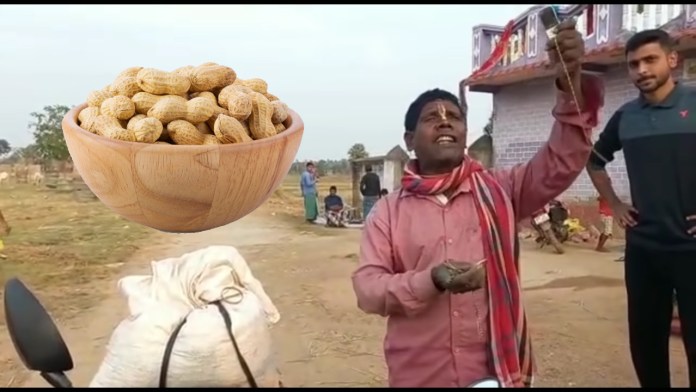 Ground Report | New Delhi: Peanut seller Bhuban; Bhuban Badyakar, a peanut seller from Birbhum, West Bengal, recently composed a song to sell his peanuts. The vendor bikes barefoot to the villages to sell some peanuts, the style of selling him through an interesting jingle when caught on camera and shared on the internet went viral.

Bhuban Badyakar’s song ‘Kacha Badam’ is circulating on social media and everyone is enjoying it now. YouTubers are earning millions of rupees by recording his songs on social media, but Bhuvan had approached the police a few days ago claiming that he was not getting any money. He stopped selling nuts after the song went viral.

Bhuvanbabu sang this song while selling nuts. The person who was buying the nuts was very happy to hear the song. He said to sing the song once again. He told me that the guy told me to do the song. I sell nuts all day after singing this song so I sing the song again as per his words. He recorded the song on the phone. From then on it started circulating on mobile. Now I see that I have become quite famous for that song.

“My song is everywhere on the internet, but I don’t earn a single rupee. I want to protect the copyright of my song and get a share in the profits that my song brings to others, “he told Zee 24 Ghanta Live.

ALSO READ: Who was Ritesh Jha behind Sulli Deals, Why he is out of Jail?

A quick search on YouTube returns numerous remixes of the song “Kacha Badam”, with a couple of videos with more than a million views. Although Bhuban has appeared in some of the videos, some vloggers have even claimed that the song is his.

Who is Bhuban Badyakar

Bhuban Badyakar also called because the Peanut Man is a peanut seller who belongs to Kuralguri village in Dubrajpur of Birbhum. Bhuvan Badyakar lives in his village with his two sons and wife. He had recently gone viral through his Bengali song called “Kacha Badam” (unroasted peanuts) where he became a sensation among the people and especially among political leaders.

Be it ‘Bachpan ka Pyaar’ of Sahadev Dirdo, ‘Rasoda song’ or ‘Kya Karoon main mar jaun’ song. Now anything can go viral in India. Now, look at the song Kacha Badam. When Bhuvan Badyakar sang ‘Kachcha Badaam’ while selling peanuts, he would not have even thought that he would soon get viral on social media.