The Kali river, which forms the boundary of India and Nepal, is also connected to the territorial dispute of Kalapani-Limpiadhura-Lipulekh as the river originates in the triangular area that is claimed by both countries. Once the Kali River descends from the Himalayan foothills and onto the Gangetic plain, at Banbasa near the town of Tanakpur, its name changes to the Sharda River. The river is a part of the Ganga river system, joining the main river near the city of Madhubani.

This river is the center of the Pancheshwar Dam. The 5040-MW Pancheshwar multipurpose hydroelectric project is to be built over the Mahakali river jointly by the Indian and Nepalese Governments.

The map above shows the location of the under-construction dam. The dark yellow line is the international boundary that goes along the Kali river in Uttarakhand. The white patches seen on the map are the mighty Himalayas. The close proximity of the dam to the Himalayas is a serious matter of concern.

A brief about the project

This was first conceptualized in the 1960s. The Rs 33,108 crore Pancheshwar Multipurpose Project involves the construction of two dams on the river Mahakali, for irrigation, flood control, and generation of 5,040 MW of power for both countries. The project is to come up near the Pancheshwar temple, 2.5 km downstream of the confluence of the Mahakali and Sarju rivers. The main Pancheshwar dam would rise 315 meters and the second one downstream would be 81 meters high. 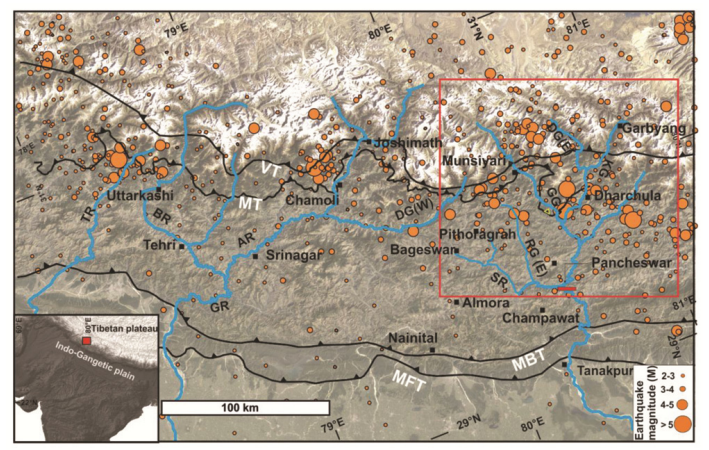 Possible consequences due to the project

The project lies in areas with Seismic levels 4 to 5. If any mishappening takes place and the dam is harmed, the destruction will be on a very heavy scale. But damage on the hills will be a little less compared to Gangetic plains.

Communities on both sides of the Mahakali river – 31,023 families, close to 50,000 people or more, will be directly impacted as a result of the dams in three districts, namely Pithoragarh, Champawat, and Almora in Uttarakhand on the India side. The number of directly-impacted families is close to 3,000.

A total of 3,735 hectares of private land will be acquired from 125 villages for the Pancheshwar and Rupaligaad projects. An analysis of the distribution of compensation amount shows that 23 villages in one district alone (Pithoragarh) will be allocated Rs 5,452 crore, i.e. 84% of the total compensation budgeted for private land acquisition – Rs 6,530.1 crore.

How are locals impacted by the construction

Red area shows the region that will drown due to dam construction.

As we can see the major city or town in the area is Pithoragarh. Out of the 50,000 people displaced, the majority will settle in the nearby areas of the town. While others may find their new homes in cities like Haldwani, Rudrapur, Tanakpur, and Kiccha.

People will be displaced from their motherland and will have to leave their culture.

New problems will arise for Pithoragarh to settle the people and to maintain the connectivity to the nearby areas.

The Himalayan area doesn’t need such big hydropower projects. They will just cause mass destruction and nothing else. Pancheshwar dam construction started in 2016 and is expected to finish by 2028. But there’s no information regarding it on the Internet. No official website shows the progress of the project. Only one website from the Nepal gives information that also is in Nepali and isn’t updated regularly. Isn’t it unusual not to have any information on such a big project?

The DPR is full of mistakes when the concerned matter is between two countries. The project is a threat to the Himalayas.

If our opposition can make the central vista project a national issue. Why can’t this be a major topic? The concern should be raised in the UN as it concerns 2 countries. For people living in the Himalayas, life matters more than money. They love their surroundings and worship them. Rivers and mountains are like gods to them and nobody wants their god to be harmed.