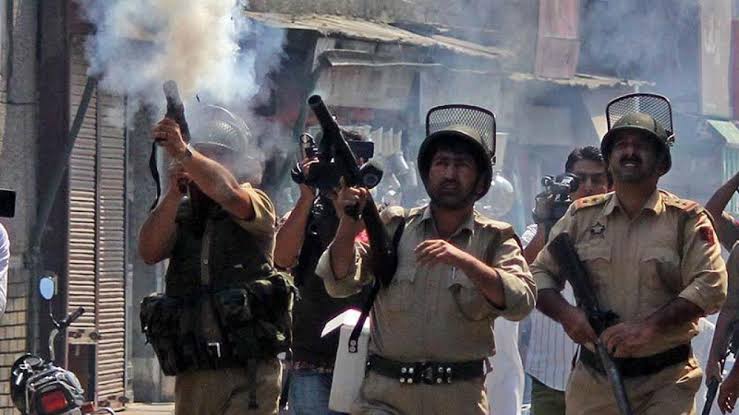 Continuing its efforts to lace its men with high-tech gadgets, Jammu and Kashmir police is all set to procure Anti-Riot Gas Masks (ARGMs) to protect its personnel on ground from the toxic material produced by tear gas and other gases used for controlling crowds.

J&K police headquarters Jammu has floated tenders for the supply of ARGMs from the authorized manufacturers.

“The tenders (technical bids) will be opened online on December 4 at police headquarters Jammu,” read the e-tender floated the PHQ Jammu.

A senior police officer said that police is doing its level best to procure all important and latest gadgets to make the force one of the best in the world.

“ARGM will help policemen to remain safe from the toxic material that is produced after the use of tear gas, pepper gas, chilly grenades as means to deal with the crowds,” he said, wishing not to be named, news agency KNO reported.

He said that a gas mask is used to protect the wearer from inhaling airborne pollutants and toxic gases.

“The mask forms a sealed cover over the nose and mouth, but may also cover the eyes and other vulnerable soft tissues of the face,” the official privy to the bidding process said, adding, that, “Most gas masks are also respirators, though the word gas mask is often used to refer to military equipment (such as a field protective mask).”

The police official said that the gas mask only protects the user from digesting, inhaling and contact through the eyes (many agents affect through eye contact).

“Most combined gas mask filters will last around 8-hours in a nuclear biological chemical (NBC) situation. Chemical specific filters can last up to 20 hours in an NBC situation,” he said.

The first gas masks mostly used circular lenses made either of glass, mica or cellulose acetate. With the exception of the latter, these materials were quite brittle and needed frequent replacement.

The fresh tender comes after 14 days of the previous one where J&K police had floated tenders for mounting its Bullet Proof Mobile Vehicles (BPMV) with the Mobile Command Centers (MCC’s) to boost its technical capability.