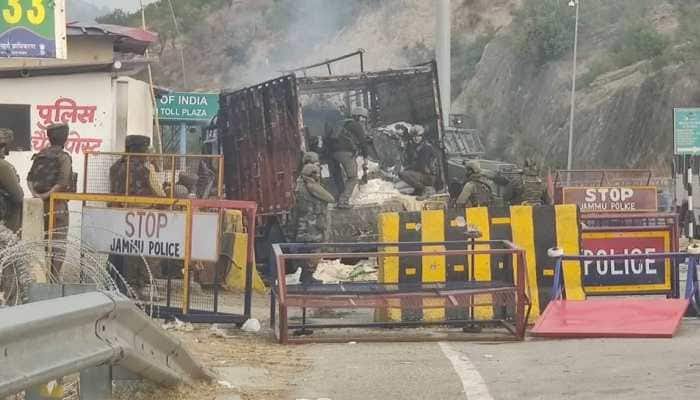 Four militants have been killed in an encounter between security forces and militants in Nagrota, Jammu and Kashmir. Two security personnel are also reported to be injured in this incident.

Jammu and Kashmir police gave the initial information about this encounter through a tweet.

According to the police, police, CRPF and Indian Army were involved in this encounter on Thursday morning near Ban Toll Plaza, Nagrota.

Talking to the press about this, Jammu Zone IG Mukesh Singh said, “We were constantly getting information from intelligence sources that armed militants from across the border can come towards us. That’s why we increased checking.

Additional military forces were deployed at some places. On Thursday morning, when a truck was stopped near the toll plaza of Nagrota, its driver ran away as soon as he got down. When we got suspicious, a search of the truck was started.

During the search, a fire was carried out on our soldiers after which the encounter started. “

This encounter lasted for about three hours. During this, grenades were hurled at us. Continuous firing was done. The CRPF and the Indian Army also supported the Jammu Police in this encounter. Two policemen injured us, who are now out of danger. “

Mukesh Singh said, “The identity of the four terrorists killed in this encounter has not been established yet.”

A heavy amount of ammunition has been recovered from them. He had 11 AK-47 rifles. 3 pistols, more than 30 grenades and some instruments have also been found from him.

Each terrorist had three big weapons and some small arms. In recent days, terrorists have not been killed with such a huge amount of influence. It seems that these terrorists who were killed wanted to carry out a major operation. “

Earlier information was coming that the driver of the truck has been arrested. But Mukesh Singh said that “the truck driver is still absconding. His search is on. “

Earlier Jammu and Kashmir DGP Dilbag Singh had claimed that ‘all the four extremists were associated with Jaishe Mohammad and he was getting constant instructions from across the border’.

But at the press conference, Mukesh Singh said that “only after investigation, something can be said in this concrete manner.” However, from the kind of weapons they had, it seems that these terrorists were associated with Jaishe Mohammad. “