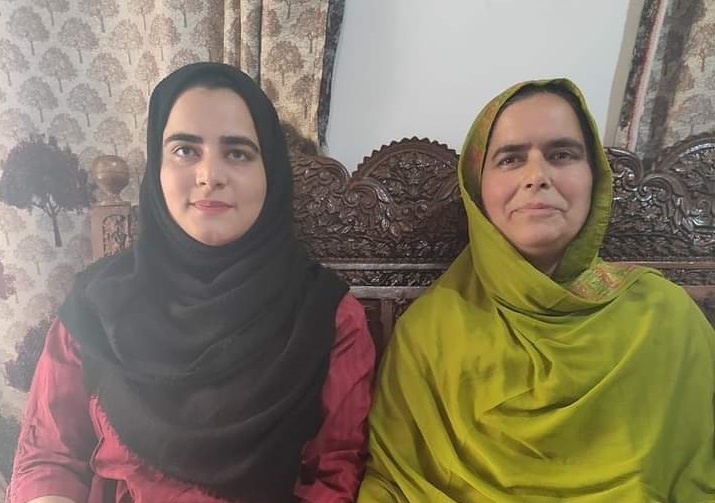 A 23-year-old girl Nadia Baigh from the frontier district of Kupwara has cracked the (UPSC 2020) Union Public Services exam and ranked 350. Nadia Baigh, whose parents are government teachers, is an Economics (Honours) graduate from Jamia Millia Islamia, New Delhi. Hailing from Punzwa village of Kupwara, Nadia Baigh said she aimed to crack the exams right from the day she passed her Class 12 examination.

Baigh did her schooling up to 12th from Kupwara district in government schools and then went to New Delhi for pursuing graduation from Jamia Millia Islamia and completed in 2017.

“I don’t know how to express my feelings right now. All credit goes to my family, especially my brother, who encouraged me all through during my studies for civil services,” she said.

Her two sisters are doing MBBS in SKIMS, Soura and her brother has completed BBA, who is also preparing for civil services.

She first attempted in 2018 but could not make it through to preliminary exams and in 2019 she did it in her second attempt.

Baigh said internet blockade makes it difficult for students to study. “However, I was in Delhi during all this time where I prepared for this exam. But the only difficulty I faced was that I could not connect with my family for the time when there was a communication blockade after August 5 last year.”

She says her optional subject was sociology for which she went to a coaching centre and the rest of the studies she did it herself.

“I feel very elated that my hard work has yielded fruit for me,” she says.

She says that her appeal to the students is to remain focused to achieve their goal.

The list of 829 successful candidates made public by the UPSC today included 16 from the erstwhile state including two from Ladakh, officials said.

The UPSC has declared the final list of selected candidates based on the result of the written part of Civil Services Examination, 2019 held in September, 2019 and the interviews or Personality Test held in February-August, 2020.

According to last year’s civil services exam notification, the upper-age limit of 32 years to take the test was further relaxable for up to a maximum of five years if a candidate had ordinarily been domiciled in the Jammu and Kashmir during the period from January 1, 1980 to December 31, 1989.

The Civil Services exam 2020 was scheduled to be held on May 31. The exam has been rescheduled to October 4 in view of the coronavirus crisis.