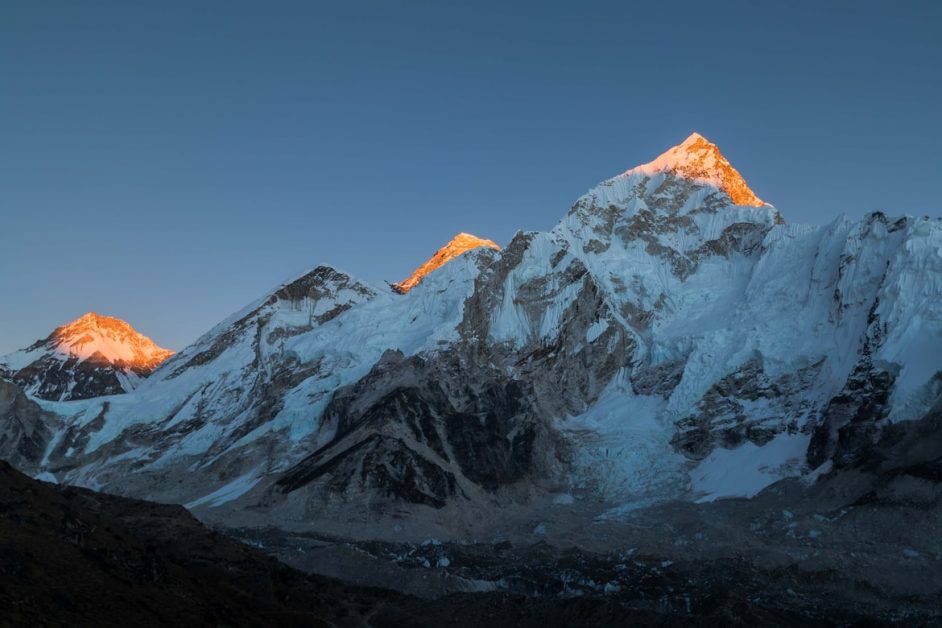 Ground Report | New Delhi: Mount Everest glacier melting; It is not new that glaciers around the world are losing mass, but until now little was known about what is happening to ice above 5,000 meters. A group of experts decided to shed light on this matter and climbed to the last Everest glacier to collect cores (columns of more than 2 meters of ice) and install weather stations.

After analyzing data from the South Col Glacier (8,020 m), the results showed alarming conclusions: the highest glacier, on the highest mountain on Earth, is losing decades of ice every year. It is estimated that it may have lost half of its mass since the 1990s as a result of rising temperatures in the region, and could disappear completely by the middle of this century.

The melting of glaciers is a widely studied topic. Yet little scientific attention has been paid to glaciers at the highest points on the planet, the researchers argue in the study, published in the Nature Portfolio Journal Climate and Atmospheric Science.

A team of scientists and climbers, including six from the University of Maine, visited the glacier in 2019 and collected samples of a 10-meter-long ice core.

At the rate at which the highest glaciers are disappearing, the Mount Everest expedition could become more challenging, said University of Maine climate scientists Marius Potocki and Paul Mayewskijis, as the ice and snow cover will continue to thin in the coming decades. , which will become more difficult to climb.

The team’s findings are the result of the latest research from the 2019 National Geographic and Rolex Perpetual Planet Everest expeditions. Scientists, including six from the University of Maine’s Climate Change Institute, study environmental changes to understand future effects for life on Earth as global temperatures rise.

Mayewski said this latest research confirms the heights that anthropogenic climate change reaches and that other high mountains act as a trailhead or bellwether for glacier systems. The massive decline of the glacier is expected to have a huge impact on the expeditions. Mayewski is a glaciologist and director of the Climate Change Institute of Rumen. Mayewski is always involved as a lead scientist for the Everest expedition.

When did ice loss from Everest intensify?

The results show that, once the glacier’s ice was exposed, it lost about 55 meters of ice in a quarter of a century. The researchers note that the glacier has gone from being snow-packed to predominantly ice, and that change may have started as early as the 1950s. But ice loss has been more intense since the late 1950s, 1990.

Also Read:  Pakistan floods: why have they been so extreme this year?

The study points to the important balance that the snow-covered surface provides. The highest mountain glacier systems are prone to loss as much of the ice cover build-up stop changes. It involves passing from a solid to a vapour state and surface melting driven by climatic trends. Everest’s highest glacier has served as a watchdog for this delicate balance. Glaciers have also demonstrated that the Earth’s roof is also affected by rising temperatures from anthropogenic causes.

Previously, another study reported that Glaciers shrink due to global warming, but do so faster if they flow into a lake, according to a report funded by the Swiss National Fund (SNF). The scientists analyzed in detail the situation with the mountain glaciers indicates in a statement the FNS, the main Swiss institution for the promotion of scientific research.

The study covered 319 glaciers in the Himalayas whose area exceeded three square kilometres, a fifth of which form lakes. The glaciers of this region feed great rivers such as the Ganges and the Brahmaputra and contribute to the water supply of 500 million people.

Climatic projections for the Himalayas warn of ever-increasing temperatures and massive loss of glaciers. Potocki says that even the summit of Everest is affected by rising temperatures due to anthropogenic factors.

Members of an international team of scientists and climbers led by the National Geographic Society and Tribhuvan University were involved in the Mount Everest expedition.