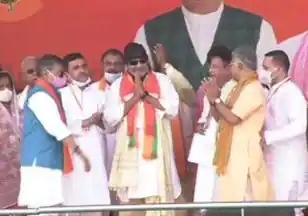 Film actor Mithun Chakraborty, who hails from West Bengal, joined the party on Sunday in the presence of state BJP president Dilip Ghosh.

Mithun Chakraborty took the membership of the party on the same platform in which ‘Modi Parade Ground’ in Kolkata, PM Modi is going to hold an election public meeting on Sunday.

The Bharatiya Janata Party has described it as a ‘historic moment’.

Kailash Vijayvargiya, the general secretary of the Bharatiya Janata Party, wore saffron strips and welcomed them to the party.

Vijayvargiya had claimed on Sunday morning that Mithun Chakraborty would be present at PM Modi’s rally to be held at the Brigade Grounds in Kolkata.

Former Trinamool leader Dinesh Trivedi, who joined the party a day earlier, is also present on the stage of Kolkata rally.

Mithun Chakraborty, 70, was a Rajya Sabha MP on behalf of the party for two years, before resigning from the Trinamool Congress.

Before the West Bengal assembly elections, many TMC leaders left the party and joined the BJP.

Voting is to be held in eight phases in West Bengal, which will start from March 27 and run till April 29. On May 2, votes will be counted.

Kailash Vijayvargiya had confirmed that Mithun would be present at Modi’s rally, but kept the news of his joining BJP in suspense.

However, now Mithun has joined the BJP and trying to surround the BJP on the issue of external will not be less than a big shock for Mamata Banerjee.