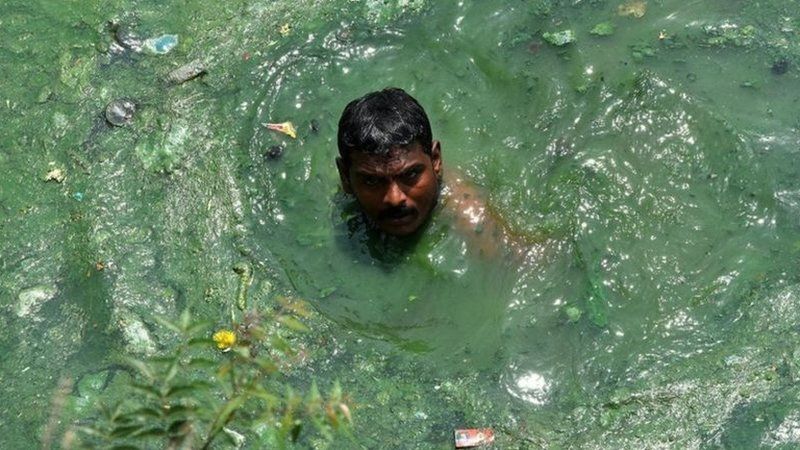 For many years, Shiva has been assisting the police in retrieving bodies from Hussain Sagar Lake in the southern Indian city of Hyderabad. And then one day they stopped a man as they were about to jump into the lake. This is the first time they have saved someone’s life.

Police in India lack funding and training. Most do not know how to swim and the police are not funded to hire professional divers. So it is not uncommon for them to have to rely on such unconventional and risky arrangements.

Shiva says the police were shocked when he offered his services. “At first he refused, saying I was too young. But later, I persuaded them. ‘

He got Rs 40 for his first job. But it was a good amount of money for them at the time.

Shiva Hussain lives near Sagar Lake, a large artificial lake in the heart of the city. It is a popular tourist destination and statues of Hindu deities are also immersed during the Ganesha festival.

The idols are scattered in the water and Shiva takes out iron rods from them and sells them to the scavengers.

But the lake is also a place where people come to commit suicide and Shiva often helps the police in removing bodies from the water. Sometimes they are also used by the police to remove bodies from other lakes and rivers.

But in reality, Shiva does more than just remove bodies from the lake. They often save people when they jump into the water and sometimes they pull them out alive.

“I have forgotten how many bodies I have found,” he told the BBC. But I have saved 114 lives.

He is now training his wife to swim to help exhume women’s bodies.

Inspector B Dhana Lakshmi, stationed at the police station near Sagar Hussain Lake, admits that Shiva helps her a lot.

“I can’t confirm how many lives they’ve saved over the years, but I think there are more than a hundred,” she said.

Suicide is still a crime in India and those who are rescued by Shiva run away before they can tell the police.

Over the years, he has lost many of his friends to drugs, disease, hunger and accidents,” he says. “The boy who taught me to swim, my brother Lakshman, also drowned accidentally and another close friend died while rescuing someone.

He says he could not save his loved ones but now he is trying to save others and contribute to the society.

Saving lives sometimes gives them some money. Sometimes people give them some money to save their lives. And with the coverage in the local media, he is becoming a celebrity, which is why he has started getting small roles in Telugu films. But Shiva says he doesn’t consider saving lives a job.

He says the motive for people’s suicides is often the pressure of exams, failed love, family quarrels and economic problems. He says that sometimes older people try to kill themselves because their children leave them helpless.

Recently, a man suspected of having the corona virus committed suicide by jumping into a lake. Behind him, a friend jumped in to save him, as did Shiva. But Shiva only managed to save this man’s friend. He says the family of the deceased did not even take his body.

“That’s why I lit his pyre.” Shiva says he saved the life of another man who said his family suspected he had the virus and therefore did not care for him.

But they also have to pay a heavy price for their work. Hussain Sagar Lake is a very polluted lake and jumping and swimming in it without any special clothes also causes wounds on Shiva’s body. He has also contracted typhoid and other diseases.

“There is no time to wear gear. You have to react quickly. “If you see someone jumping, you have to jump right away.”

In the summer, the lake stinks and snakes are often seen on its shores, but Shiva has no plans to give up.

“I want to stay here,” he says. Only if I stay here will I be able to save lives. Life-saving satisfaction is paramount.