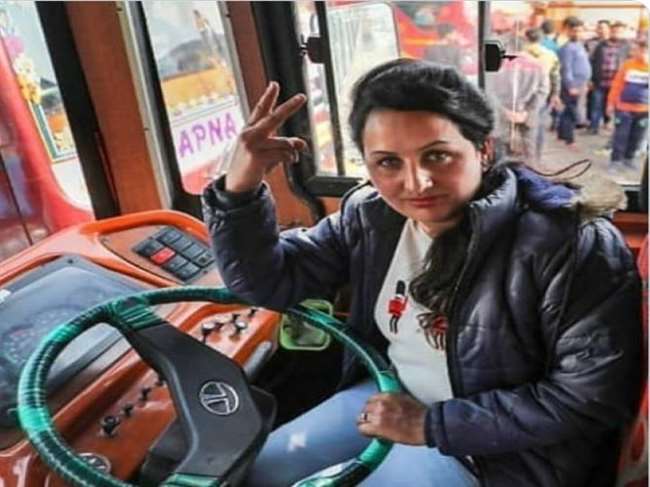 Pooja Devi, the first female bus driver of Jammu and Kashmir, is in the news these days, but has also faced opposition from family and society to get into this profession. Her Mother is proud of her daughter today, while in-laws are also proud of her daughter-in-law. The encouragement of husband and children encouraged Pooja further. The central government has saluted the spirit of the daughter of the new Jammu and Kashmir.

Pooja of Jandrali village of Basohli in district Kathua used to run after a child when a carriage passed through the area. The father died in childhood. Mother raised all. She has three sisters and a brother. Pooja, 34, married in Sandhar village, says that she was fond of driving and flying airplanes since childhood. Due to family poverty, she could not read much, but kept suppressing the dream in her mind.

Initially, the family had to face social difficulties when they insisted to learn driving. Also did tailoring for some time. Married in the year 2004 in Sandhar village. Husband Somraj works in another state if he does not get any work here. He has three children. The elder daughter and son are studying in the village near grandparents. Younger son Karthik stays with him. Have rented house in Shakti Nagar in Jammu. She leaves for the bus in the morning. On getting time, she teaches Karthik in the bus.

Pooja’s father-in-law was once against becoming the daughter-in-law’s driver, but today he is happy that her daughter-in-law’s decision is fine. Pooja’s father-in-law Krishna Chand said that it is a matter of time, we have changed, we have changed our thinking and now feel good, they are proud of their daughter-in-law. Has illuminated the name of the entire family. And daughters should get into driving profession. We belong to a remote village. Slowly our thinking is changing towards daughters-in-law.