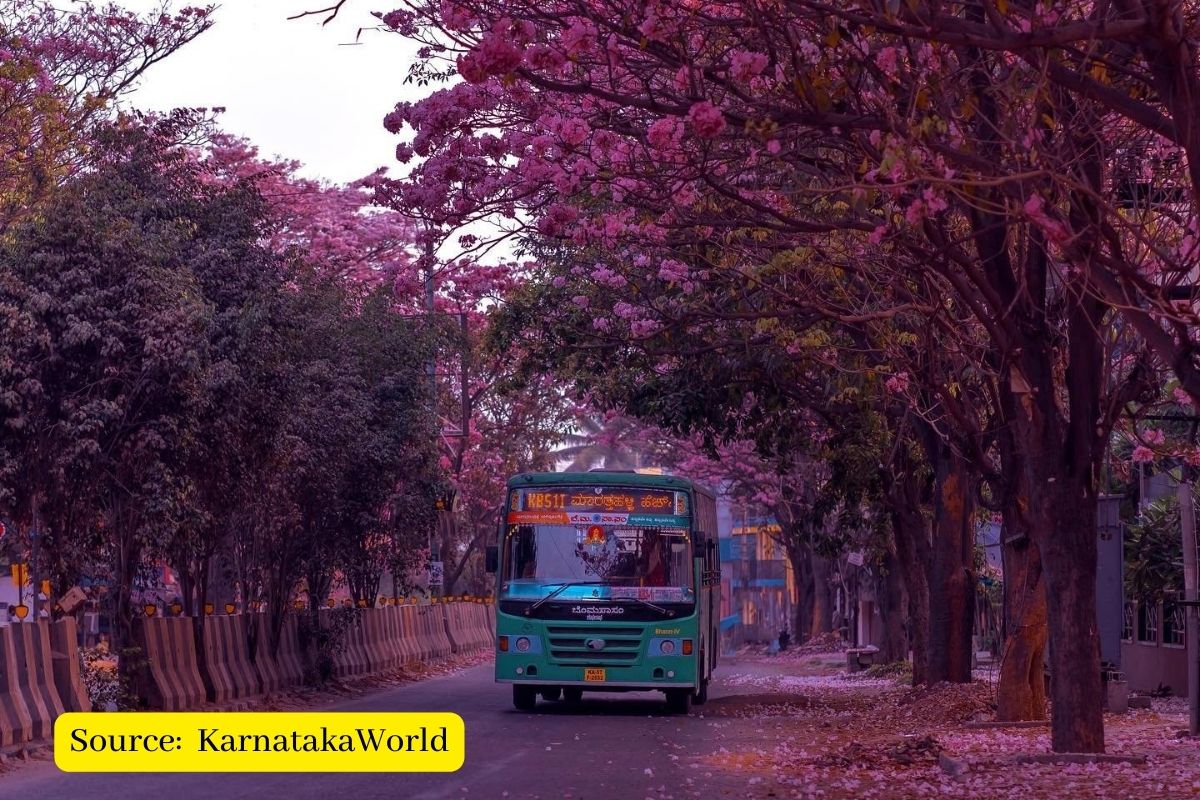 Bengaluru city is often identified with its honking traffic and crowded corners, but from December to March, the city’s crowded landscape is bathed in soft pink blossoms. Images of flowering trees in Bangalore have gone viral on social media.

The astonishing photographs of the towering trees bedecked with pink blossoms that were shared by the official Twitter user of the Karnataka Department of Tourism have gone viral.

While cherry blossoms are associated with countries like Japan and South Korea, the glimpse of pink blossoms on the roads of India is truly a sight to behold. As the buses pass on the road, the flowering trees on both sides of the road give the effect of a painting.

The images clicked by Biplab Mohapatra were shared by Karnataka Tourism. “The Pink Trumpets or the Tabebuia Avellaneda have started to blossom here in Bengaluru. That time of the year when certain parts of Bengaluru turn completely pink,” Karnataka Tourism wrote.

These flowers were introduced to Bangalore by the British. The story goes that they wanted to remember spring at home, valuing fascinating ornamental species over native ones. They then introduced pink trumpets to the region, using them to create a certain botanical aesthetic.

The British planted various neotropical flowers throughout the country to beautify the streets. Pioneering botanists like John Cameron and Gustav Hermann Krumbiegel planted the first seeds of these trees in the then Kingdom of Mysore during their precedence over Lal Bagh.

Tabebuia Rosea flowers are in full bloom in spring. You can enjoy the beauty of nature by visiting parks or walking on random streets and you will find beautiful trees laden with pink flowers.

Also Read:  Why are people in Bengaluru against widening of Sankey Road?

Dense pink canopies cover the Jayanagar, Indiranagar and Koramangala areas. Bangaloreans also head to the famous Cubbon Park and Benniganahalli Lake to enjoy the riot of colours. Even neighbourhoods like AECS Layout and Silk Board, which normally produce images of vehicles piled on top of one another, are carpeted in tender petals as trumpets fall from the trees lining their driveways.

According to FirstPost, “one of Bangalore’s most celebrated horticulturists, SG Neginhal, subsequently planted them as avenue trees in the 1980s, ensuring that rosy clouds graced the streets during winters for years to come.”

In Japan, the cherry blossom blooming during spring is a worthy enough event to dedicate an entire festival and verb to it. ‘Hanami’ refers to the Japanese custom of carefully observing and appreciating flowers and their transitory beauty, the flowers are usually sakura or cherry blossom.

As pink trumpet trees are only used for ornamental purposes in India, it is perhaps not surprising that being in their very presence is healing. For the British, the tabebuia tree may have provided a sweet visual reminder of their distant and unseen homeland.

Cut down a few years later and each winter, these trees shed their leaves only to produce small buds in early January. As the weeks go by and the weather turns from cold to cool and windy, these open up in an explosion of pink, bathing neighborhoods in postcard-perfect blooms.