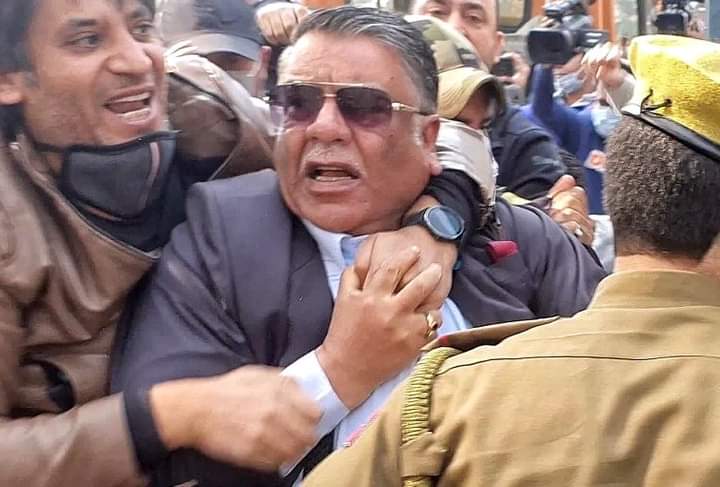 PDP leaders organized a protest rally from the party headquarters in Srinagar to the Press Enclave to protest against the central government new land law.

Several party leaders including Khurshid Aalam were detained by the police outside the party headquarters here. Others who were detained include Waheed Parra, Suhail Bukhari, Rouf Bhat, Mohit Bhan and others.

Pertinently, a similar protest was held in Jammu yesterday in which leaders from the PDP condemned the new land law.

Meanwhile PDP president and former chief minister Mehbooba Mufti while slamming the administration for the move, tweeted: “PDP office in Srinagar sealed by J&K admin & workers arrested for organising a peaceful protest. A similar protest was allowed in Jammu so why was it thwarted here? Is this your definition of ‘normalcy’ that’s being showcased in the world?”

In another tweet, she said they will continue to raise their voice collectively and won’t tolerate attempts to change demographics.“PDP’s @parawahid, Khurshid Alam, Rouf Bhat, @MohsinQayoom_& @buttkout were arrested by J&K police for protesting against the settler colonial land laws thrusted upon people of J&K. We will continue to raise our voice collectively & wont tolerate attempts to change demographics,”.

Also Read:  Who was Vijay Kumar got killed in Kashmir?

Pakistan rejected the new land laws calling it a violation of UNSC resolutions. The new law passed by the Centre will permit outsiders to buy non-farm land in Kashmir.

In a gazette notification issued on Tuesday, the MHA removed the phrase “permanent resident of the state” from Section 17 of the Jammu and Kashmir Development Act which deals with the transference of land in the Union Territory.

What is new land law?

The Ministry of Home Affairs has repealed most of the earlier land laws, including the Jammu and Kashmir Prevention of Fragmentation of Agriculture Holding Act, 1960.

Before the removal of Article 370 last year, nobody could buy land here except for the permanent residents of Jammu and Kashmir.

Recently, the Government of India had said that only Domicile certificate holders or permanent residents here can buy land or property in these union territories.