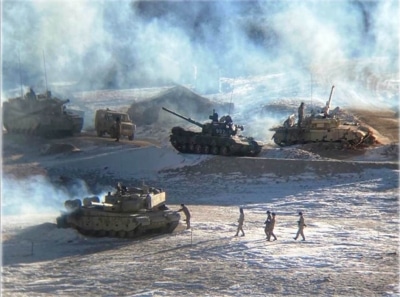 The Indian Army on Tuesday released video clips and pictures of Chinese troops going back after India and China agreed to disengagement in Ladakh’s Pangong lake area.

In the video clips and photographs, it is seen that Chinese soldiers are breaking the bunkers and breaking the walls made of stones with hands and with the JCB machine.

ALSO READ: The Story Of Kashmiri Awaiting Release From Jail

Under the agreement between the armies of the two countries, both sides will have to establish the ground situation before the dispute started in May 2020.

Military sources say the disengagement process is on the ‘right track’ and that the troops deployed there will also be recalled after the tanks, military vehicles and other machines of both armies are removed.

In addition, the withdrawal of troops on both the northern and southern shores of Pangong Lake is expected to be completed by 20 February.

In addition, the Indian Army team along with the Chinese People’s Liberation Army (PLA) team will physically (physically) verify and re-validate the troops’ retreat process at Pangong Lake.

A senior government official said, “This will be a joint inspection team from both the Indian Army and the Chinese PLA.”

In addition to building a military outpost in the Finger 7 area from China, long-range firearms guns were also deployed. Bunkers were built in this area and permanent structures were also built to accommodate thousands of People’s Liberation Army soldiers.

“We will physically verify whether everything has been removed from the area or not,” the official said. We will go to Finger 8 to check if the withdrawal process is going on as per the agreed terms.”

The agreement states that Chinese troops will move back to Finger 8 and the Indian Army will return to Dhan Singh Thapa’s outpost between Finger 2 and 3 on the northern bank of Pangong Lake. In addition, there will be a temporary ban on military activities, including patrolling in traditional areas.

The shape of the mountain on the banks of Pangong Lake is such that it looks like fingers. That is why they are called finger. Their number is eight. While India claims to have its territory till Finger 8, China has raised controversy by claiming Finger 4. The eight-arm distance between Finger 4 and Finger 8 on the northern bank of Pangong Lake has led to several confrontations between the two armies.

China deployed many of its soldiers and other equipment along the Finger 4 and south of Pangong Lake to change the status quo on the Line of Actual Control (LAC). Last year, China deployed boats ahead of Finger 8 in the lake due to tensions. The patrols will resume only once the military has retreated and agreed to diplomatic and military negotiations.

To the south of Pangong Lake, where the armies of the two countries were completely face-to-face, the troops have also started retreating. Here in some places the tanks of both countries were at a distance of only 100 meters.

It is worth mentioning that there has been a military standoff between the two countries on LAC for about ten months. The confrontation on the northern bank of Lake Pangong began when Chinese troops tried to change the status quo by infiltrating into and off the lake in May last year. Gradually it collided and spread to regions. On the southern bank of the lake, India had strengthened its strategic position on the hills much higher than China.

However, now the process of withdrawing troops from the deadlocked places has started from both countries, due to which the deadlock is seen to be over.