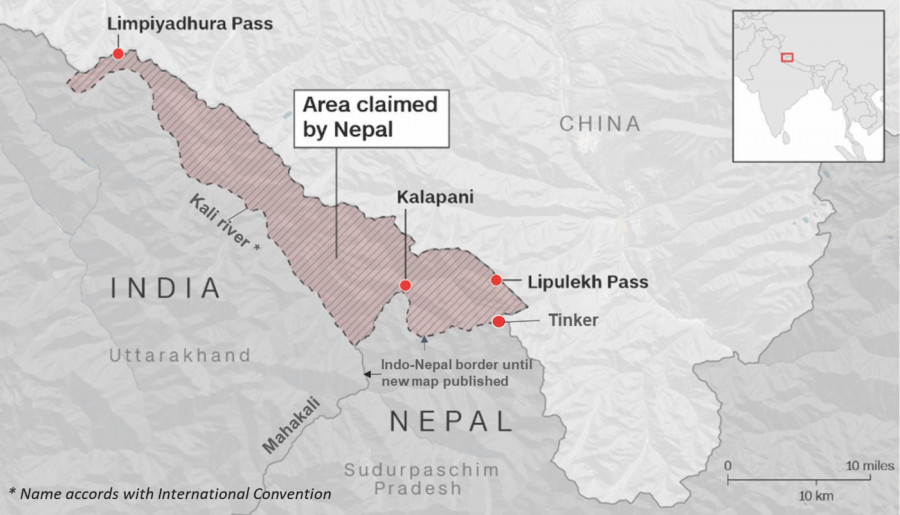 Ground Report | New Delhi: India Nepal border dispute; The Nepalese government has said its border disputes with India must be resolved on the basis of historical facts and evidence, including the Lipulekh, Limpiyadhura, and Kalapani disputes.

Nepal has responded in this regard on Sunday, a day after the statement from the spokesman of the Indian embassy in Kathmandu arrived. India had re-emphasized on Saturday that the ongoing construction on the border is in India’s territory.

Responding to recent reports on the India-Nepal border, an Indian Embassy spokesman said on Saturday that India’s position on the border is well known, firm, and clear and has been conveyed to the Government of Nepal.

The next day, the Minister of Communications of the Government of Nepal reported on the decision of the Nepalese cabinet, which said that Nepal would make diplomatic efforts to resolve the border dispute.

Communications Minister Gyanendra Bahadur Karki told a press conference on Sunday: “The Nepalese government will settle any dispute between Nepal and India on the basis of historical treaties, documents, maps and facts. Committed to doing so in accordance with the spirit of relationship

Gyanendra Bahadur Karki further said: “The area east of the Mahakali River, Kalapani, Lipulekh and Limpiyadhura is the land of Nepal and the Government of Nepal’s opinion on this is clear and firm. The Government of Nepal has been urging India to stop any unilateral road construction on Nepali territory.

The border dispute between Nepal and India has been in the headlines continuously for the past month, which began with the statement by Indian Prime Minister Narendra Modi.

Prime Minister Modi had spoken about the plan to expand the roads in Lipulekh on December 30, which was criticized by the political parties in Nepal and after that first came the statement from the Embassy of India in Nepal and then the response from the Government from Nepal.

Prime Minister Modi mentioned the construction work of the Border Roads Organization (BRO) in the Lipulekh area at a public meeting in Haldwani, Uttarakhand on December 30.

He had said there: “It is because of those who deprive you of comfort facilities that Mansarovar was denied entry to connect with Manaskhand road.”

“Not only are we working on the Tanakpur Pithoragarh All Weather Road. We have also built a road in Lipulekh and more expansion work is underway.”

With this declaration, the border dispute between India and Nepal came to the fore because Nepal has been declaring Lipulekh as its territory. However, this area has been under Indian military control for a long time.

A series of lipulekh controversies

Shortly after the opening of the road, the Indian ambassador in Kathmandu was summoned to the Ministry of Foreign Affairs and a diplomatic note was issued urging India not to engage in any activities on Nepalese soil. When the dispute arose, India responded that it did not build roads on Nepalese soil. But Prime Minister Modi’s latest comments indicate that India has continued to build roads in the region.

Previously, Nepal had given India a diplomatic note even after including India’s Kalapani and other areas on its map. Nepal has also updated its map and included areas that were previously omitted, including Limpiyadhura. After Nepal offered to resolve the border dispute through talks, the Indian side said that the talks will be held at the Foreign Minister level after resolving the crisis situation due to Covid-19.

India and China signed an agreement in 2015 to turn the Lipulekh Pass into a trade route without Nepal’s knowledge. Opposing the deal, Nepal immediately sent diplomatic notes to the two neighboring countries.

Nepal has been claiming that all the areas including Limpiyadhura, Kalapani and Lipulekh on the east side of the Mahakali river are part of the territory of Nepal on the basis of the Sugauli Treaty of 1816. Efforts are being made to build a consensus to resolve emerging issues in Nepal-India relations including the Sugauli Treaty.

Referring to Delhi’s delay in holding a substantive discussion on the Nepal-India border dispute, Nepalese experts have said that the Kalapani dispute should be a topic of bilateral discussion during the Nepalese Prime Minister’s visit to India.

Some Nepalese diplomats recall that after the Indochina war in the early 1960s, Nepal also raised the issue of troop withdrawal from Kalapani in connection with the elimination of the villages of these Indians on the northern frontier.

The issue was raised during then Prime Minister Manmohan Adhikari’s visit to India in 1994 and his Indian counterpart IK Gujral’s visit to Nepal in 1997.