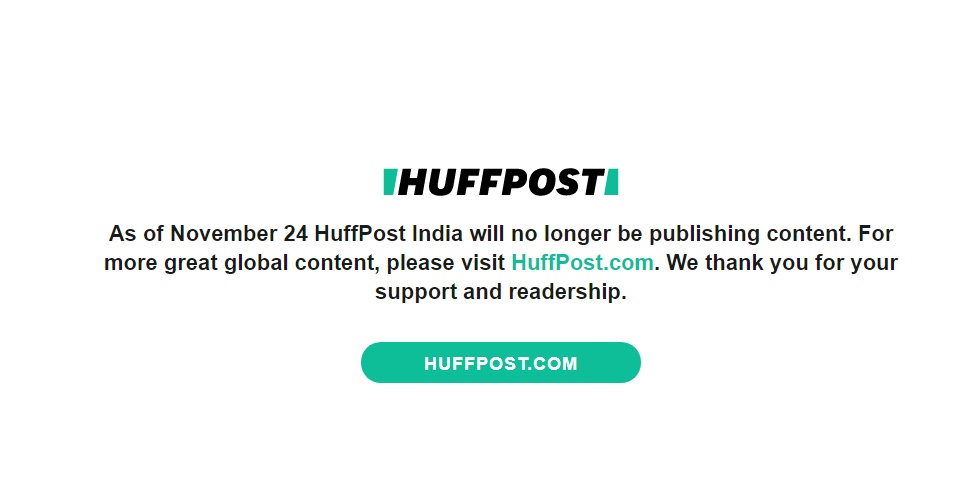 HuffPost has been acquired by BuzzFeed, but HuffPost India and HuffPost Brazil will not be initiating the transformation as both sites have closed down today. An exposition on its website shows, “As of November 24 HuffPost India will no longer be publishing content. For more great global content, please visit HuffPost.com. We thank you for your support and readership.”

“Today is @huffpostIndia’s last day,” tweeted the team’s editor in chief Aman Sethi. Furthermore, The Daily Beast’s Maxwell Tani tweeted what appeared to be an internal comment from BuzzFeed CEO Jonah Peretti, who said that the company wasn’t “legally allowed to take on the Brazil and India editions” — he claimed that “foreign companies aren’t allowed to own news organizations” in India, while BuzzFeed cannot operate in Brazil as one of the conditions of selling BuzzFeed Brazil.

According to the latest dictates introduced by the Union Government, FDI in digital news is capped at 26%; move aimed to limit “foreign influence and interference in India’s domestic affairs, check Chinese and other overseas funding in news sites” and “create a level-playing field for all media”. While it’s certainly true that numerous news aggregating platforms have different levels of Chinese aid and will now be scrutinised. Some of them may also be forced to drop a bulk of their foreign funding and explore Indian partners instead.

The chief trigger for these and related reforms in other nations is the outsize impact and peril that social media poses to the sovereignty of a nation-state. Foreign troll manipulating news serves to reinforce surviving prejudices of citizens, false news masking as real stories are the results of a liability government where the platform is considered agnostic to whatever is posted on it.

Earlier this month, The Indian government circulated an order declaring the regulation of online news portals and content providers such as Netflix under the authority of the Ministry of Information and Broadcasting in a fundamental measure to regulate digital media. News on social media platforms such as Facebook, Twitter and Instagram will likewise befall under the ministry, as will audio-visual content on online platforms.

Kerala Amendment: Restrictions On Free Speech Should Be Couched In The Narrowest Of Terms

Right-wing and conservative factors in the nation, many of whom are the champions of the ruling regime, are characterising the move as removal of a spot as part of the Swachh Bharat Mission. HuffPost India in the past had been called Far-Left propaganda media organisation, and often cited of publishing unilateral stories by authors keeping left ideology. BJP supporters with nationalist agenda and their prime target had perpetually been to prove how HuffPost was incorrect on its opinions and facts in every written article on its platform w.r.t. issues about India’s internal security, economy, foreign policy or encouraging India’s deterrent power. They allege that while national identity is still strong, alternate and contaminated trans-national communities are not beyond the pale of imagination which could destroy Indian values.


The news didn’t go down well with the left and liberal Twitterati. The lot has been reminiscing the platform as one of the only remaining online news platforms that continually questioned the government by publishing the facts and truth, no matter what. The contemporary social media discussion centres about competing interventionist agendas. Conservatives in India want social media controlled to control the dissenters, while liberals & left tend to aspire them to exterminate unconstitutional content and address the pressing societal ills.

In the social media discussion, the predicament is not that some influencing powers are unchecked. Rather, the difficulty is that social media regulation—by both the left or right— would make it that way.
One of the intentions behind Atma Nirbhar Bharat is to create Indian corporate giants, to encourage them to become global players. This is not always possible without the help of foreign capital, particularly in a space where taking American, Chinese or South Korean funding is the norm. This is a fact that seems to escape the Modi government. The problem with regulating news on the Internet is it supersedes geographical boundaries. So, foreign entities sitting anywhere outside India can aggregate Indian news and consequently seek to influence or manipulate Indian readers and viewers.

Indian values, by constitutional values firmly support a nation of ideas where discussion and civil controversy can flourish. Therefore, the formulation of brand-new regulatory oversight bodies and satisfying obligations to exile politically disfavored opinions on the one hand, and attempts to push the incorporation of conservative content on the opposite, should both be discarded. This could direct to happening of group polarization which grabs grip when like-minded people communicate with one another and finish up imagining a more severe version of everything they believed before they began to talk. In fact, that’s a typical consequence. At best, it’s a dilemma. At worst, it’s deadly.