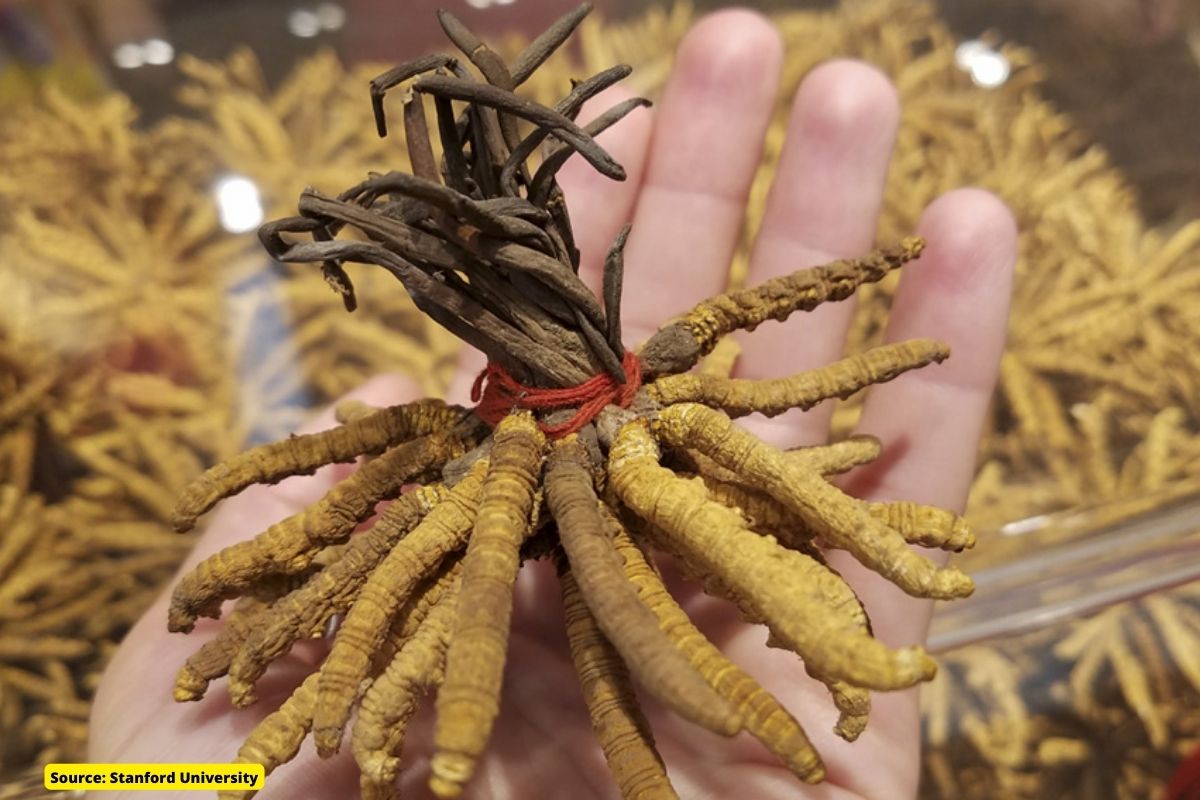 At first glance, you don’t feel like eating a yarsagumba at all. It’s a fungus, but it’s shaped like a worm. And it is not the result of chance. Because it forms when the fungus attacks and kills a caterpillar. Hence in Tibetan, it is known as ‘yart swa gun bu’: grass in summer, insect in winter. Although the first reaction to the idea of ​​putting it in your mouth may be to grimace, the truth is that few foods are more expensive. What’s more, yarsagumba is quoted at a much higher price than gold: a kilo can reach 90,000 euros.

The main reason why it is so appreciated must be found in the vademecum of traditional medicine of Asian societies, where ‘ophiocordyceps Sinensis appears as a powerful aphrodisiac, an effect that has given it the nickname ‘Himalayan viagra’. This fame is due to the belief that the yaks that eat the fungus on the slopes of the roof of the world acquire a sudden and excessive sexual appetite, which is also enjoyed by the human beings who consume it. As if that were not enough, yarsagumba is also considered an effective cure for all kinds of ills: from impotence to cancer.

This fungus (Ophiocordyceps sinensis) survives by lodging on ghost moth caterpillars (Hepialus humuli) to slowly kill them in some of the highest reaches of the Himalayas and can be found in a bowl of supposedly healing aphrodisiac soup made in Las Vegas. with a few grams and at a price close to 600 euros.

The demand for this mushroom as an aphrodisiac, a cure for impotence, and a remedy for the deadly virus of severe acute respiratory syndrome or cancer helped drive its global trade starting in the 1990s. Although it grows from scientifically proven benefits, people who boil this fungus in water to make tea or add it to soups and stews believe that it is a cure-all.

Since then, that belief in the wide range of healthful effects of the fungus has fueled a market valued at some €9.6bn, as crops have become unsustainable due to climate change. Not surprisingly, it was sold for 120,000 euros per kilo in Beijing (China) in 2017, which tripled the price of gold.

Official harvest records for ‘Himalayan viagra’ are unreliable because much of its trade goes through illegal channels. The new study presents the most comprehensive data to date on whether its production might be declining and the possible consequences of a potential drop on communities that depend on the fungus for their livelihoods.

Eric Lambin, a professor of Earth sciences at Stanford University, turned to the fungus to understand what happens when a specialized biological product gives wealthy consumers great influence over rural livelihoods, land-use choices, the land and ecosystems of the producing regions.

Research on ecosystem degradation tends to focus on the expansion of internationally traded agricultural products, such as oil palm, soybeans, cattle and timber, which are the main drivers of deforestation. The widespread effects of smaller-scale traded products are less well understood, but can potentially be profound.

Lambin puts rhinoceros horns as an example of this: “An emblematic species of mammals is becoming extinct due to the demand for a product that, in some traditional cultures, is considered to have virtues.”

Himalayan viagra may lack the charisma of a rhinoceros, but as one of the world’s most expensive biologics, it has become a primary source of income for hundreds of thousands of collectors.

Also Read:  Himalayan glaciers could disappear before the end of this century

According to Lambin, there is no doubt that intensive exploitation affects both people and the environment in an increasingly vulnerable landscape. While many local harvesters try to minimize impacts, the large influxes of people drawn to Himalayan grasslands during harvest season can end up degrading ecosystems by disturbing fragile soils, cutting down swathes of bushes and trees for fuel, and leaving litter around. . Of crops

Widely known in Tibet as ‘yartsa gunbu’ or ‘summer herb, winter worm’, the fungus has been used in traditional medicine throughout the Himalayan region and in China for centuries to treat ailments ranging from cancer and kidney disease to inflammation and aging. It has recently earned the nicknames ‘Himalayan viagra’ or ‘Himalayan gold’.

To get around the problem of scattered trade data for this valuable fungus, the researchers turned to collectors’ knowledge of production trends in China, Bhutan, Nepal and India. They then interviewed 49 foragers on the Tibetan Plateau.

Using this data and 400 records of where the fungus has been found in those four countries since the 1970s, the group built models that predict how much the fungus would grow in a given area based on factors like climate and elevation. The results show that the fungus tends to be more prolific in higher, cooler areas around the margins of areas covered by permafrost.

Currently, the fungus is abundant enough in the main production areas in the spring that many people can collect enough in a month or two to sustain themselves for the rest of the year. However, production is already in decline due to intensive harvesting and warmer winters may be exacerbating that trend.

In a region where winter temperatures in some places have already risen by as much as 4C since 1979 (“an enormous amount of warming,” Lambin notes), the researchers say each degree of winter warming makes it harder for the fungus to grow.

As permafrost disappears from lower elevations, the fungus can adapt by shifting to cooler habitats higher up only if its caterpillars and the vegetation and seasonal patterns they depend on also change.

However, if demand continues to grow as harvests decline, it could exacerbate tensions over who has access to harvest areas, says Kelly Hopping, a researcher in the University’s School of Earth, Energy and Environmental Sciences at Stanford.

“According to collectors in four countries, the production of caterpillar mushrooms has decreased due to habitat degradation, climate change and, especially, overexploitation. Our statistical models corroborate that climate change is contributing to this decline. They indicate that the caterpillar fungus is most productive in cold conditions and grows near areas that are likely to have permafrost. With significant warming already underway across much of their range, we conclude that caterpillar fungus populations have been negatively affected by a combination of overharvesting and climate change.”