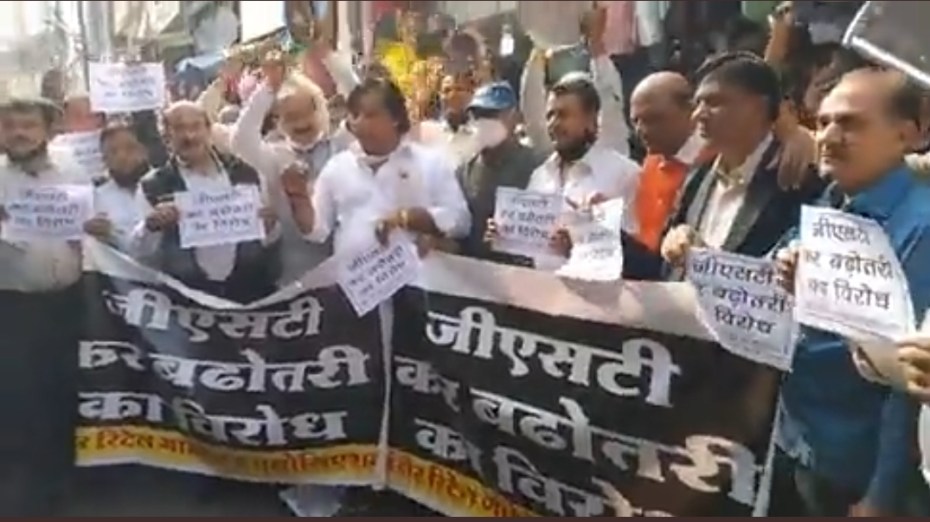 Ground Report | New Delhi: GST on clothes; Traders are getting angry over the increase in the rate of GST on textile items including readymade garments and clothes from 5 percent to 12 percent. Traders have been protesting the hike in different ways for the past few days and they closed their shops.

More than 100 textile traders were present on the occasion. Prominent among them were MT Cloth Merchant Association President Hansraj Jain, senior trader Girdhar Gopal Nagar and many others.

Under the banner of Ahilya Chamber of Commerce, 100 business organizations of the city are meeting on Monday. On Tuesday, MP Textile Traders Federation has also called a meeting in the city.

In this, the textile traders of all the districts of the state will decide the outline of the movement against the increase in the rate of GST on clothes. The MT Cloth Market Merchant Association had earlier put up hoardings outside shops in protest at the wholesale cloth market.

Three days ago, traders from all the markets around the Rajwada area protested and reached the office of the State Tax Commissioner. He handed over the memorandum addressed to the Finance Ministers of the Central and State Governments.

Madhya Pradesh Textile Traders Federation President Hansraj Jain said that for the past several days, textile traders have been opposing the hike in GST rates and e-way bills in various ways.

Indore is the largest textile market in the state, there is anger among the traders against the preparations to increase the tax. Traders say that due to an increase in tax, there will be an additional burden on the pocket of the public. Traders’ organizations will create a massive agitation among the public against this decision of the government. The same customers also want that the GST on clothes should not be increased, because the public is already upset due to the increased inflation.