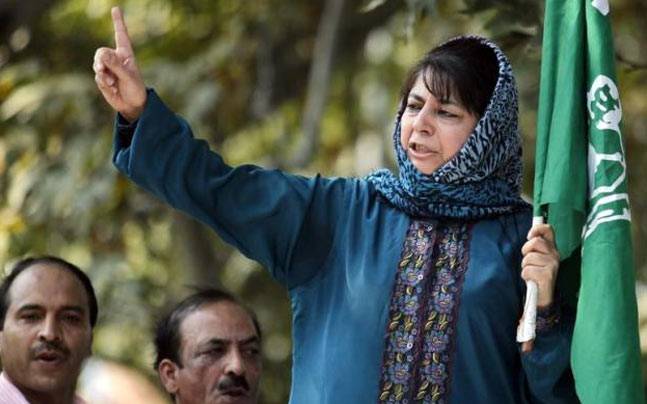 Former Jammu and Kashmir Chief Minister and PDP President Mehbooba Mufti has accused the Bharatiya Janata Party that it wants to implement the manifesto of its party in place of the Constitution of India.

Talking to reporters on Friday, she said that on August 5, 2019, Farooq Abdullah’s National Conference and political alliance formed with other smaller parties will continue to fight against the ‘occupation of the legal and constitutional rights of Kashmir’.

On August 5, 2019, the Modi government abolished the status of a special state given to Kashmir under Article 370 of the Indian Constitution and ended the state of Jammu and Kashmir and divided it into two union territories.

The Mufti termed the decision of the Government of India as ‘Dakazni’ and said, “We will not raise the Indian flag until we get our (Jammu and Kashmir) flag back.”

Reacting to Mufti’s statement, Union Minister Jeetendra Singh has said that many mainstream leaders of Kashmir are more dangerous than separatists.

In a statement, she said, ‘Mehbooba Mufti claims to be a mainstream politician but has trouble raising the tricolor. We have been saying for many years that Kashmir’s so-called politicians are sometimes more dangerous than separatists.

‘Under Article 370 of the Constitution, the special state status that Kashmir enjoyed, it also had the right to keep a separate flag of the state

Mehbooba Mufti said that the decision to end the partial autonomy of the state and reduce the status of the state and divide it into two union territories has caused the most mental shock to the common Kashmiris.

She said, “The BJP government is trying to discredit pro-India politics in Jammu and Kashmir, but my workers are firmly adamant. My party is also untouched except for some people who have gone astray.”

59-year-old Mehbooba Mufti accused the Modi government of failing to solve the urgent matters of the country.

Attacking the Modi government, he said, “When the government fails to handle the economy and empower the people, it targets the minorities and Kashmir.”

She said that if the issue of Kashmir is not resolved then its consequences will be very serious.

She said, “My father Mufti Saheb (Mufti Mohammad Sayeed) dreamed of a peaceful solution to the Kashmir problem. You cannot imitate a pigeon that closes its eyes in front of a cat. If you close your eyes If the cat will eat you. The Kashmir problem needs to be resolved. It has given rise to other concerns like Ladakh due to lack of this problem. “

According to Mehbooba, the Government of India understands that the people of Kashmir can be sacrificed.

She proved that they only want our land and not our people. We don’t like it and this way Can’t walk. Millions of people have lost their lives for peace and honor. This sacrifice of theirs will not go in vain.”

Mehbooba Mufti emphasized that bringing back the constitutional autonomy of the state is a political battle.

She said, “This is a long battle. All politicians have come together, now people should also become one. We will do it together.”