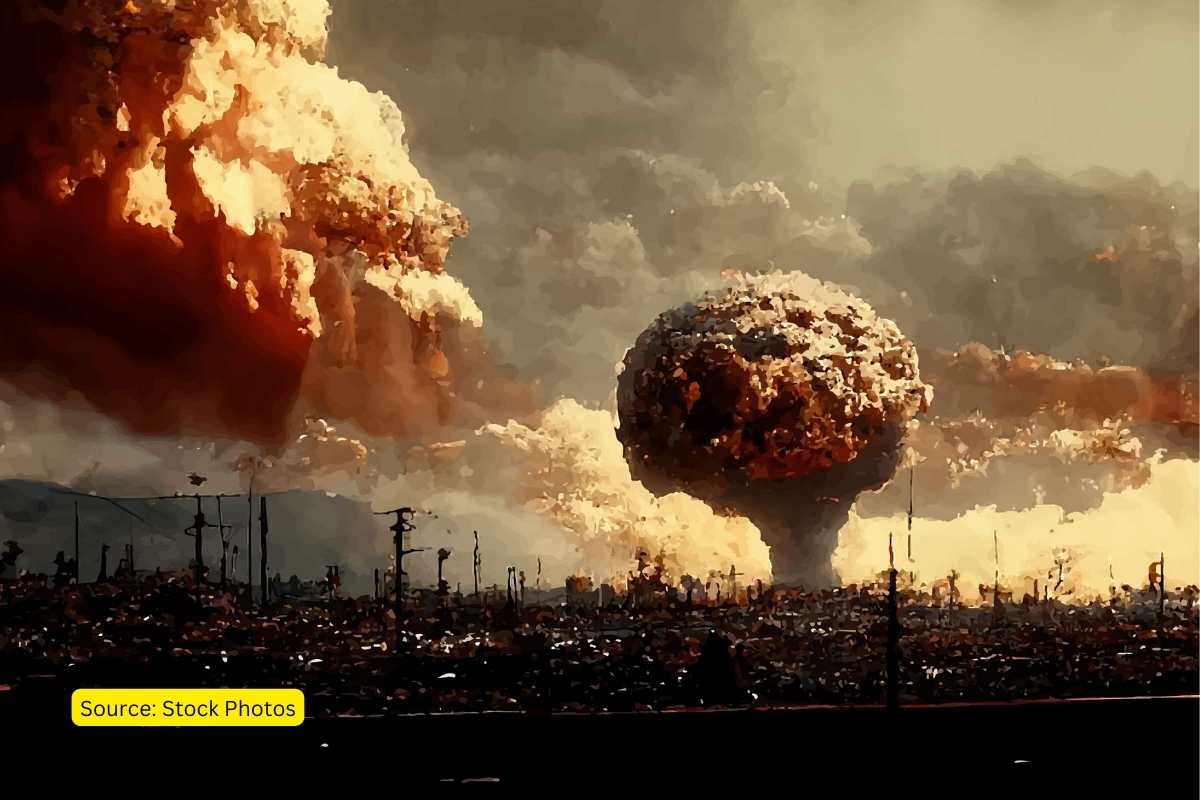 Although the stockpile of nuclear weapons globally has significantly reduced from about 60,000 during the Cold War years to about 12,705 today. Although, the threat they pose to life, property, and the environment still exists and is wide-ranging. This is because, the big league of nuclear powers like the USA, Russia, and China is still working on increasing their nuclear arsenal in capability as well as size.

According to the SIPRI Yearbook 2022, the number of nuclear weapons will also increase in the coming decade.

The first step of the generation of nuclear weapons is uranium mining, which can be done in three ways, open pit, underground and in-situ leach (ISL).

Open pit mining has a huge footprint as it is directly in contact with the top layer of the soil and even the atmosphere. Underground mining poses a great threat to the local aquifers and contaminates them. ISL on the other hand, although has a certain amount of surface footprint, is far more sustainable than open cast and underground mining in terms of its environmental impacts. The by-products from such mining facilities are known as tailings. They are responsible for the contamination of the surrounding areas. They expose the soil and water resources to not only radiation but also very heavy metal contamination.

Read more: Uranium: How is it Mined?

According to Al Jazeera, about 1/4th of the test conducted was detonated into the atmosphere. This leads to the spread of radioactive material directly into the atmosphere. Such radiation can be carried away for much longer distances from the site, through wind and water. And, if contaminated can significantly harm plants and animals in the ecosystems.

Read more: Infographic: The impact of nuclear tests around the world

Radiation has the potential of remaining in the soil for several years making it unsuitable for any sort of life, agricultural activity, etc. This with the ever-increasing nuclear war threat on a global scale poses a huge food crisis problem.

Radioactive particles tend to move up the ecosystem through plants and animals of the affected area and lead to bioaccumulation in the food chain. This can be seen in the lifeforms of the land as well as the aquatic world.

Genetic deformities are very common among the affected wildlife population. In addition, a major impact of this is a reduction in reproductive success. This has the potential of increasing the threat of extinction of species in a world where 900-plus species have already gone extinct in the last five centuries.

Nuclear weapons can instantly wipe off the targeted area’s plant and animal population, uprooting trees and years-long vegetation cover, and claiming the lives of every life form in sight.

According to National Geographic, a genetic mutation can be seen in a variety of life forms and, marine organisms in radioactive seas are far more susceptible.

The term “nuclear winter” was first coined by Carl Sagan, an American scientist. He talks about the climatic effects of a nuclear war on planet earth. His theory claims, that the fire ignited using nuclear weapons could be so devastating that the soot and black smoke would rise up into the sky, up to the upper stratosphere, and cover the sky globally for a matter of years!

The result would be a cold and dry planet with no sunlight, leading to mass starvation globally. The ozone layer is expected to be depleted at a much faster rate, exposing the earth to ultraviolet radiation, and causing far-ranging consequences.

The recent studies with modern climate models believe that the theory is correct and the studies say the impact could last much longer than thought if a nuclear war was declared.

With the development of more and more megacities and industrial centers, especially in third-world nations, the risks of a global fire ultimately leading to the occurrence of nuclear winter have increased. Sources to fuel this fire can be found in industrial hubs, oil refineries, and mining centers. Not only cities, forests, and agricultural land are also prime targets as they are a source of fuel for fires.

The five official nuclear weapon states of the world – USA, Russia, UK, China, and France issued a joint statement at the beginning of 2022 saying “A nuclear war cannot be won and must never be fought.” This preceded the Russian invasion of Ukraine by a month. Ever since the overall threat of Russia using nuclear weapons has been on the rise. Kim Jong Un, the North Korean dictator recently made his intentions to counter US threats by using nuclear weapons shortly after North Korea test-fired an intercontinental ballistic missile.

The doomsday clock, representing how near we are to a man-made global catastrophe, is said to be only 100 seconds to midnight. Ever since 1947, the clock has been a metaphor for threats to humanity. It is believed that we are only 100 seconds away before the clock strikes midnight. That is to say, before destroying our planet as a consequence of technological advancement by the human race.

According to members of the Bulletin of Atomic Scientists, the clock is influenced by factors like climate change and nuclear warfare risk. By looking at the facts above, we can be certain that despite the clock being just an arbitrary symbol, the risks it points out are very real and need to be addressed on the global platform.

It is better to move towards disarmament than to be wiped off the earth as a consequence of someone pushing the nuclear button.