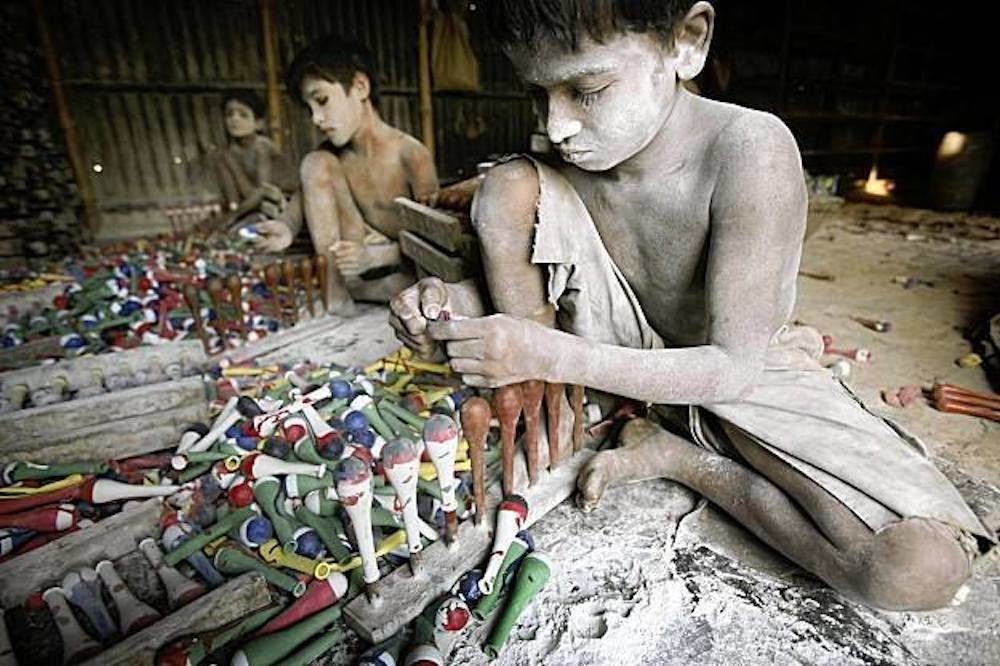 Ground Report | New Delhi: Child labour persists in India; Raju, 13, does not have time to go to school. He works with her mother in their one-room home from 6 a.m. to 11 p.m. carefully gluing tiny, faux gemstones onto fabrics for a nearby garment factory. “I don’t like doing this job. It hurts my eyesight and my fingertips are sore,” Raju Kumar sitting cross-legged on the floor of a working child center run by a charity in the Poonch district of Jammu and Kashmir. “But if I don’t, my mother gets mad. He tells that if we can’t finish all the work, we won’t be able to eat.”

Raju’s difficult situation is the same as that suffered by millions of child labourers around the world. World leaders pledge to end child labour by 2025, as part of the UN’s Sustainable Development Goals (SDGs) to improve the lives of the poorest.

Fourteen-year-old Danish Hilal works as a domestic helper in the house of a Srinagar-based government employee in the Kashmir area of Jawahar Nagar. His younger sister embroiders shawls in an unregistered textile venture in her native village of South Kashmir.

Danish while speaking to the GroundReport.in about his situation he said “when my father first brought me here, my employer promised to send me to school but till date, I don’t know when will the day come and I will go to school”.

Over the past decade, India has made considerable progress in curbing the exploitation of child labor. Laws have been introduced to protect children and ensure their schooling, and social benefit schemes have been designed.

Census data shows that in 2011 there were 4.35 million working children between the ages of 5 and 14, compared to 12.66 million a decade ago. Figures that, according to activists, are below reality.

According to a February report from the International Labor Organization (ILO)Of the 168 million child laborers in the world between the ages of 5 and 17, 5.7 million are in India. More than half of the children work in agriculture picking cotton and sugar cane, and in rice fields where they are often exposed to pesticides and at risk of injury from sharp tools and heavy equipment.

A quarter of them work in manufacturing companies, crammed into barely ventilated and poorly lit rooms in the poorest neighborhoods, embroidering fabrics, weaving rugs, making matches or rolling bidi cigarettes. Children also work in restaurants and hotels, washing dishes and cutting vegetables. Or sweeping and mopping floors in the homes of middle-class families.

Of the 168 million child laborers in the world between the ages of 5 and 17, 5.7 million are in India

However, the law presents some exceptions. Children who help their families in family businesses can work outside school hours, and those who collaborate in leisure and sports activities can work as long as it does not affect their education.

The government says the exceptions are aimed at striking a balance between education and India’s socio-economic reality. “In a large number of families, children help their parents in activities such as agriculture, crafts, etc. So, while they collaborate with their parents, the children also learn the basics of these activities, “said a government statement last May.

The government also approved tougher penalties for employers, with jail terms of up to two years and fines of 50,000 rupees for first-time breakers. However, the changes would free parents from fines for crimes committed for the first time.

According to the ILO report, 54% of working children in India between 7 and 14 years of age work without pay within the family unit and in such jobs. (Child labour persists in India)

The implementation of the new law will in fact create a legal vacuum that will leave out more than half of the working children in India, say the activists. It could also encourage more children to enter the black economy and encourage small businesses to outsource work to family units, they warn. Not only will it be impossible to control the hours and type of work that children do at home, but employers will take advantage of the unclear definition of “family” because many children are immigrants and do not have an identity document, they add.

Even if children go to school, research shows that a large percentage of those who work and receive full-time education end up dropping out due to an accumulation of fatigue, experts say.

It is difficult to know the exact figures of how many minors are working illegally because most operate in the informal sector of the economy, the one in which no one records anything. The authorities say that it is about 10 or 12 million children, but human rights organizations such as Save The Children or Friends Of Salaam Baalak increase that number to three or six times more. What is the fate of those children? Agriculture, cloth and clothing workshops, brick factories, domestic work in someone else’s houses, or garbage collection.

India is the world’s largest producer of mica, with a production representing 60% of the global volume. Raghuvanshi explains that “the exploitation of children in the mines is very common because due to their short stature and with their agile hands they are able to enter the caves more easily, and allow the selection of small fragments with greater speed”. According to Mishra, children face numerous dangers “linked to working in illegal and unregulated mines, long-term health risks and illiteracy.”

“It is a type of slavery”

Several non-governmental organizations that support children such as the international Save the Children or the Indian Bachpan Bachao Andolan (BBA, Movement to Save Children), of the Nobel Peace Prize winner Kailash Satyarthi, have also shown their rejection.

Save the Children opposed this amendment because, according to them, the ultimate goal should be “an absolute ban on child labor”, while the BBA called the rule “a missed opportunity for millions of children.” (Child labour persists in India)

“The definition of family and family business in the law is deficient;  this clause is shielded by the values ​​of the Indian family to justify the economic exploitation of children, ” Satyarthi said in a statement.

With some  50 million child laborers, India is the country in the world with the highest incidence of child employment, a figure that has fallen by 10 million in recent years, according to BBA estimates. The Indian Government assures that this drop was even greater, going from the twelve million exploited minors that the country registered in 2004 to five million today.

Although education is compulsory and free in India for children up to the age of 14, widespread poverty forces families to prioritize putting food on the table over sending their children to school. As a result, many children attend school irregularly or not at all because they have to work instead.