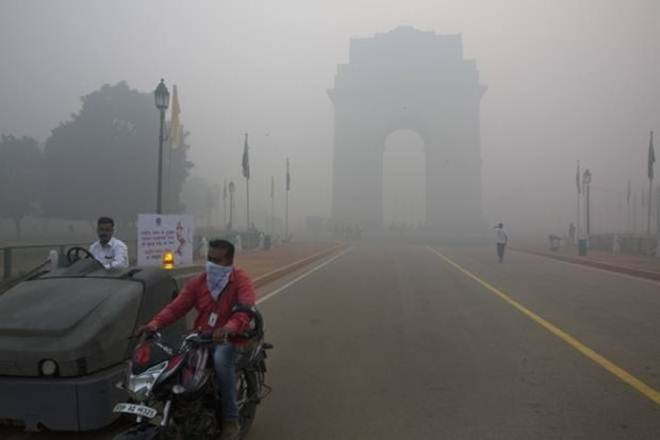 Ground Report | New Delhi: Clean Air for sale in Delhi; OxyPure, which claims to sell clean air in a mall in Saket, a wealthy area of ​​South Delhi, is the first of its kind in Delhi. Here people wait their turn to breathe in the fresh air for a few minutes.

Troubled by air pollution, Nishika Vaghila, who came to breathe in the clean air, said that when she felt something new, she decided to experiment. They felt refreshed after taking oxygen. However, their experience was good.

According to a report by Air Visual and SkyMate, two private air pollution monitoring agencies, Delhi became the most polluted city in the world for a few hours on November 15 and 16. When its AQI ie Air Quality Index was recorded at 527 and 500 respectively. More than 100 AQIs are considered harmful to health.

Agricultural yield will plummet due to the climate crisis

According to a report published in the journal Nature, an increase in PM2.5 levels in Delhi causes 7,000 to 16,000 premature deaths each year, while six million people become asthmatic. The PM2.5 level in Delhi is usually between 87 and 123 while the standard level should be 60. It reached 204 on November 16. It is eleven o’clock in the afternoon.

Oxygen is available in a variety of flavors, said Bonnie Erang Bam, head of OxyPure. For example, mint, cinnamon, orange, lemongrass, eucalyptus, and lavender. Accordingly, their price ranges from Rs 299 to Rs 499. Bonnie claims that taking oxygen eliminates toxins in the blood and helps fight depression. (Clean Air for sale in Delhi)

Dr. Amitabh Ghosh, a senior consultant at Columbia Asia Hospital, said: “The concept of selling oxygen to people at the bar is incomprehensible. If a patient needs oxygen, it is given under the supervision of specialists in the hospital. Oxygen is not something that anyone says I need oxygen to be given. In flavored oxygen, it is important to see which ingredients are in which flavor and in what quantity. ”

Arya Vir Kumar, a 26-year-old entrepreneur who owns OxyPure, says he saw such an oxygen bar during a visit to the United States in 2015, which led to the idea of ​​opening a similar bar in India. But here people express various concerns, so they only give oxygen for fifteen minutes.

Women Sex Workers of Sonagachi; their daily life and struggles

Due to air pollution, Children’s Day, which is celebrated on November 14 every year, had to be canceled for the first time. Air pollution in Delhi is causing people to have trouble breathing, sore throats, eye irritation, and headaches. The biggest worries are young children and the elderly.

Despite the dangerous level of air pollution in Delhi, political parties are busy blaming each other. The Supreme Court termed the Delhi government’s traffic pairing and odd scheme as an incomplete effort. The Supreme Court has summoned the chief secretaries of Punjab, Haryana, Uttar Pradesh, and Delhi on November 25 for disobeying its order not to burn crop residues.