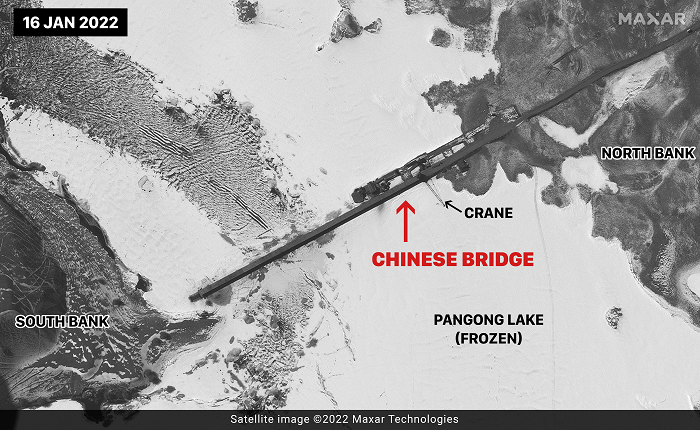 Ground Report | New Delhi: China in Pangong Tso lake; A new Chinese bridge being built across Pangong Lake is now more than 400 meters long and once completed, will give Beijing a significant military edge in a region that is a crucial flash-point between India and China in eastern Ladakh. Point being.

Media reports of #PangongTso allege a new bridge is under construction connecting the north & south bank of the lake, in turn enhancing road connectivity for #China’s troops in the area, GEOINT of the area identifies the location & progress of the alleged structure.

The construction of the bridge across Pangong, which was first identified by The Print earlier this month, and is shown for the first time in high-resolution satellite imagery, will allow the Chinese military to quickly mobilize troops on either side of the lake. gives capacity.

North Bank troops will no longer need to drive nearly 200 kilometers around Pangong Lake to reach their base at Rutog. That journey will now be reduced by about 150 km.

Pangong Tso, an endorheic lake, is 135 km long, of which more than two-thirds is under Chinese control. Khurnak Fort, where China is building the new bridge, is near the halfway point of the boomerang-shaped lake. (China in Pangong Tso lake)

Historically a part of India, Khurnak Fort has been under Chinese control since 1958. From Khurnak Fort, the LAC is quite west, with India claiming Finger 8 and China on Finger 4.

The north and south shores of the lake were among several friction points that surfaced after the start of the standoff. Before the withdrawal of troops from the north and south coasts of India and China in February 2021, the region had seen massive mobilization and the two sides even deployed tanks at some places barely a few hundred meters away.