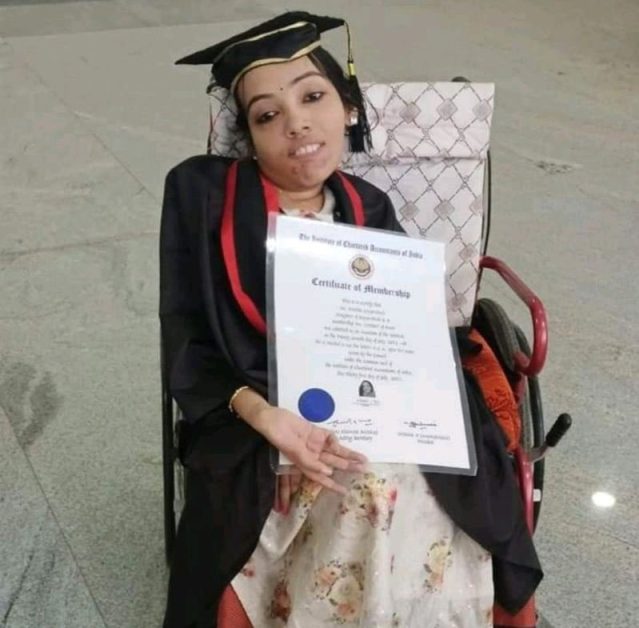 Ground Report | New Delhi: Preethu Jayaprakash disability; Preethu Jayaprakash, a Thripunithura resident who has been confined to a wheelchair with SMA disease, has become a chartered accountant with the enthusiasm to fight for those around her.

Preethu Jayaprakash is laughing heartily after defeating the fate of being confined to the corner of a wheelchair. She has been in a wheelchair since the day she was remembered. You need JavaScript enabled to view it. But Preethu completed her chartered accountancy studies, with more than half of those dropping out succeeding. After successfully completing her B.Com, Preetu entered Chartered Accountancy. Within five years the name was added to the CA.

Preethu Jayaprakash was born in Kuttanadu on April 30, 1994, the son of Jayaprakash and Radhamani. When he was 6 months old, her world fell apart: the baby couldn’t get up. Every time she tried; she would collapse to the ground. But the parents were encouraged by the fact that she may be part of her growth.

After all, babies usually trip and fall before learning to walk. But with each passing day, they began to feel more anxious when they realized that their daughter’s legs did not have the strength to support her. She stopped playing with her hands and legs after one point.

In an interview with Onmanorama, Preethu started asking about the CA institutes in Alappuzha. And the ones she found were all on the second floor, which was discarded due to their condition. She searched some institutes in Kochi, but they all had the same problem. She then found what she was looking for at the Palarivattom Logic Institute. When she informed them of her practical difficulty, they told her that the classes would be held on the ground floor.

Volunteering for People with Disabilities

When she was 6 years old, Preethu enrolled in the neighborhood private school. Her mother took her to school every day. It was then that little Preethu realized for the first time that she was a “special girl”, different from the rest of the students in her class. She watched silently when the rest of the students played. Just a casual hit from them was enough to make Preethu fall off the chair. When this became a regular event, her mother began escorting her to class. Her mother sat next to her while Preethu rested on her. That was always her biggest support system!

She is volunteering with the Mind Trust for People with Disabilities and is also taking online classes for them. For Preethu, who has always dreamed big, she is finally reaching the goal of being financially independent.