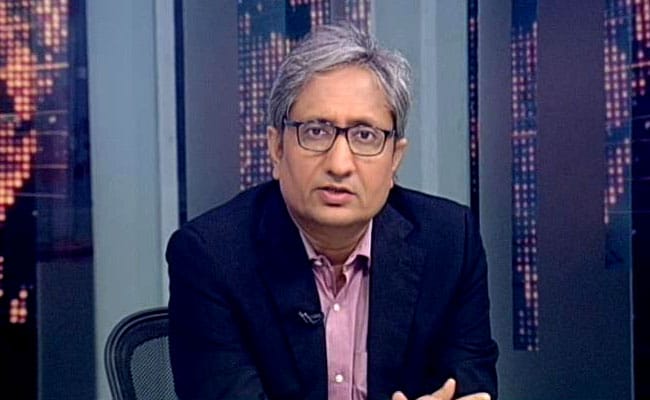 Ground Report | New Delhi: Politics of hate; In 2017, Ravish Kumar said that the politics of hatred is slowly turning innocent children into the murderers of tomorrow.

During a protest against the lynchings, Ravish Kumar said, “Not only cows, now some excuse is being used to kill innocent people and create an atmosphere of terror in the society. These people do not have a direct relationship with any political party, but they are from the same WhatsApp University from where the fake rumours come out.

Ravish said that he wants to warn society that these political ideologies are bent on turning their innocent children into murderers.

For the second time in less than a year in India, pictures of Muslim women have been put up for display on an app that appears to be an online ‘auction’. The name of this app created on ‘GitHub’ is ‘Bulli Bai’, which is an insulting term used for Muslim women.

Many women have since taken to Twitter to protest the harassment, especially of Muslim women in India. Hours later, the Indian government promised action.

What we know so far about Bulli Bai App case

Mumbai Police Commissioner Hemant Nagrale addresses a press conference on the arrest and progress in the Bully by App case on the afternoon of January 5. During the investigation, it was revealed that youth from Bengaluru, Vishal Kumar Jha was involved in the app case, and was later arrested.

In Uttarakhand, 21-year-old Mayank Rawal was arrested by the police in the early hours of Wednesday. Her involvement in Bulli Bai app came to the fore after the arrest of Shweta Singh, who was detained yesterday. Mumbai Police Commissioner Hemant Nagrale said Mayank is Shweta’s friend and more people may be involved in the matter.

Shweta Singh, who was arrested yesterday from Uttarakhand, is a 12th pass out from a school in Dehradun. India Today reported that he lost his father to Covid-19 this year and lost his mother to cancer sometime back. Shweta was detained from Udham Nagar district and the police had sought her transit remand till January 5.

As India Today reports, the question of other people takes us to Nepal, from where a Nepalese national, GU, was allegedly monitoring and guiding the stuff being put on the app by Shweta Singh. Shweta is said to be operating at least three accounts; One of the fake Twitter handles is ‘Jatt Khalsa07’.

Victims of Bulli Bai App have expressed regret over the involvement of young students including a woman in this crime. Controversy victim Sania Syed wrote on Twitter that if small children are involved in these crimes then society has collectively failed.