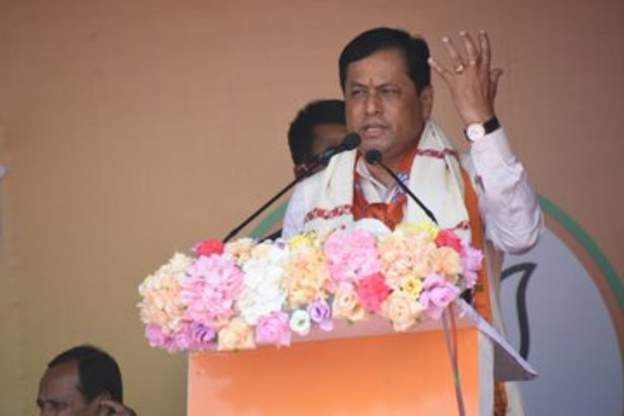 Assam Chief Minister Sarbananda Sonowal has said that ‘BJP is an anti-Muslim party – this is a myth’.

He said, “The party follows Prime Minister Narendra Modi’s slogan ‘Sabka Saath, Sabka Vikas, Sabka Vishwas’ and no man was denied the benefit of government schemes anywhere in the state.”

In an interview given to The Hindu Sonowal, 59, said, “We have maintained the spirit of democracy and the principle of secularism. But we have to identify the enemies of Assam. We will never allow such forces which are not only a threat to the nation, but also to our art, culture, land and language. ”

Sonowal has filed his nomination from Majuli for the upcoming Assam assembly elections.

Sonowal’s five years in the BJP-led Grand Alliance government survived massive corruption charges, but he faced challenges such as the NRC and CAA.

Sonowal’s rivals say that CAA will lead to a flood of Bangladeshi Hindus in Assam, which will be a big challenge for the local culture and language of Assam.

But Sonowal believes that the people of the opposition are deliberately making the CAA an issue. He said, “This is like making sesame palm.” Some elements are laying a trap of lies around the CAA to serve their personal interests. Some said that because of CAA one crore Hindu Bangladeshi will come to India. Some say it is two crores. But over time, their lies were revealed.

People saw this and gave us a clear mandate in Panchayat elections (December 2018), Tribal Council elections (January 2019) and 2019 Lok Sabha elections. People know that the CAA does not harm the integrity of the country. And we are not the first to amend it. Congress also did this.”

Also Read:  Why Tunisia abandoning Islam as a state religion?

But why do you think people will vote for you in the upcoming assembly elections? To this question, Sonowal said, “Because after we came to power, people saw the end of anarchy, corruption, nepotism, terror and middlemen rule and saw the beginning of good governance, peace, proper implementation of the schemes.” We do not claim to be perfect, but people have seen us working. We have taken cognizance of such issues which are most important for the people. This is the reason why people want us to take over the reins. There is no ‘anti-incumbency’ in Assam.”

In this election, there is a big coalition led by the Congress party in front of the BJP, which consists of eight parties. Badruddin Ajmal, who headed the All India United Democratic Front, has said that ‘his goal is to throw the BJP out of Assam’. Assam has about 35 percent Muslim population. Doesn’t all this make the electoral battle difficult for them?

In response, Sonowal said, “Congress and AIUDF are two sides of the same coin. Their ideas and principles are the same. They always support the forces that threaten the existence of our people. People have understood their structure and no matter how many parties there are in their alliance, people will reject them. People know who can give them peace, development and stability.