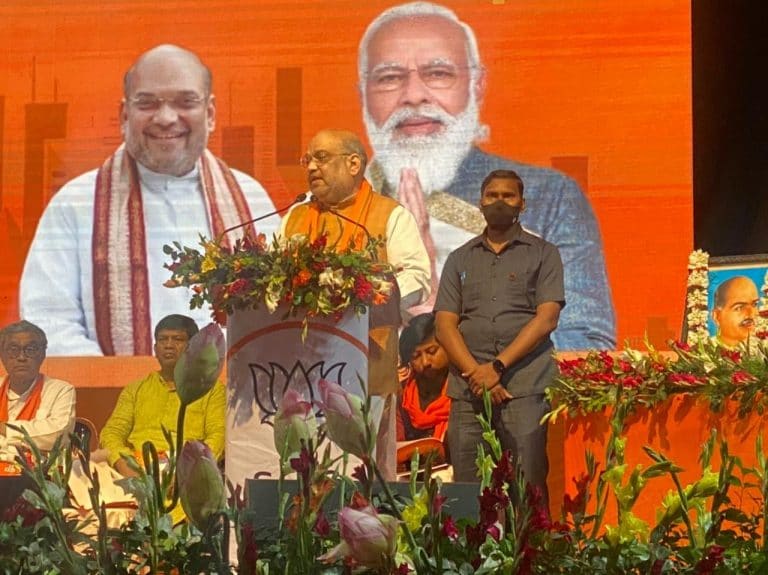 Home Minister Amit Shah today released the BJP’s manifesto for West Bengal. Shah named the manifesto ‘Sonar Bangla Sankalp Patra’ and said that all the promises are being made keeping the budget in mind.

Describing himself as a “tradesman”, he said “trust me”

Many schemes for women were enumerated in this resolution letter. Shah said that if BJP government is formed then 33 percent reservation in all government jobs will be given to women.

Apart from this, Shah said that, “For all daughters, studying from KG to PG will be free”.

He also promised to make public transport free for women.

“We have decided that the seventh pay commission in Bengal will be given to all employees.”

Regarding the farmers, Shah said that the money of the Kisan Nidhi which was not given in the Mamta government, the BJP government will give the entire money.

He said, “The benefit of PM Kisan Samman Nidhi Yojana will be available, as well as 75 lakh farmers who have not been given Rs. 18 thousand by Mamta didi for three years, will give it directly to the bank account of the farmers.”

Apart from this, he promised to give 6 thousand rupees to fish farmers every year.

Also Read:  What is the religion of Amit Shah?

He alleged that the people of Bengal could not get the benefits of Ayushman Bharat scheme.

Shah said, “In the first cabinet, every poor in Bengal will be given the benefit of Ayushman Bharat Scheme.”

“We have decided what kind of border security has been arranged so that the person, even from across the border, does not kill Parinda.”

“We have decided that the Citizenship Amendment Act will be implemented in the cabinet for the first time – under the Chief Minister’s Refugee Scheme, each refugee family will be given ten thousand rupees per year from DBT for five years.”

Shah accused Mamata Banerjee of corruption and said that an anti-corruption helpline would be started to deal with it and people would be able to lodge a complaint directly in the CM’s office.

He said that the Tagore Prize will be started on the lines of the Nobel Prize and the Satyajit Ray Award will be brought for films.

He said that the CAAA will be implemented in the cabinet for the first time only.

“Under the Chief Minister’s Refugee Scheme, every refugee family will be given ten thousand rupees per year from DBT for five years.”