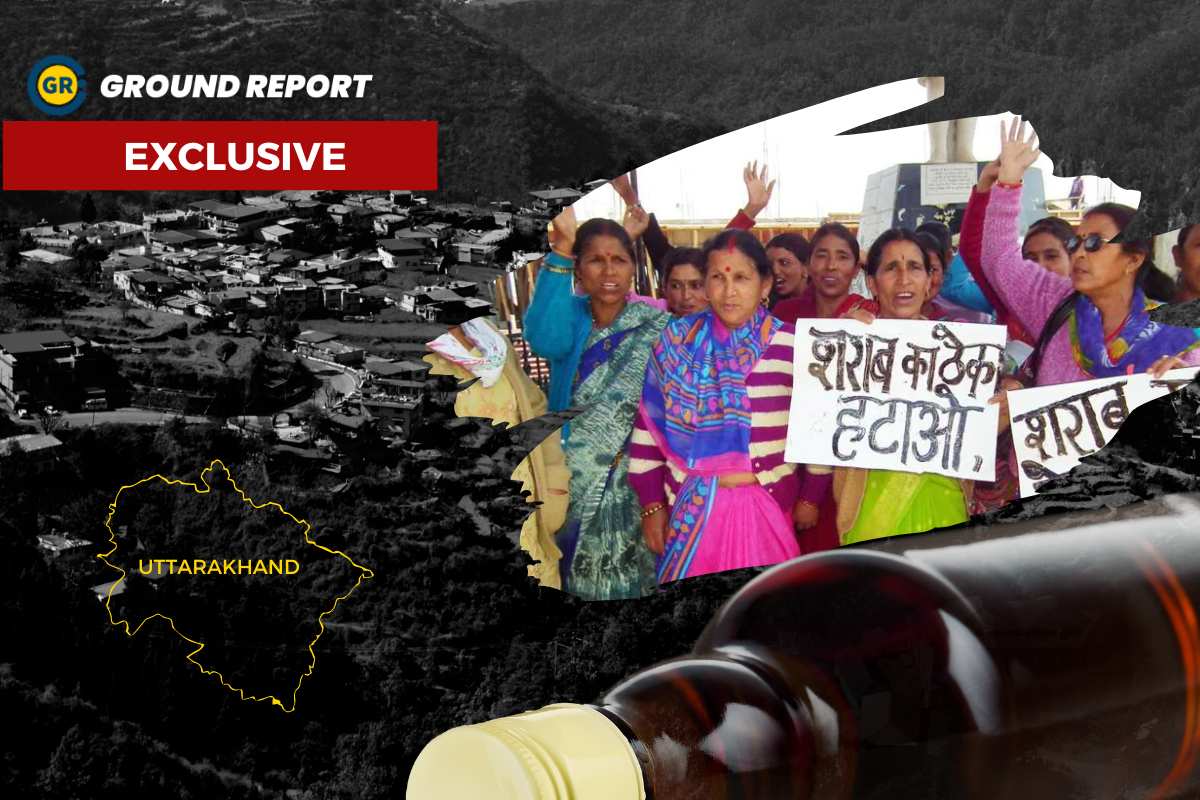 Babita Devi of Chaurasu village in Bageshwar district of Uttarakhand, who is also a panchayat member, says that –

‘Here people buy liquor through government shop in Garud. Now Liquor is also available in the village. People work as laborers during the day and beat their children and women at night after getting drunk.’

Often people think that it is common for people to drink alcohol in the mountains because their life is difficult, but here you are wrong because Kashmir is also a mountain and in North India, only 10.5 percent of people in Jammu and Kashmir consume alcohol.

Due to alcohol addiction, women are constantly becoming victims of domestic violence, and children are missing out on education.

“My life ruined since my husband started drinking, he spends all his money on alcohol, it has become difficult to run the household. He also used to beat me up. Once my husband got angry and threw clothes, bed and everything in the drain. Due to financial constraints at home, my children also missed their studies. They didn’t even have money to pay the fees. “

How Alcohol entered the Himalayan region?

You will be surprised to know that before the arrival of the British, the mountains used to be dry areas. By the year 1800, colonial officials were quite surprised to learn that the communities living in the mountains were completely alcohol-free. But soon hill stations started developing and liquor started reaching the mountains. During the Second World War, free stalls of liquor were set up to give locals a taste of Liquor. soon the British established a liquor market here as well.

Distillation of country liquor started here and with time it became a major cottage industry of Uttarakhand.

Sangeeta tells that “Here in Garuda, liquor is available in the government shop. Alcohol is also being sold door to door. I request them not to give liquor to my husband”

Protests against Alcoholism in Uttarakhand

From time to time, there were agitations for a liquor ban in hilly areas, and slogans of ‘ Sharaab Nahi Rozgar Do’ echoed and got lost in the mountains. Tehri and Pauri were declared dry in the year 1970, which was overturned by the Allahabad High Court after a petition by a wine merchant.

There has always been an argument behind the movements that people in the hilly areas do not have the means to meet their basic needs, in such a situation, the increasing addiction to alcohol is further puncturing their economic condition.

Sangeeta tells that her husband’s alcohol addiction has pushed her family on the path of poverty, and now she also works in a school. From where some money is received, from which the house runs. When her husband did not use to drink, everything was fine.

Due to the social stigma attached to alcohol, people hesitate to talk about it. No help reaches those who seek solutions. The de-addiction centers are either in far-off cities or out of reach.

Babita Devi, a Panjayat member, says that when people harass women by drinking alcohol, she goes to their house with the sarpanch to explain to them, but the next day they start drinking again. The police also come and explain, but this addiction is such that people do not want to give it up.

To set up a market, the hill people are being pushed into a dark well of addiction. Women want to get rid of this curse soon but no one is ready to help them.

The women of the village say that it is very important to save their village from the clutches of drugs, if nothing is done now, the coming generation will also be ruined.